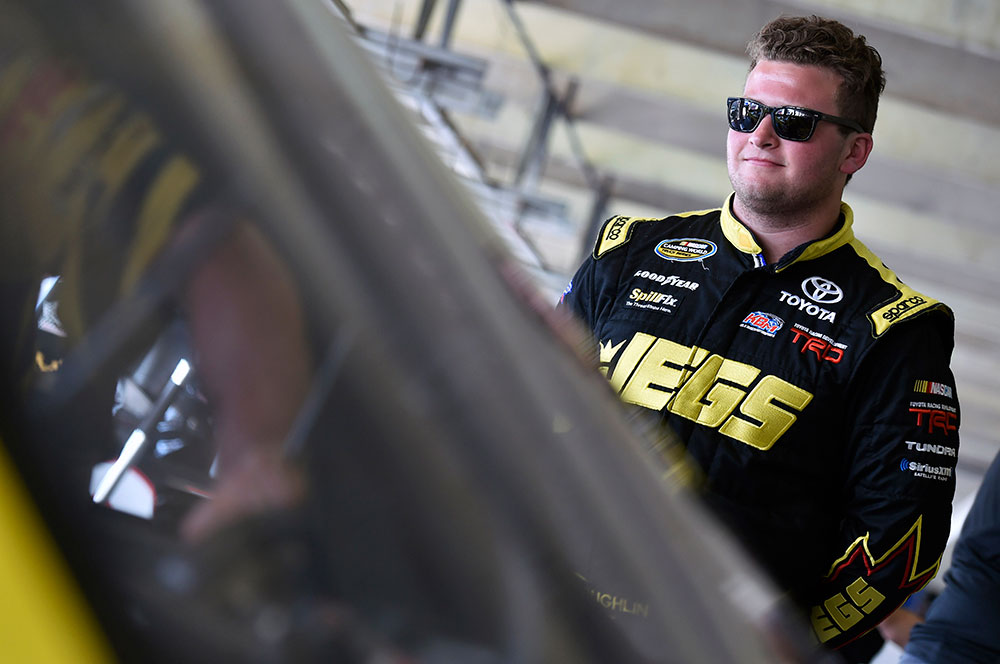 DELAWARE, OH – Cody Coughlin’s marathon week continues on Wednesday night at the NASCAR Camping World Truck Series Aspen Dental Eldora Dirt Derby at the famous dirt track of Eldora Speedway in Rossburg, Ohio. Coughlin will be back behind the wheel of the JEGS.com Kyle Busch Motorsports No. 51 Toyota Tundra for his maiden voyage on a dirt surface.

“I’ve never raced on dirt before,” Coughlin said. “This is going to be interesting, but I’m excited. I’m looking forward to trying something new and learning a new discipline of racing.”

The 20-year-old Delaware, Ohio native will lean heavily on his Kyle Busch Motorsports team throughout his two days at Eldora Speedway.

“My plan is to ask as many questions as possible,” said Coughlin. “I just want to learn and try to get a good finish. Fortunately, I’ve got a great team to learn from since KBM has won this race the last two years. While I have used pavement racing to climb the ladder, my teammate Christopher (Bell) has always been a dirt racer and I will definitely be watching him and others to absorb as much information as I can and apply it on the racetrack.”

Coughlin’s first laps at the legendary half-mile dirt oval will be on Tuesday in practice, beginning at 6:30 p.m. ET on Tuesday, July 19. The Joe Gibbs Racing Development driver will have two practice sessions on Tuesday night.

The dual Champion Racing Association points leader will then qualify and race the 150-lap Dirt Derby on Wednesday, July 20. Unlike any other NASCAR Camping World Truck Series race, this one will feature heat races to determine the starting lineup. The 150-lap race will be broken down into three segments.

After the Dirt Derby at Eldora is over, Coughlin’s marathon week will continue in his Super Late Model at Lucas Oil Raceway in Indianapolis on Friday night. His week will then conclude on Saturday night at Anderson Speedway in Anderson, Indiana in his Pro Late Model.

“I’m so lucky to have these kinds opportunities,” said Coughlin, who has four Late Model victories this year. “I can’t thank Kyle and Samantha and everyone at KBM enough for the opportunity to race their equipment. I know that Kevin Manion (crew chief) and all of his guys will give me their best, and I will do all I can to give them the finish they deserve on Wednesday. I also can’t thank my parents, Di and John, and my sister Kennedi, enough for all of their support. They’re my biggest fans and I’m so blessed to have them with me for this first venture into dirt racing.”

The Race
Wednesday night’s NASCAR Camping World Truck Series Aspen Dental Eldora Dirt Derby will be Cody Coughlin’s first race on dirt. It is a 150-lap race, broken down into three segments of 40, 50, and 60 laps. The 32-truck field will have their starting positions decided by five heat races to comply with dirt track tradition.

The Race Track
Eldora Speedway, known as “the Big E,” is a half-mile dirt oval located in Rossburg, Ohio and is owned by NASCAR Sprint Cup Series driver, Tony Stewart. Eldora was built by Earl Baltes in 1954. In addition to being the home of the Eldora Dirt Derby, Eldora is the home of some of the biggest races in dirt racing, including the Kings Royal, World 100 and Dirt Late Model Dream.

The Race Truck
Cody Coughlin and the No. 51 JEGS.com Kyle Busch Motorsports team will pilot chassis No. KBM-012. This will be the first race of 2016 for this chassis. KBM-012 has made 17 starts and has scored one win. In 2015, KBM-012’s best race came at Bristol Motor Speedway with the boss, Kyle Busch behind the wheel, where it started from the pole and finished second.

The Crew Chief
Kevin “Bono” Manion will be calling the shots atop the pit box for Coughlin this week. It will be the third race for Coughlin and Manion. Manion is an accomplished crew chief with a Daytona 500 championship on his resume. Manion and Jamie McMurray won the 500 together in 2009.

“Eldora should be interesting, but I expect it to be a lot of fun,” said Manion. “This is still a new race to the Truck Series, and of course this is Cody’s first time on dirt too, so there’s still a lot of unknowns. However, with the way Cody is quickly learning, I expect things to go pretty well on Wednesday night.”

The Season to Date
Cody Coughlin has seen plenty of success so far in 2016 on the Late Model side. The Joe Gibbs Racing Development Driver currently leads the points standings in both the ARCA/CRA Super Series and JEGS/CRA All-Stars Tour with four total wins between both series (three in Super Series, one in All-Stars Tour).