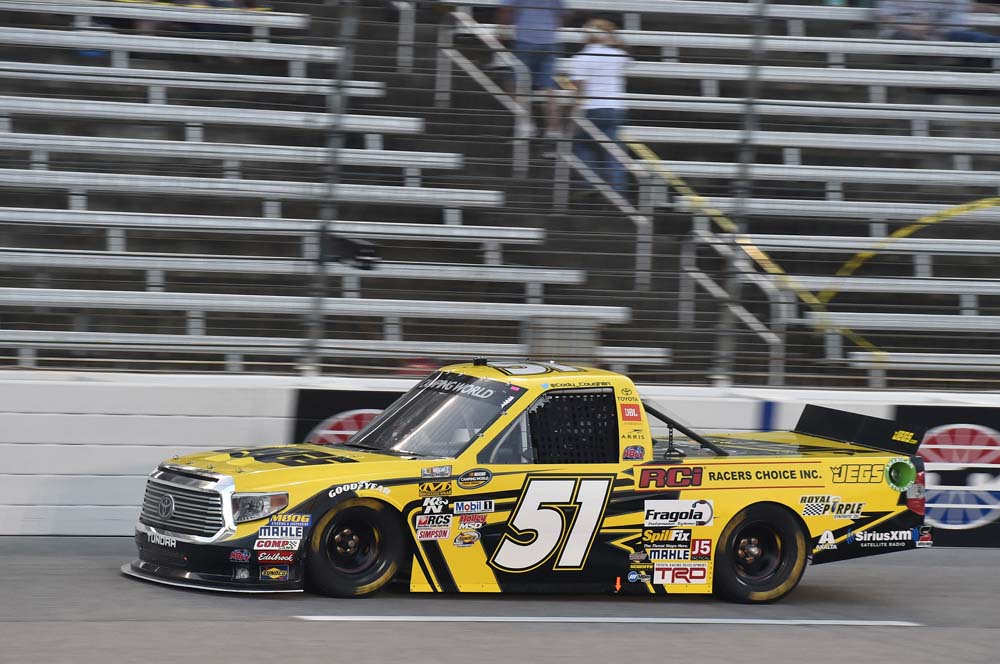 FORT WORTH, TX – Cody Coughlin had himself a solid night in the Lone Star State. Coughlin qualified his Kyle Busch Motorsports No. 51 in the 14th spot for his start Friday night at the fast Texas Motor Speedway in the NASCAR Camping World Truck Series. The 20 year-old knocked on the door of a top-10 finish throughout the Rattlesnake 400 and finished in 12th.

“This was a lot better than Kansas. I felt like we ran a lot better tonight,” said Coughlin. “I just need to get better on restarts and I think we’ll be good in the future.”

Coughlin and his JEGS.com/Racer’s Choice Inc. Toyota Tundra didn’t have the speed he needed on restarts, but after about five laps into a green flag run, Coughlin was as fast as the leaders.

“I don’t know if it was aero stuff or what, but I’ll learn from it for sure,” said Coughlin. “Overall it was very solid. I’m not ecstatic, but I’m not disappointed. I learned a lot from an aerodynamics standpoint and Bono (Manion) and the entire KBM team worked hard all day and I appreciate what they do.”

The Ohio native will fly from Texas to Marne, Michigan where he will pilot both his Pro and Super Late Models the rest of the weekend at the Berlin Raceway. His weekend will culminate in the Battle at Berlin 251 on Monday with the ARCA / CRA Super Series. Coughlin is the current series points leader.

“It’ll be really cool to get win at Berlin; I learned a lot from my boss at KBM (Kyle Busch) last year on how to race that place,” Coughlin said. “I haven’t been able to win there yet, but I think that’s what we’re getting ready to do.

“I just can’t thank Racer’s Choice, Royal Purple, Fragola, J5 Tactical, and MAHLE enough for coming on board and helping me and KBM out this weekend to make this all possible. Kyle and Samantha (Busch) and the entire KBM team give me an unbelievable opportunity to advance my career. And of course none of this would be possible without the love and support of my parents, Di and John, and my sister, Kennedi, and the blessings that our Lord has given us.”