Mooresville, NC – A new season is a fresh start, especially when you are a rookie in one of the top leagues in NASCAR, with one of the top teams in the sport. Add to that fact that Daytona Int’l Speedway (FL) will be the first start and it could be considered an adrenaline rush.

Today, Kyle Busch Motorsports is proud to announce that Cody Coughlin will pilot the no. 18 JEGS.com Toyota Tundra in the NASCAR Camping World Truck Series season opening event at the World Center of Racing. The NextEra 250 is scheduled for Friday, February 19.

The 20-year-old Coughlin will race an additional 10 races for KBM in 2016 behind the wheel of a KBM Toyota Tundra as a teammate to Daniel Suarez.

“I’m happy with everything that is happening, but to be able to race at Daytona again is really cool,” said Coughlin, a development driver for Joe Gibbs Racing. “If there’s one race that I had to pick, that would probably be it because I think it’s the most prestigious race of the year. We’re super stoked about it and I know we will be strong with KBM behind me.” 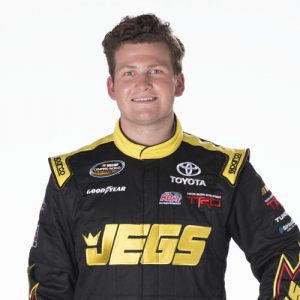 Coughlin has one prior start at the famed 2.5-mile superspeedway. He started on the front row and led many laps in the ARCA Racing Series event at Daytona in 2015 on his way to a fourth-place finish. Coughlin also has a pole and a second-place run at Daytona’s sister track, Talladega Superspeedway, in ARCA competition last year.

While ARCA cars are different from the trucks that compete in the NASCAR Camping World Truck Series, Coughlin is as confident as can be heading into the season-opening race at Daytona.

“It was definitely a good experience last year at Daytona and also at Talladega, which is comparable, to a degree,” said the Ohio native. “I know a lot is different from ARCA to the NASCAR Camping World Truck Series, but I feel pretty good about our chances right off the bat. It would be cool to snag one. I think that with all the hard work everyone is putting in, I think the JEGS.com Toyota Tundra will be ready to challenge.

“I just can’t thank my parents (John and Di) enough for everything they have done for me to get me to this point. I was truly blessed by our Lord to have such wonderful parents. I’m also extremely thankful for my car owner, Kyle Busch and everyone at Joe Gibbs racing, for believing in me and giving me the great opportunity that I have in front of me.”