Coughlin Heads Into ‘Dega with Championship Momentum on His Side 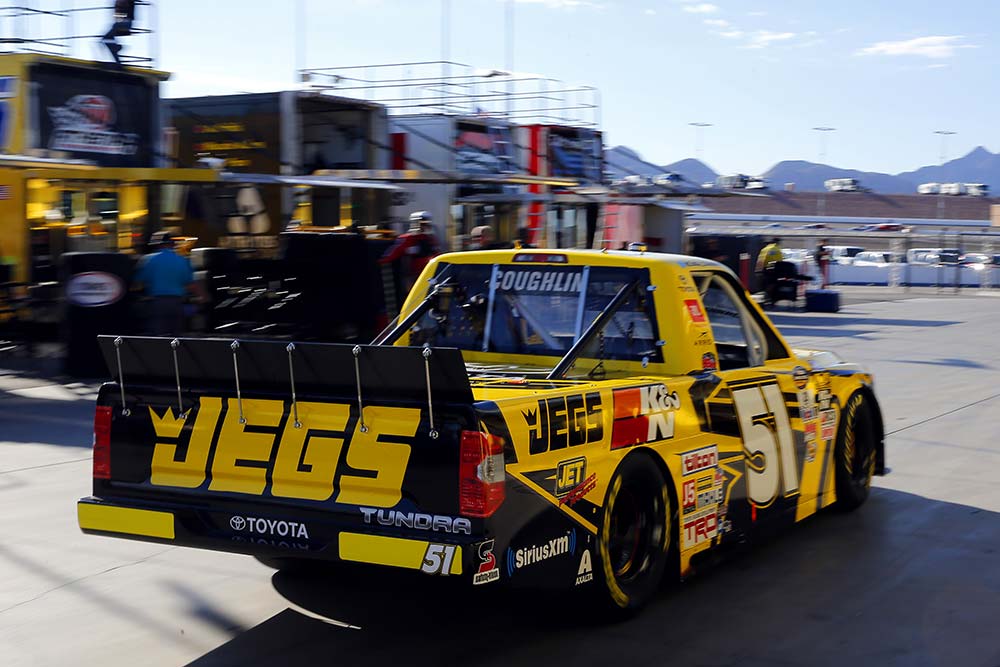 DELAWARE, OH – There has been a lot of buzz regarding Cody Coughlin on the short track racing scene in America. Now the 20 year-old is hoping that success will transfer on to the biggest track in all of NASCAR when he competes in the Fred’s 250 NASCAR Camping World Truck Series event at Talladega Superspeedway Saturday with Kyle Busch Motorsports.

Coughlin recently made history by becoming the first driver to win both Champion Racing Association Late Model touring series titles in a single season. He was crowned champion in the ARCA / CRA Super Series and the JEGS / CRA All-Stars Tour two weeks ago at Winchester Speedway in Indiana.

With the impressive accolades, Coughlin, a Joe Gibbs Racing Development driver, is looking forward to the race at Talladega in his No. 51 JEGS.com Toyota Tundra.

“There’s definitely momentum after the two Late Model championships,” Coughlin said. “There’s a lot of positive energy that I’m hoping will help us out this weekend at Talladega. I’m just hoping that we can steer clear of the big wrecks and be there at the end and maybe we’ll have a shot at the win if we do that.”

While Saturday’s race will be Coughlin’s first at Talladega in a truck, it won’t be his first trip to the 2.66-mile facility. Coughlin won the pole for the 2015 ARCA Racing Series event before finishing second.

“I gained a lot of confidence with that ARCA run last year,” Coughlin said. “I know that Talladega can be unpredictable and anything can happen, but running up front all day long last year made helped me a lot. I’m excited to be going back this weekend and hopefully we can do one spot better and be celebrating in victory lane.

“I’m very thankful that Kyle and Samantha Busch have given me the opportunity to race their trucks for much of this season. I’m very thankful for the effort that Bono (Kevin Manion, crew chief) and his whole crew put in for me all season. It’s been great working with them. Mom and Dad (Di and John) and my sister, Kennedi have sacrificed so much of their time to help me follow my dream this year. I’m very blessed in many ways. Hopefully I can pay everybody back with a strong finish on Saturday.”

Coughlin’s weekend kicks off on Friday, October 21 with first practice beginning at Noon CT. Final practice will begin at 2 p.m. CT and end at 2:55 p.m.