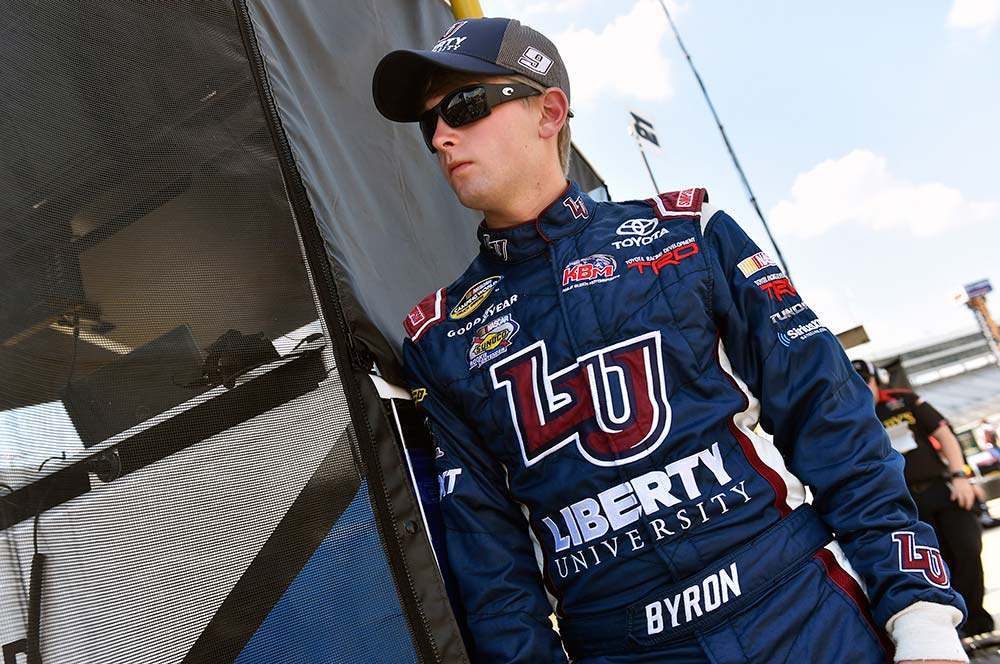 MOORESVILLE, N.C. (June 14, 2016) – William Byron had never raced at Kansas Speedway in Kansas City, or Texas Motor Speedway in Fort Worth until this year. The goal was for the 18-year-old rookie contender to run all the laps, log seat time and gain experience on the bigger, faster tracks and hopefully get solid finishes. Byron exceeded those expectations by winning both races in dramatic fashion at tracks where he was the underdog. This weekend, Byron heads to Iowa Speedway in Newton where he already has two starts and one win under his belt. If he could win at two tracks where he’s never been before, what are the expectations this weekend when he is familiar with the track? We will find out Saturday night in the Speediatrics 200.

Byron was not expected to win at Texas last weekend. He ran in the top 10 throughout the race and it looked as though he would finish there. With a few adjustments to his No. 9 Liberty University Tundra late in the race, Byron found his groove, literally on the high side of the track and gained speed. With 10 laps to go he passed veteran Johnny Sauter for second place and began closing in on veteran Matt Crafton who had dominated the race, despite a tire issue early. With five laps to go Byron passed Crafton and pulled away from the field until a late-race challenge from fellow rookie Rico Abreu. He was able to hold off Abreu to win the race after leading only six of 167 laps.
Last spring Bryon won the NASCAR K&N Pro Series East race at Iowa. He started from the pole and led 128 of 150 laps en route to the victory. His second trip there did not turn out quite as well in July when he finished 13th, but the additional experience he gained at Iowa will be beneficial when he hits the track Friday afternoon for practice.

His Kyle Busch Motorsports (KBM) team also has quite a bit of experience at Iowa. KBM drivers have collected two wins, two poles, 303 laps led, five top-five and 10 top-10 finishes resulting in an average finish of 8.6 across 15 starts at Iowa. In last year’s Truck Series event at Iowa, Erik Jones captured the pole and led a race-high 131 laps en route to the victory. Jones also led a race-high 112 laps in his 2014 victory at Iowa.

After winning at two tracks where you had never raced, how do you feel going to Iowa where you have already have a win?
“I think our strong suit this year has been going to different tracks and being able to adapt quickly, so going to a track I’ve been to before is going to help us get up to speed a lot faster and be able to work on the truck even more. I think it’s going to help us overall and help us be a little better for the beginning of the race. In the races we’ve won I feel like our truck was the best at the end of the race, so hopefully this weekend we can start the race as well as we finish.”

Did you expect to have this much success this early in the season?
“No, I was expecting Iowa to be the first place I might get a win just because it is a short track and a place I have been to before. To get two wins on two 1.5-mile tracks where I didn’t have any experience at all was a surprise. That was the biggest learning curve so far this season, so it’s definitely exciting to have those finishes and I’m ready to try and get more wins this year.”

Did you expect William to have this much success so early in the season?
“We expected to run top 10 or top five early in the season while William adjusted to the trucks and new tracks, but holy cow, two wins in the first seven races is pretty amazing. Kansas was a lot of speed and he had to do a good job. We almost lost it there on the last restart, but he got it back. At Texas he went out and earned it. We were decent and kept getting the truck a little better, but we weren’t prefect. He found the top groove, he decided to move around, he stood on the pedal there at the end and made it happen.”

KBM-031: The No. 9 Liberty University team will race KBM-031, for Saturday’s Speediatrics 200 at Iowa. This truck was most recently raced by Byron at Dover in May (finished 11th) and Martinsville in April (finished third).

Fugle has one win and one pole (Erik Jones, 2015), two top-five and three top-10 finishes, as a crew chief in three starts at Iowa. Fugle’s Tundras have led 112 laps and have an average finish of 4.0.