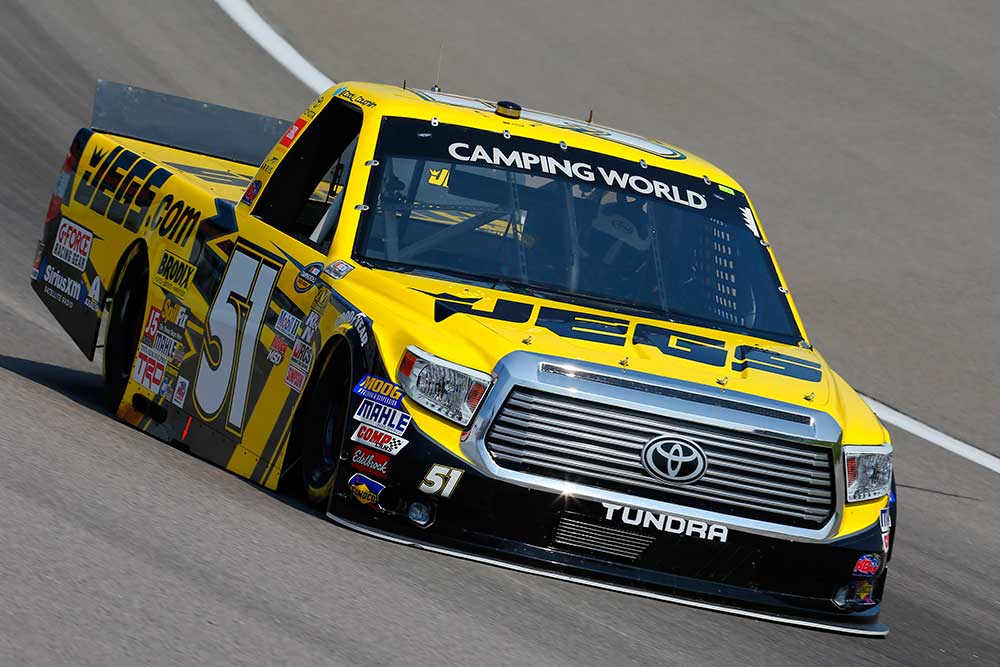 The Last Race
Cody Coughlin was victorious in April at a prestigious Super Late Model event at Toledo Speedway in Ohio. The Joe Gibbs Racing Development driver, started third, took the lead on lap 65 and led the remainder of the race to score the victory in the ARCA / CRA Super Series. The 20 year-old is the current series point leader.

The Race Track
Kansas Speedway is a 1.5-mile race track in Kansas City, Kansas that currently hosts two NASCAR weekends, but just one NASCAR Camping World Truck Series race each year. The track opened in 2001 with 15 degrees of banking in the corners. In 2011 the track was reconfigured with variable banking of 17-20 degrees in the corners.

The Race Truck
Cody Coughlin and the No. 51 JEGS.com Kyle Busch Motorsports team will pilot chassis No. KBM-030 at Kansas Speedway in the Toyota Tundra 250. KBM-030 has been raced eight times. It’s best finish came one year ago at Kansas when it finished seventh.

The Crew Chief
Kevin “Bono” Manion will be calling the shots atop the pit box for Coughlin this weekend. It will be the first race together for Coughlin and Manion, but they have already worked together at two test sessions this year. Manion is an accomplished crew chief with a Daytona 500 championship on his resume. Manion and Jamie McMurray won the 500 together in 2009.

“Everyone on the 51 JEGS.com team is looking forward to getting to Kansas this week for our first race working with Cody,” said Manion. “Although we haven’t worked together during a race weekend, we have had the opportunity to work with him for a couple of tests; one at Atlanta before the season started and most recently a two-day test at Bristol a few weeks ago. Those tests gave us the opportunity to get familiar with Cody and get a head start working on our communication as a team. I know that he had a top-five run at Kansas in the ARCA Series two years ago, so he’ll have a good baseline of how to get around the place. The trucks are more aero sensitive, so we’ll make sure after we have a good baseline setup that we get him out in a small pack of trucks to make some laps during the three practice sessions so he can experience the effect that aero has on the handling of his truck in traffic for the race. I don’t see any reason why the first time out with us Cody can’t run somewhere inside the top 10 for most of the race and then when he’s got some laps under his belt at the end of the race make his move forward.”