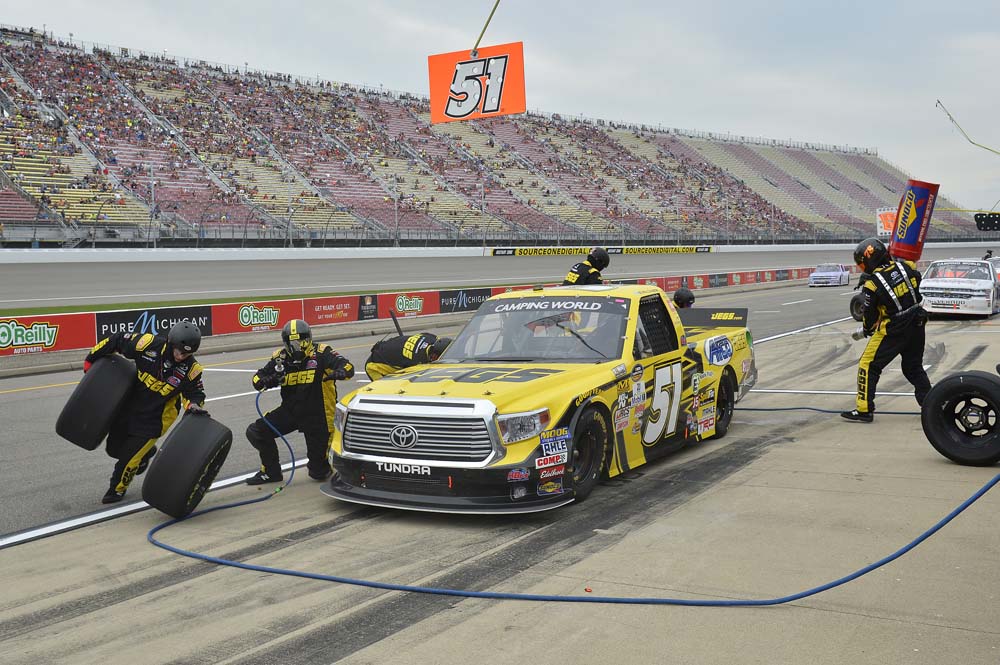 BROOKLYN, MI – Cody Coughlin was eight laps away from his first top 10 in the NASCAR Camping World Truck Series on Saturday at the Michigan International Speedway. After running near the top 10 for much of the Careers for Veterans 200, it appeared that Saturday was the day for Coughlin to check that goal off the list, but a late-race mechanical failure resulted in a 20th place result.

After a late restart with under 10 laps to go, Coughlin radioed to his Kyle Busch Motorsports crew that the engine was losing power down the straightaways. It was shaping up to be a career day for Coughlin in his No. 51 JEGS.com/AFCO Toyota Tundra until the issue.

The day started off with Coughlin’s career-best qualifying effort. For the first time in his short NCWTS career, the 20-year-old driver made it to the final round of qualifying. He started the 100-lap race from the 10th position.

After qualifying, the rain came and washed away all of the rubber laid down on the race track. Coughlin followed the directions of his crew chief, Kevin “Bono” Manion, and showed tremendous patience in the beginning of the 200-mile event.

The Ohio native began to make his way through the field and eventually found a spot to race in the top 10. The Joe Gibbs Racing Development Driver said he learned a lot and gained confidence going into his next race for Kyle Busch Motorsports at New Hampshire Motor Speedway next month.

“I think today was a good day,” he said. “I’m looking forward to going to Loudon and learning another new race track. I’m just thankful for all of the hard work from my team this weekend. I’m also very thankful to have owners like Kyle and Samantha Busch and extremely grateful to have the opportunity to race their equipment. My family is always right beside me too (parents, Di and John, sister Kennedi); God has truly blessed me.”

Coughlin was also scheduled to run the ARCA/CRA Super Series race at Flat Rock Speedway on Saturday night, but that race was cancelled due to rain. Coughlin is the point leader of the series.