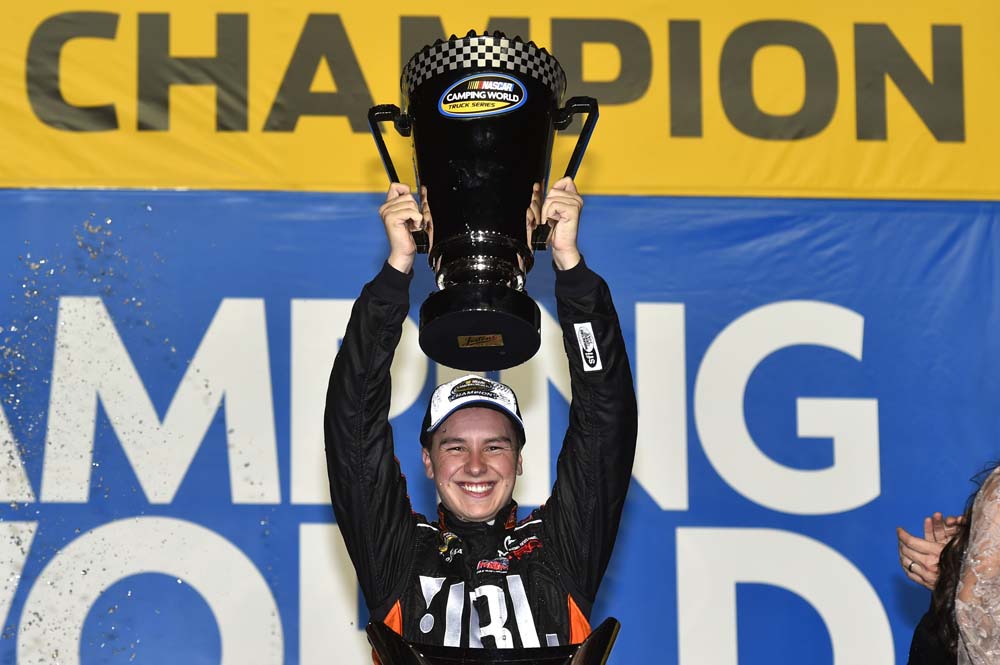 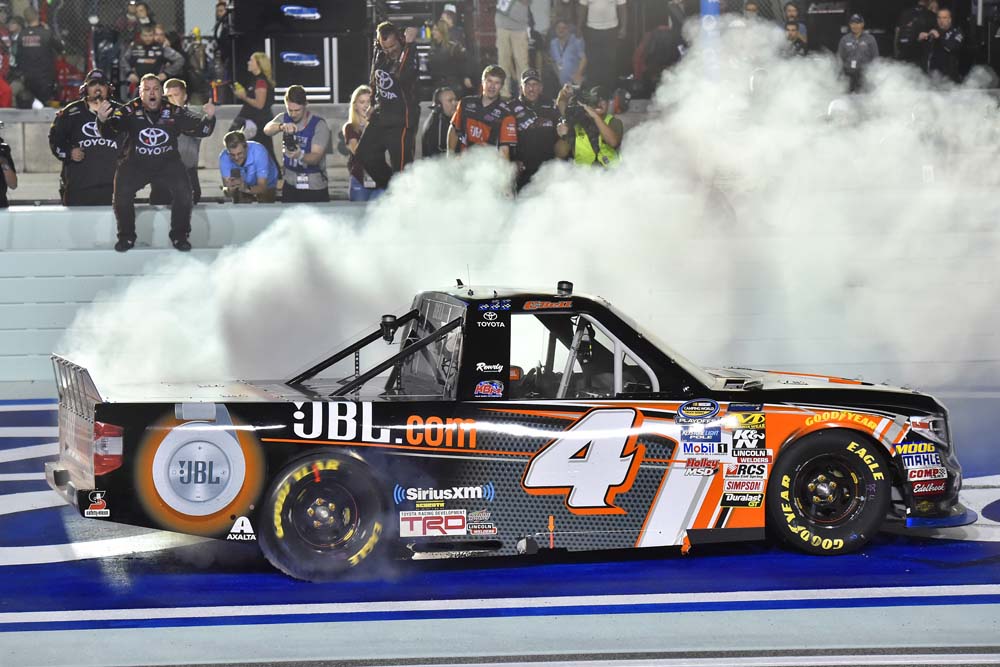 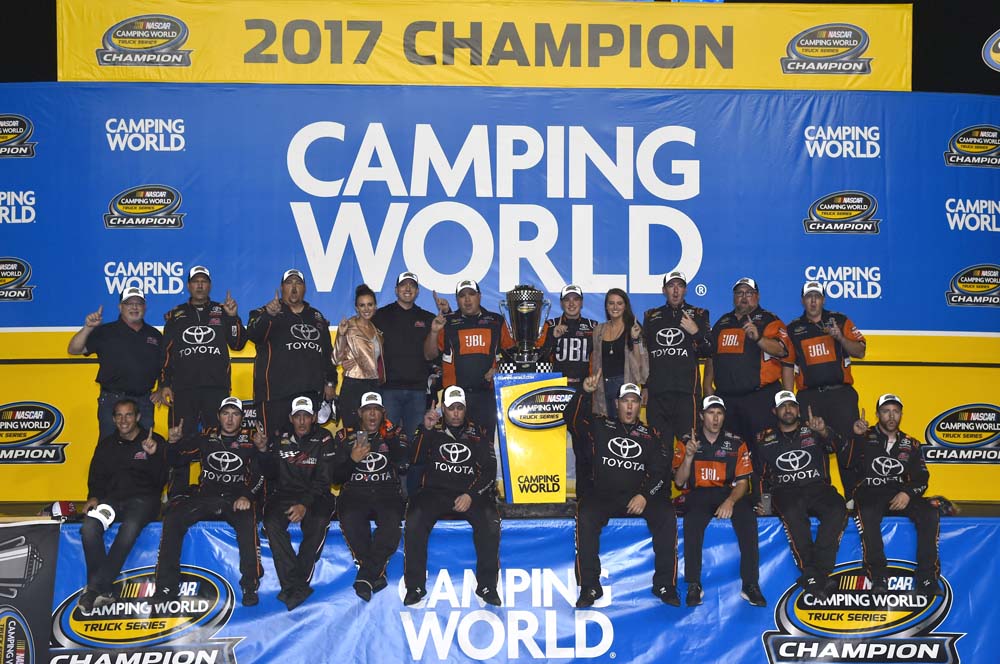 How does it feel to be the 2017 NASCAR Camping World Truck Series driver’s champion?

“Thank you, man. A dream come true just doesn’t even describe it. For me to be at KBM (Kyle Busch Motorsports) as long as I have and to go out a champion — that is something I’m really proud of. Really cool that we have our partners JBL here on the championship stage with us. They’ve been with me since day one of my Truck career and I’m really glad to have them here with us. Between JBL, Toyota, TRD (Toyota Racing Development), SiriusXM, DC Solar, everyone at KBM, man – these trucks are so good and they pay so much attention to all the detail into that goes into these things and that’s what makes these Tundras so fast. I’m just speechless.”

Can you describe this moment?

“There are no words to describe what this means to me. To be able to be here and to finish out my career at Kyle Busch Motorsports with the championship is something that I’m going to cherish for the rest of my life and, man, to be able to do it with JBL on the truck – they’ve been with me since day one and the start of my career. They were with me through last year and we had a struggle point there through the beginning and middle parts of last year and they stuck with me and believed in me and we were able to persevere and come away a champion a year later. Really, really blessed and thankful to be able to drive this JBL Tundra and not just a JBL Tundra, but weeks that I’m in the DC Solar Tundra, the SiriusXM, whenever we have Toyota on the truck – it’s just a dream come true to be able to drive for these guys and something I’m definitely going to cherish for the rest of my life.”

Kyle Busch, owner of the No. 4 JBL Tundra for Kyle Busch Motorsports:

What does it mean to you to help young drivers excel and win championships?

“It’s pretty awesome. It’s just a dream to come true to be a Truck Series owner and to have as much success as we’ve had as a young company.  It’s all a true testament to these guys – Rudy Fugle (crew chief) and everybody on the No. 4 truck and just as importantly everyone at home, everybody at Kyle Busch Motorsports that does such a great job working on these Toyota Tundras and making them as fast as they are every year. To be able to see Christopher (Bell) mature and grow and to get into the role that he’s in this year from where he was last year, it just goes to show you that these guys develop and we do good job of developing these guys and, you know, our first driver’s championship we’ll never forget was Erik Jones and now with Christopher Bell bringing home our second this obviously just continues to solidify our legacy in the Truck Series and what we’re all about and what we’ve been able to do. I couldn’t be prouder of Christopher and his family — congratulations to them and of course all the rest of the top-four contenders that were with us here racing for it today. We came out on top and we couldn’t do it without the great support we get from Toyota.” 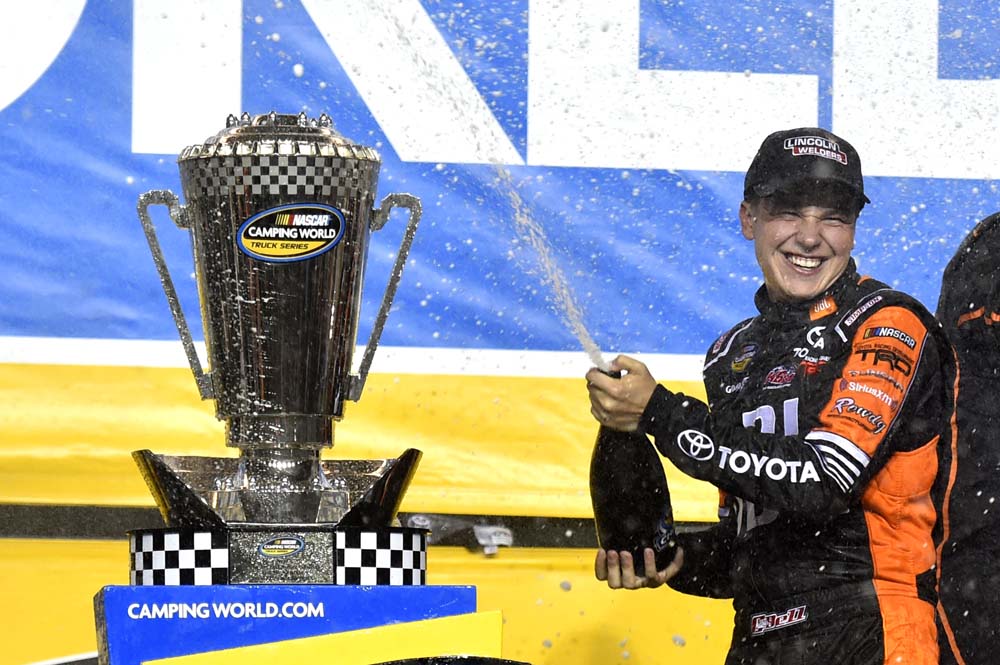