Christian Eckes Wins Pole at Las Vegas Motor Speedway and Picks Up Third Top-3 in a Row for No. 51 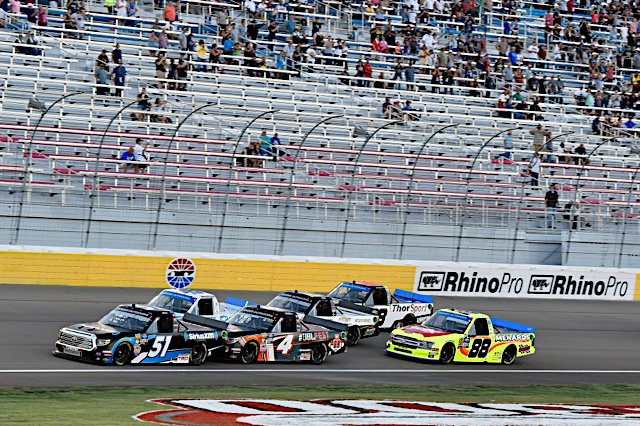 Christian Eckes added to his already impressive list of accomplishments with his second pole and second top-five finish in just 10 NASCAR Gander Outdoors Truck Series starts in the World of Westgate 200 at Las Vegas (Nev.) Motor Speedway. On Friday morning, Eckes was ninth-fastest in the single, two-hour Gander Trucks practice. In the afternoon, Eckes blasted a lap of 30.324 seconds, 178.077 mph to earn his second pole position in 10 series’ starts and fourth pole in a row at Las Vegas Motor Speedway for Kyle Busch Motorsports.

At the start of the race, Eckes jumped out front for three laps, but then dropped back on the first restart on lap 14. The young driver finished the first stage in 11th. He was able to climb back into the top-10 in the second stage, finishing in sixth. In the final stage, Eckes worked his way into the top-five and remained there, finishing third, his second top-five in six starts in 2019.

“It went pretty well. There were some mistakes here-and-there that cost us a shot at better track position. Lots to be learned. We had a pretty fast Tundra overall. Now we can move on to Martinsville and Homestead with a little momentum with a pole and a third. Overall, a good night, but definitely something to improve on.”

Todd Gilliland, driver of the No. 4 Toyota Tundra, finished fifth

Harrison Burton, driver of the No. 18 Toyota Tundra, finished ninth

The No. 51 team leaves the 19th race of the season ranked fourth in the NASCAR Gander Outdoors Truck Series Owner’s Playoff Standings. The No. 51 has earned six wins, 12 top-five finishes and 14 top-10 finishes in 2019, recording an average starting position of 8.5 and an average finish of 6.6.

Riley Herbst is scheduled to pilot the No. 51 Tundra at Talladega Superspeedway when the Gander Trucks Series returns on Saturday, Oct. 12. Live coverage of the event begins at 1:30 p.m. EST on FS1.