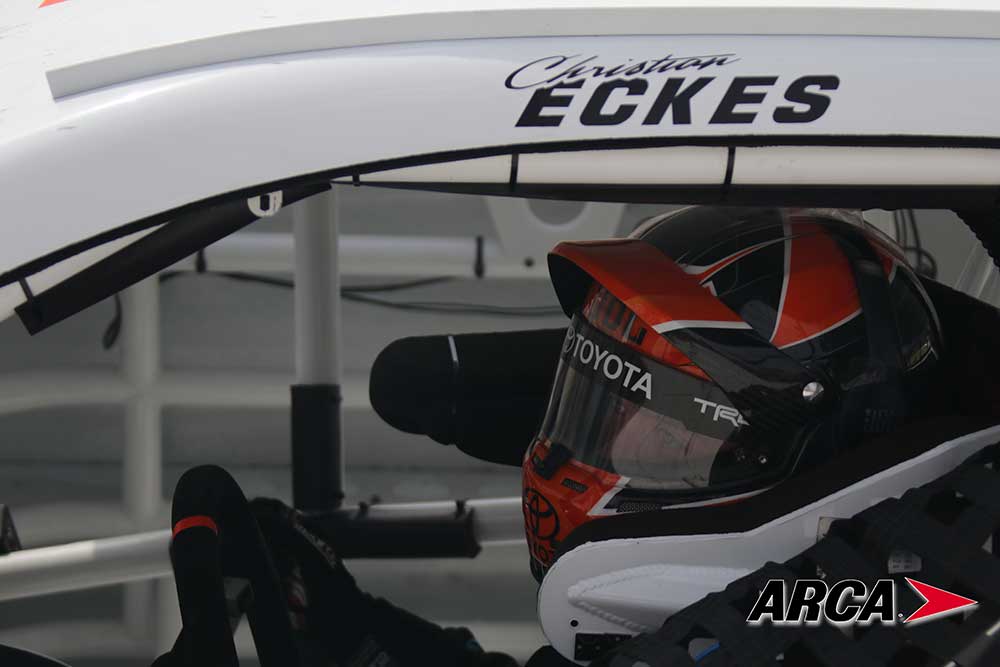 MOORESVILLE, N.C. (April 26, 2018) – Kyle Busch Motorsports (KBM) announced today that Christian Eckes, the most recent winner in the ARCA Racing Series, will make his NASCAR Camping World Truck Series (NCWTS) debut June 16 at Iowa Speedway in Newton as part of a four-race schedule driving a fourth entry for the organization.

Mobil 1™ – the world’s leading synthetic motor oil brand- will be the primary sponsor when the 17-year-old driver makes his Truck Series debut at Iowa and will also adorn the hood of his No. 46 Tundra at Gateway Motorsports Park in Madison, Ill., June 23 and ISM Raceway in Avondale, Ariz., Nov. 9. Eckes’ sponsor for his race at Martinsville (Va.) Speedway Oct. 27 will be named at a later date.

“The opportunity to compete for Kyle Busch Motorsports in my NASCAR Camping World Truck Series debut is a dream come true — my first chance to get behind the wheel of the No. 46 Tundra can’t get here soon enough,” Eckes said. “I can’t thank everybody at Toyota Racing, Mobil 1 and all of my supporters enough for making this possible.”

The Middletown, N.Y., native put his name on the motorsports map when he won the prestigious Snowball Derby Super Late Model race at Five Flags Speedway in Pensacola, Fla., in December of 2016. The then 15-year-old battled side-by-side with John Hunter Nemechek for the final two laps before narrowly edging him to the finish line. The Snowball Derby win was part of a three-race winning streak in Late Models to close out the 2016 season after the teenager was victorious in the Myrtle Beach 400 Late Model Stock event at Myrtle Beach (S.C.) Speedway and the Thanksgiving Classic All-Star Super Late Model race at Southern National Motorsports Park in Kenly, N.C.

Cody Glick, who oversees KBM’s Super Late Model program, will serve as Eckes’ crew chief for his four NCWTS races. Glick picked up his first career Truck Series victory when he called the shots for Kyle Busch’s win from the pole at Bristol (Tenn.) Motor Speedway last year. All together in four races atop the pit box in 2017, two with Busch and two with Todd Gilliland, the No. 46 team earned one win, one pole, 109 laps led, two top-five and three top-10 finishes across four starts under the Pennsylvania native’s guidance.

The world’s leading synthetic motor oil brand, Mobil 1 features anti-wear technology that provides performance beyond our conventional motor oils. This technology allows Mobil 1 to meet or exceed the toughest standards of car builders and to provide exceptional protection against engine wear, under normal or even some of the most extreme conditions. Mobil 1 flows quickly in extreme temperatures to protect critical engine parts and is designed to maximize engine performance and help extend engine life.
For more information, visit mobiloil.com, on Instagram @Mobil1, Twitter @Mobil1 and, on Facebook, www.facebook.com/mobil1.

Since debuting in 2010, Kyle Busch Motorsports (KBM) has quickly established itself as one of the most successful teams in all of NASCAR. Owned by 2015 Cup Series champion Kyle Busch and fueled by his passion for winning, the organization holds the Camping World Truck Series records for most career wins (66) and most wins in a single season (14 in 2014). In addition to collecting a series-record six Owner’s Championships, the organization has produced two championship-winning drivers; Erik Jones (2015) and Christopher Bell (2017).
KBM prepares a fleet of race-winning Toyotas out of its state-of-the art 77,000-square-foot facility in Mooresville, N.C. Fans can stay up-to-date with all the latest KBM news online at www.KyleBuschMotorsports.com, by liking the team on Facebook (KBMteam) and by following the team on Instagram (KBMteam), Snapchat (KBMteam) and Twitter (@KBMteam).