Christian Eckes to Drive the No. 18 Safelite® AutoGlass Tundra in 2020 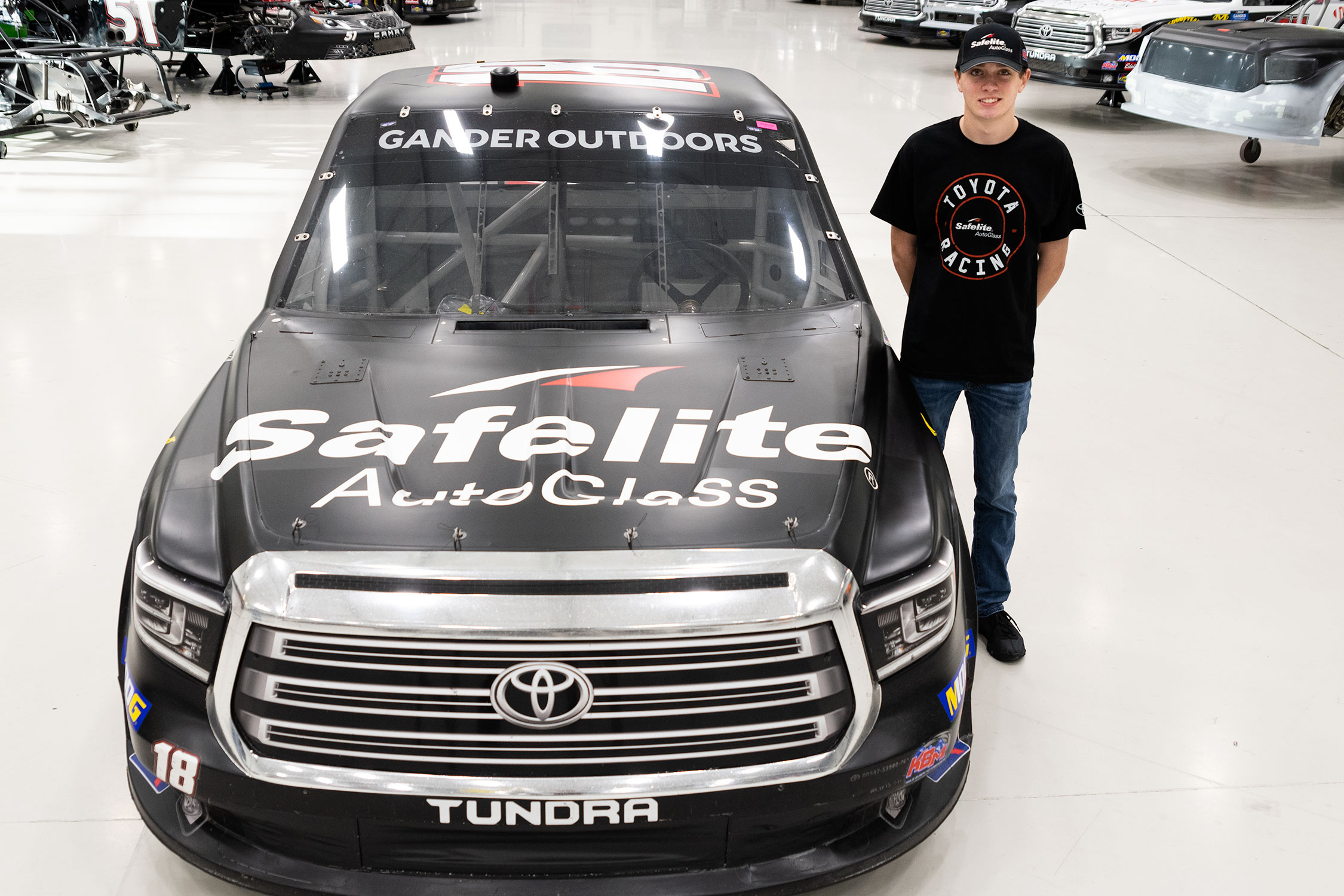 Kyle Busch Motorsports (KBM) is pleased to announce that 19-year-old ARCA Menards Racing Series champion Christian Eckes will compete full-time in the NASCAR Gander Outdoors Truck Series in 2020 driving the No. 18 Safelite® AutoGlass Toyota Tundra. Safelite, the nation’s largest provider of vehicle glass repair and replacement services, returns to KBM for a third season and will adorn the hood of Eckes’ Tundra for all 23 races of his rookie effort.

The talented teenager will be looking to deliver KBM a seventh NASCAR Gander Outdoors Truck Series owner’s championship at Homestead-Miami Speedway Friday night, as he makes his eighth start of the 2019 season behind the wheel of the No. 51 Mobil 1 Tundra. The New York native has produced three poles, 64 laps led, two top-five and three top-10 finishes across seven starts in his second partial schedule for the organization. In 2018, he produced three top-10 finishes across his four Gander Trucks starts.

Eckes captured the ARCA Menards Series championship this season after recording four wins, two poles, 400 laps led, 13 top-five and 17 top-10 finishes resulting in an average finish of 4.8 across 19 starts. He missed one start early in the season due to illness. Overall in 46 career ARCA starts since 2016, Eckes has posted seven wins, four poles, 1094 laps led, 23 top-five and 17 top-10 finishes with an average starting spot of 5.3 and average finishing position of 6.9.

“Returning to KBM to compete full-time for a NASCAR Gander Outdoors Truck Series championship with the support of Safelite AutoGlass and Toyota is an opportunity that I’ve worked my whole life for and I’m ready to take advantage of it,” Eckes said. “Being around the Truck Series the last few seasons, I’ve been able to see firsthand how much effort Safelite puts into their racing program and I’m excited to represent them not only on the track, but in the communities that we race in.”

“Christian has won races and a championship in the ARCA Series and we feel like he’s capable of doing the same driving for us full-time in the Truck Series next year,” owner Kyle Busch said. “He’s shown speed while running a part-time schedule for us the past couple of seasons — he’s won poles, led laps and been in a position to win a few races. We feel like it’s just a matter of time before he puts everything together and starts winning at this level.”

We’re excited to continue our partnership with Safelite — the outpouring of support that they provide our organization is second to none in the Gander Outdoors Truck Series. The number of associates and guests on hand each week cheering on our team is amazing and they also do great job of getting our drivers involved with charitable initiatives in the community.”

“We’re very excited to welcome Christian to the Safelite family,” said Safelite AutoGlass Senior Vice President Garth Beck. “We know he is a championship-caliber driver with many strong races under his belt. His ARCA Menards Series championship win this year, along with his impressive progress in the 2019 NASCAR Truck Series, proves he is a great fit to drive the Safelite Toyota Tundra for the 2020 season. We are very much looking forward to cheering him on to victory next year.”

“We are excited to see Christian full-time in the NASCAR Truck Series next season,” said Jack Irving, Senior Manager, Commercial Director, Toyota Racing Development. “It has been thrilling to watch the growth of Christian behind the wheel these past couple of seasons. With his success in the ARCA Menards Series this past year, this is the next logical move for Christian’s continued development towards what we hope is a long career in NASCAR with Toyota.”

An announcement on Eckes’ crew chief is forthcoming.

Safelite AutoGlass is a member of the Safelite® Group family of brands, which together make a difference in the lives of 10 million customers annually. This leading service organization, founded in 1947, is reaching record growth thanks to its People Powered, Customer Driven strategy. The Columbus, Ohio-based company employs 15,000 people across the United States.

Since debuting in 2010, Kyle Busch Motorsports (KBM) has quickly established itself as one of the most successful teams in all of NASCAR. Owned by 2015 Cup Series champion Kyle Busch and fueled by his passion for winning, the organization holds the Gander Outdoors Truck Series records for most career wins (75) and most wins in a single season (14 in 2014). In addition to collecting a series-record six Owner’s Championships, the organization has produced two championship-winning drivers; Erik Jones (2015) and Christopher Bell (2017).