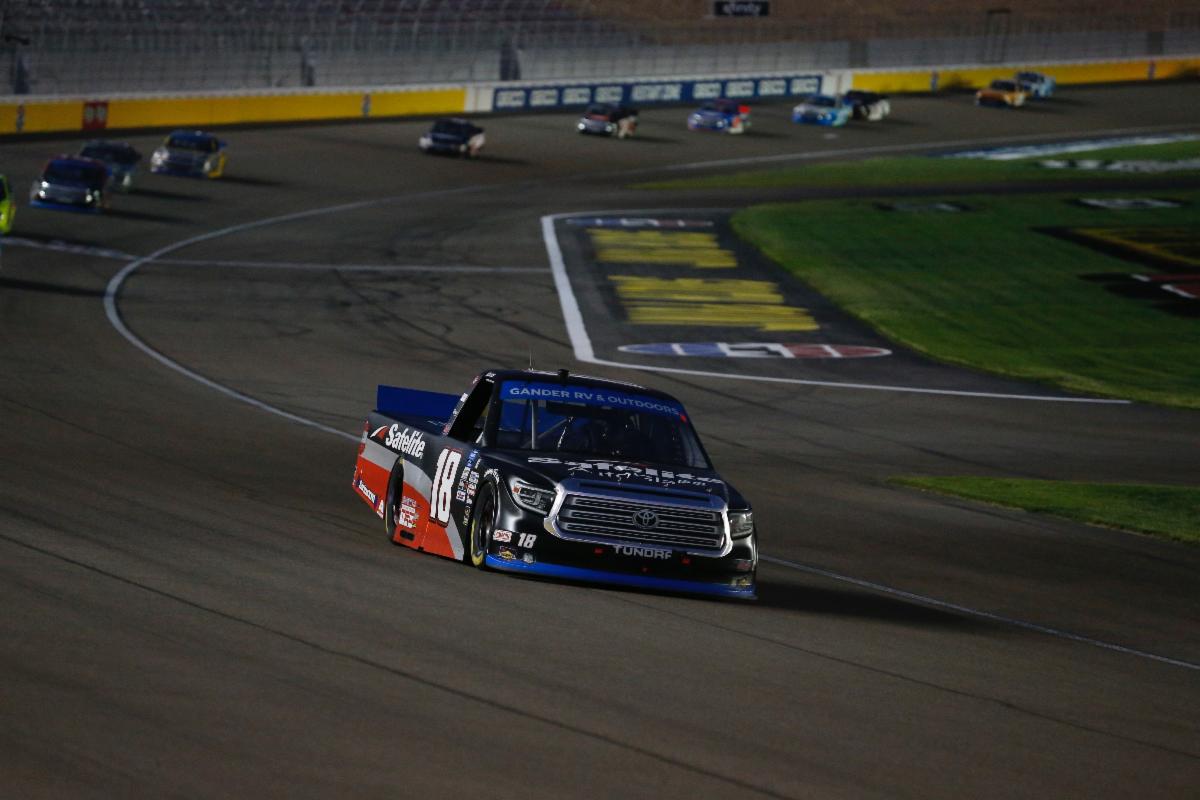 Christian Eckes and the No. 18 Safelite Tundra team had a solid outing, earning points in both stages and ending the night with an eighth-place finish in Friday night’s World of Westgate 200 at Las Vegas Motor Speedway.

The effort allowed Eckes to move up to the eighth position on the NASCAR Gander RV & Outdoors Truck Series playoff grid. The 19-year-old rookie currently sits six points ahead of Ben Rhodes in the battle for the final spot in the Round of 8 with one race remaining in the Round of 10.

You scored stage points in both stages and had a solid top-10 run. How was your truck tonight at Las Vegas?

“We did a good job getting stage points and putting together a decent finish compared to the last few races. We still struggled overall. We weren’t where we needed to be to really get up there and contend. We just lacked grip overall. I could run up there and contend for the lead for a couple laps and then the grip loss would just take over. Overall, it was a decent day for this Safelite Toyota team. I kind of screwed myself when I sucked the 2 (Sheldon Creed) back on that last restart, but overall, we moved forward on restarts and had a decent day.”

Six points above the Playoff cutline heading into Talladega. What is your focus there?

“It’s just going to be going for maximum points. You really can’t go for the win when you are in the Playoffs, so a lot of the guys below the cut line are going to go straight for it, so we need to get as many points as we can and see how the situation goes. In the same aspect, we need to be cautious and like I said, just see what happens. There are a lot of unknowns with Talladega, and we just have to do our best job to get some points and move on to the next round.”

Eckes moved up one position on the Gander Trucks Playoff grid after the second race of the Round of 10. He sits six points ahead of the cutoff line for advancing to the Round of 8. The bottom two drivers will be eliminated after the third and final event of the Round of 10 next week at Talladega (Ala.) Superspeedway on Oct. 3.

Eckes will be back behind the wheel of the No. 18 Safelite Tundra when the NASCAR Gander RV & Outdoors Truck Series resumes action on Saturday Oct. 3 at Talladega. Live coverage of the Talladega 250 will be on FS1, Motor Racing Network and SiriusXM at 1 p.m. ET.