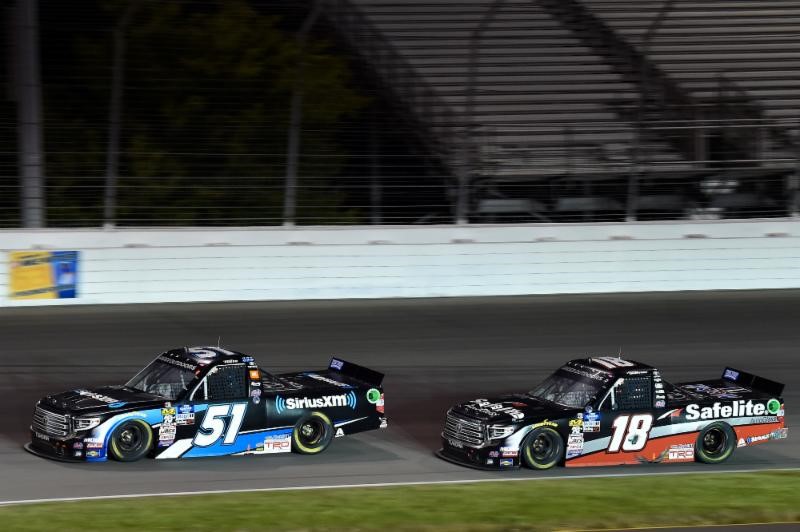 Christian Eckes made his second NASCAR Gander Outdoors Truck Series start of the season and sixth career series’ start at World Wide Technology Raceway at Gateway, and contended for the win before being taken out on the final lap and consigned to a 14th place finish. First practice and qualifying were washed out on Saturday, but Eckes posted the third fastest lap in final practice on Saturday afternoon. As per the NASCAR Rule Book, the field was set by owners’ points, so Eckes began the 160-lap event from the pole.

Just moments after finishing second in the ARCA Racing Series race just prior to the Gander Trucks event, Eckes led the field to the green flag. Eckes dropped back to the third position, but he took the lead in the final stage and led twice for a total of 57 laps. Crew chief Rudy Fugle opted for a two-tire strategy throughout the night, putting the young driver near the front of the field on the final lap. In a fierce battle for the win, the No. 52 machine made contact with the SiriusXM Tundra, sending Eckes spinning and relegating him to a 14th-place finish.

What happened on the last lap to take you out of contention?

“I made a mistake down in (turns) three and four and we lost some track position there. The 4 (Todd Gilliland) got by me and I was looking to make a crossover move and I’m not really sure what happened. Man, it’s unfortunate. These SiriusXM guys work too hard for this. I got a few more and I’m really looking forward to getting back with Rudy (Fugle, crew chief). We had a great run tonight. I honestly felt like we had the best Tundra there at the end. I just need to work on myself a little bit as far as the aero aspect of it. We’ll do that and move on to Pocono.”

Todd Gilliland, driver of the No. 4 Toyota Tundra, finished second

Harrison Burton, driver of the No. 18 Toyota Tundra, finished 16th

Chandler Smith, driver of the No. 46 Toyota Tundra, finished fourth

The No. 51 team leaves the 11th race of the season ranked first in the Truck Series Owner’s Championship Standings, three markers ahead of second place.

Brandon Jones is scheduled to pilot the No. 51 next week at Chicagoland Speedway in Joliet, Ill., on Friday, June 28. Live coverage of the Camping World 225 begins at 9 p.m. EST on FS1.