Christian Eckes Finishes 17th at Martinsville in the SiriusXM Tundra 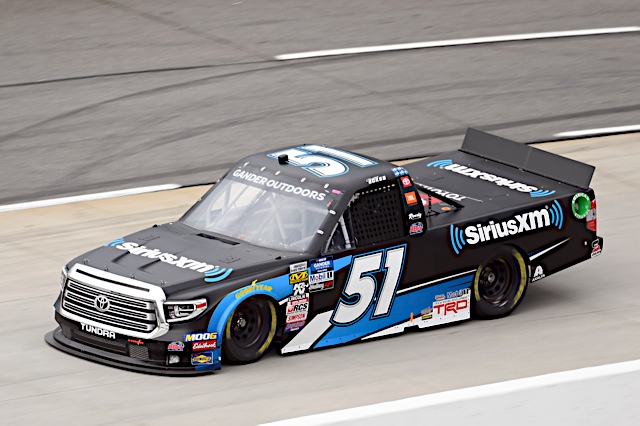 Christian Eckes finished 17th at Martinsville Speedway on Saturday, after earning his third-career pole and battling for the lead late in the race. On Friday, Eckes was fastest in first practice and 19th-fastest in the final Gander Trucks practice session. On Saturday morning in one round of single vehicle qualifying, the No. 51 SiriusXM team earned the pole with a lap of 19.944 seconds and 95.424 mph.

Eckes spent most of the day in the top-10, and was battling for the lead amidst several late-race restarts, when he was roughed up and shuffled back in the pack. As he was making his way forward again, he was caught up in a wreck in the final laps, ultimately finishing 17th.

Talk about your day.

“Today was an up and down day. It was great to get our SiriusXM Tundra on the pole and we were able to run near the front, but the last few restarts we just got killed. I’ve still got one start this year with these 51 guys at Homestead, and I hope we can make the most of it and end up in Victory Lane.”

Todd Gilliland, driver of the No. 4 Toyota Tundra, finished first

Harrison Burton, driver of the No. 18 Toyota Tundra, finished 18th

The No. 51 team leaves the 21st race of the season ranked third in the NASCAR Gander Outdoors Truck Series Owner’s Playoff Standings. The No. 51 has earned six wins, 13 top-five finishes and 15 top-10 finishes in 2019, recording an average starting position of 8.0 and an average finish of 6.9.

Brandon Jones is scheduled to pilot the No. 51 Tundra at ISM Raceway in Phoenix, Ariz. when the Gander Trucks Series returns on Friday, Nov. 8. Live coverage of the event begins at 8 p.m. EST on FS1.