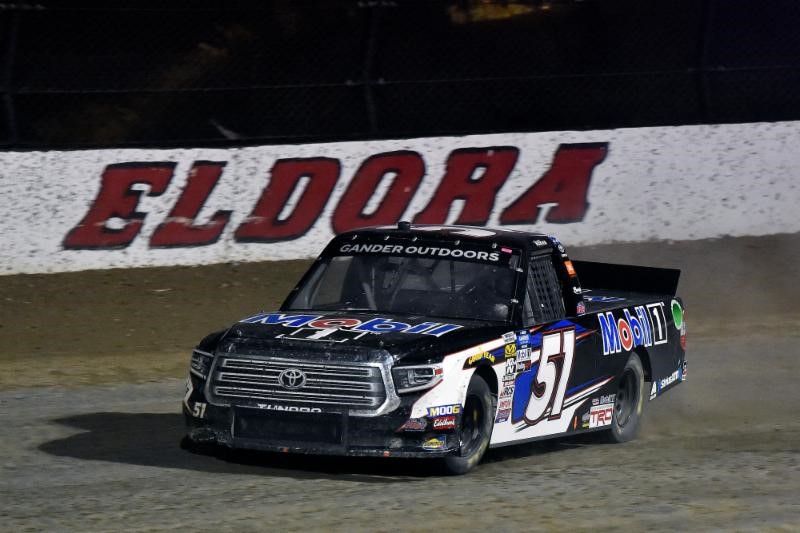 Christian Eckes continued to impress with his first foray on the half-mile clay oval of Eldora Speedway, earning a top-10 with a sixth-place finish in Thursday night’s Eldora Dirt Derby. On Wednesday evening, Eckes posted the 12th-fastest time in first practice and the 13th-fastest time in second practice for the NASCAR Gander Outdoors Truck Series. In the second of five qualifying races on Thursday afternoon, Eckes finished fourth, earning the 17th starting position.

In the only dirt race of the season for the Gander Trucks Series, the green flag flew on Thursday night for 150-laps around the half-mile facility. Eckes took the flag in 17th, but slowly and steadily made his way through the plethora of caution periods, eventually climbing into the top-10 in the final stage and surviving several late-race cautions to earn his fifth career top-10 Gander Trucks finish in eight starts.

Christian Eckes, driver of the No. 51 Mobile 1 Tundra for Kyle Busch Motorsports:

Talk about your first experience at Eldora in the dirt.

“It was fun. Throughout the race, it took me a little bit to get used to it, but once I did, we found some good speed. Our No. 51 Mobil 1 Tundra was really fast. I was driving pissed off at the end. We had a good top-10 finish. It was nice to come back as well as we did and score a top-10. I spun out myself once, and got spun out once, and we were still able to come back and finish sixth. Lots to be learned and we will move on to Michigan.”

Todd Gilliland, driver of the No. 4 Toyota Tundra, finished fifth

The No. 51 team leaves the 15th race of the season tied for first in the Truck Series Owner’s Championship Standings with the No. 98.

Christian Eckes will return to the No. 51 Tundra next week at Michigan International Speedway, on Saturday, August 10. Live coverage of the Corrigan Oil 200 begins at 1:00 p.m. EST on FS1.