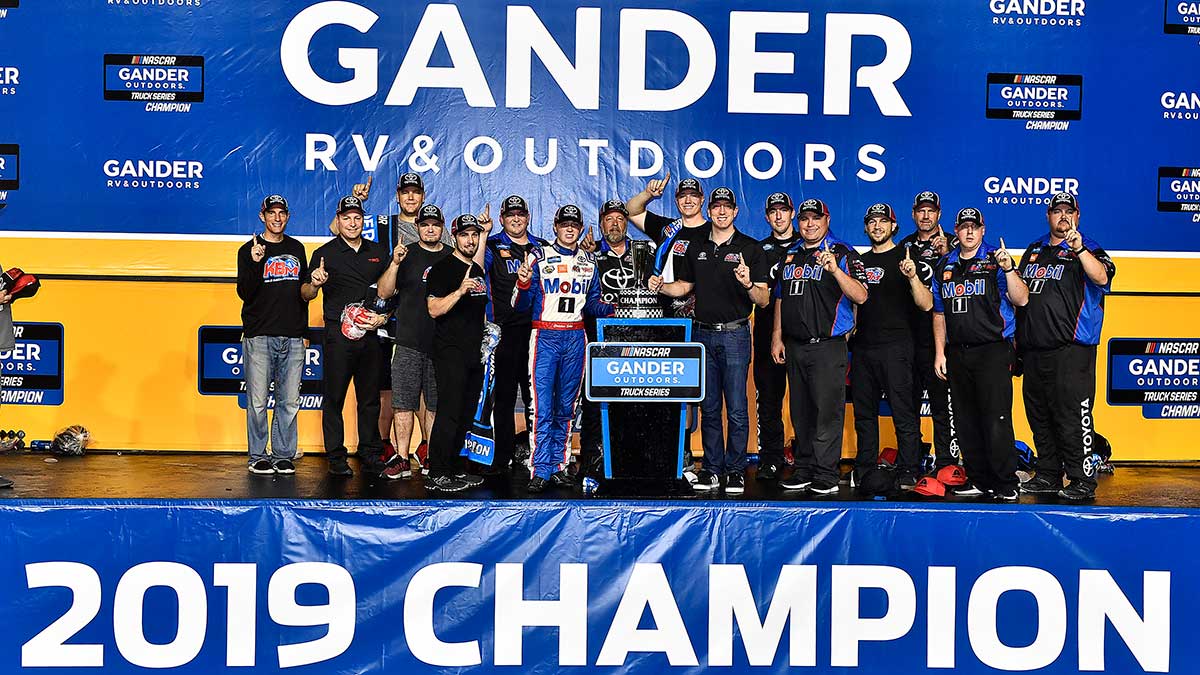 After rain delayed the NASCAR Gander Outdoors Truck Series finale at Homestead-Miami Speedway into the late evening hours, Christian Eckes posted a third-place finish to clinch the owner championship for Kyle Busch Motorsports’ No. 51. Over the course of the 2019 season, the No. 51 had seven different drivers, including owner-driver Kyle Busch, veteran Greg Biffle, Eckes, Brandon Jones, Chandler Smith, Alex Tagliani and Riley Herbst. These drivers, led by veteran crew chief Rudy Fugle, combined for six wins, three poles, 15 top-five and 17 top-10 finishes, 792 laps led, an average starting position of 7.7 and an average finish of 6.5. The No. 51 finished first or second 10 times in 23 races, and in the top-three 13 times. This is the record seventh owner’s title for Kyle Busch Motorsports, with the previous championships coming in 2010, 2013, 2014, 2015, 2016 and 2017.

In practice early Friday morning, Eckes was 14th-fastest in first practice and third-fastest in the final Gander Trucks practice session in the No. 51 Mobil 1 Tundra. Qualifying was rained out and the field was set by the rule book, so the No. 51 started on the front row in second-place.

On the start, the 19-year-old driver was battling a free handling condition, and fell backwards, but Fugle took advantage of pit strategy to adjust on the No. 51 and get Eckes back to the front of the field. The young driver led 26 laps to begin the final stage, then after a final green-flag pit stop, cycled around to third, where he finished the race.

Eckes, a Middletown, N.Y., native, will run full-time for Kyle Busch Motorsports in 2020, in the No. 18 Safelite AutoGlass Tundra. In eight starts in 2019, he posted three-top five finishes, four top-10 finishes and three poles. He had an average finish of 10.5 and an average starting position of 4.8.

Christian Eckes, driver of the No. 51 Mobil 1 Tundra for Kyle Busch Motorsports:

You locked up the owner’s championship for Kyle Busch with a third-place finish. Talk about your run.

“I struggled for most of the race honestly. This place is really tough. It got a little better there out front. Rudy (Fugle, crew chief) made a great call. We were able to lead some laps and come home third. It’s awesome to get another championship for these guys. I’m just ready for 2020.”

Todd Gilliland, driver of the No. 4 Toyota Tundra, finished 8th

Harrison Burton, driver of the No. 18 Toyota Tundra, finished 13th

The NASCAR Gander Outdoors Truck Series will open the 2020 season at Daytona (Fla.) International Speedway on Feb. 14. Live coverage of the NextEra Energy 250 begins at 7:30 p.m. ET on FS1.