Christian Eckes and the No. 51 SiriusXM Team Battle Tire Issues to Finish 15th at Michigan 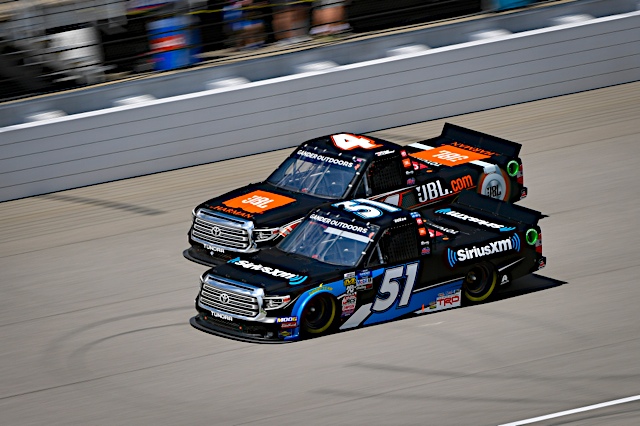 Christian Eckes persevered through a difficult day at Michigan International Speedway to earn a 15th-place finish in the Corrigan Oil 200. On Friday evening, Eckes posted the eighth-fastest time in first practice and the fastest time in second practice for the NASCAR Gander Outdoors Truck Series. During one round of single-truck qualifying, Eckes piloted his No. 51 SiriusXM Tundra to a front row starting spot.

The green flag for the 100-lap event flew on Saturday afternoon, and Eckes rolled off second. He fell back slightly, but maintained a top-five position. He finished the first stage in third, but spun halfway through the second stage. The team was able to make repairs, but continued to have tire problems, resulting in two more spins. Eckes salvaged a 15th-place finish after spinning on lap 96.

How did your day go?

“It was a tough day. We had a really fast SiriusXM Tundra. Even after we spun there in the beginning we were able to drive back through the field and make it to fifth or sixth before we started blowing tires. From there it just put us behind, and we were never able to recover. We had a super-fast Tundra, and you know, the tire deal kind of started off from me. There’s lots to be learned from this and I’m just looking forward to Las Vegas next with this team.”

Todd Gilliland, driver of the No. 4 Toyota Tundra, finished 24th

The No. 51 team leaves the 16th race of the season ranked fourth on the NASCAR Gander Outdoors Truck Series Owners Playoff Grid.

Chandler Smith will return to the No. 51 Tundra next week at Bristol Motor Speedway Speedway, on Thursday, August 15. Live coverage of the UNOH 200 presented by Ohio Logistics begins at 8:30 p.m. EST on FS1.