Chandler Smith to Compete in Eight Races in the No. 51 JBL Tundra 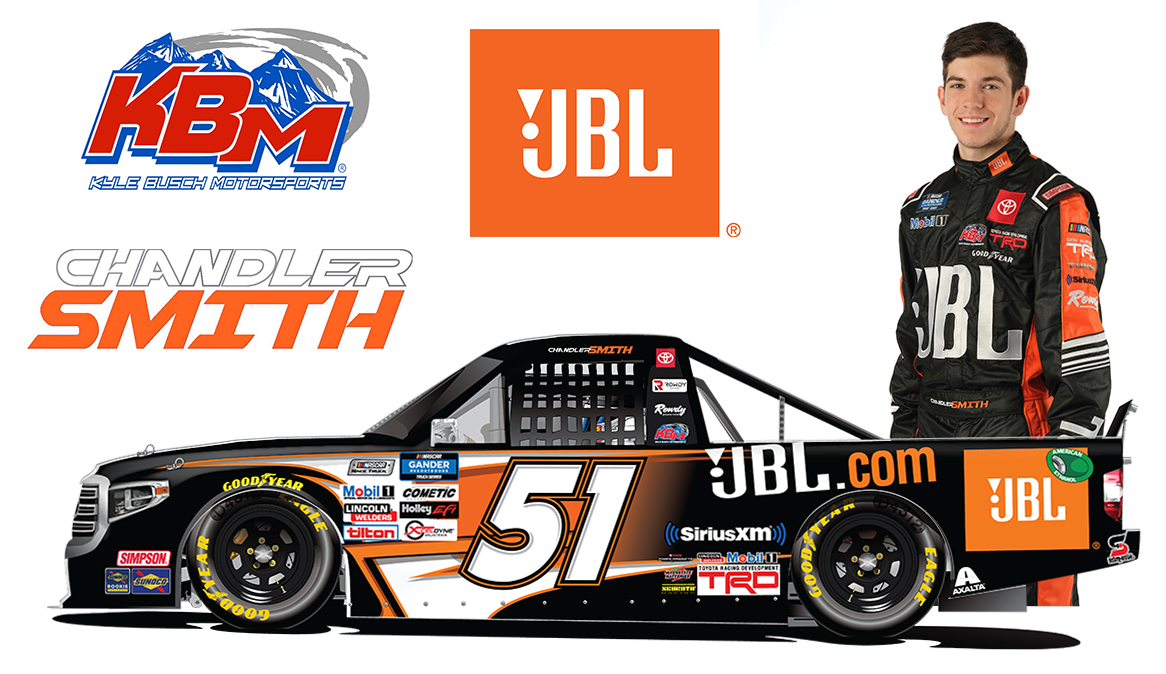 Kyle Busch Motorsports (KBM) announced today that Chandler Smith will return to the organization for an eight-race NASCAR Gander RV & Outdoors Truck Series schedule in 2020 with primary sponsorship from JBL, the authority in engineering superior sound. Smith will kickoff his 2020 schedule participating in the first two races of the Triple Truck Challenge, April 18 at Richmond (Va.) Raceway and May 1 at Dover (Del.) International Speedway.

In 2019, Smith recorded an impressive average finish of 4.2 across his four Gander Trucks starts, split between the No. 51 and No. 46 teams. Smith finished inside the top 10 in all four of his starts, led 56 laps and recorded three top-five finishes. His best result was a runner-up finish at Bristol (Tenn.) Motor Speedway. The racing prodigy also made five starts for KBM’s Super Late Model program last season, earning a runner-up finish in the All-American 400 at Fairgrounds Speedway in Nashville (Tenn.) and sixth-place finishes in the Winchester 400 at Winchester (Ind.) Speedway and the Snowball Derby at Five Flags Speedway.

In addition to his limited schedules at KBM in 2019, Smith was impressive in his second part-time ARCA Menards Racing Series schedule. The Georgia native collected five victories, four poles, 666 laps led, eight top-five and 10 top-10 finishes while competing in just 11 of the 20 events. His five victories in 2019 were a series high and despite being a part timer, he led the series in laps led for the second consecutive year. Overall in 20 starts the last two seasons, Smith has compiled seven wins, eight poles, 1429 laps led, 14 top-five and 19 top-10 finishes resulting in an average finish of 4.3.

“I learned a lot about racing in the NASCAR Gander RV & Outdoors Truck Series last season in my four races and I’m thankful to everyone at KBM, JBL, Toyota and TRD for the opportunity to have an expanded schedule this year,” Smith said. “Danny Stockman (crew chief) and all the guys on the No. 51 team are already off to a great start getting a win with Kyle (Busch) at Las Vegas and having a strong run with Riley (Herbst) at Daytona. I know they are going to provide me with fast JBL Tundras every week. If I do my job and we execute as a team, I’m confident that we’ll be able to rack up a few wins and put ourselves in position to bring home another owner’s championship for KBM.”

“Chandler is one of those young drivers that come along and are able to produce speed and run up front at every level as they progress up the ladder and it was no different for him last year in the Truck Series,” owner Kyle Busch said. “He was fastest in practice for his first truck race and went out and led a bunch of laps. Although he had just four races on his schedule, he was in the mix for the win a couple of times and we feel that his first of many wins at KBM is just around the corner.

“Much like some of the younger guys before him, Erik Jones and most recently Christian Eckes, we feel that the schedule he is running for his second year in trucks is a mix of different types of tracks and with a good portion of his races coming during the playoffs it will help to prepare him for running for rookie of the year and competing for a championship next season.”

Since debuting in 2010, Kyle Busch Motorsports (KBM) has quickly established itself as one of the most successful teams in all of NASCAR. Owned by two-time Cup Series champion Kyle Busch and fueled by his passion for winning, the organization holds the Gander RV & Outdoors Series records for most career wins (76) and most wins in a single season (14 in 2014). In addition to collecting a series-record seven Owner’s Championships, the organization has produced two championship-winning drivers; Erik Jones (2015) and Christopher Bell (2017).