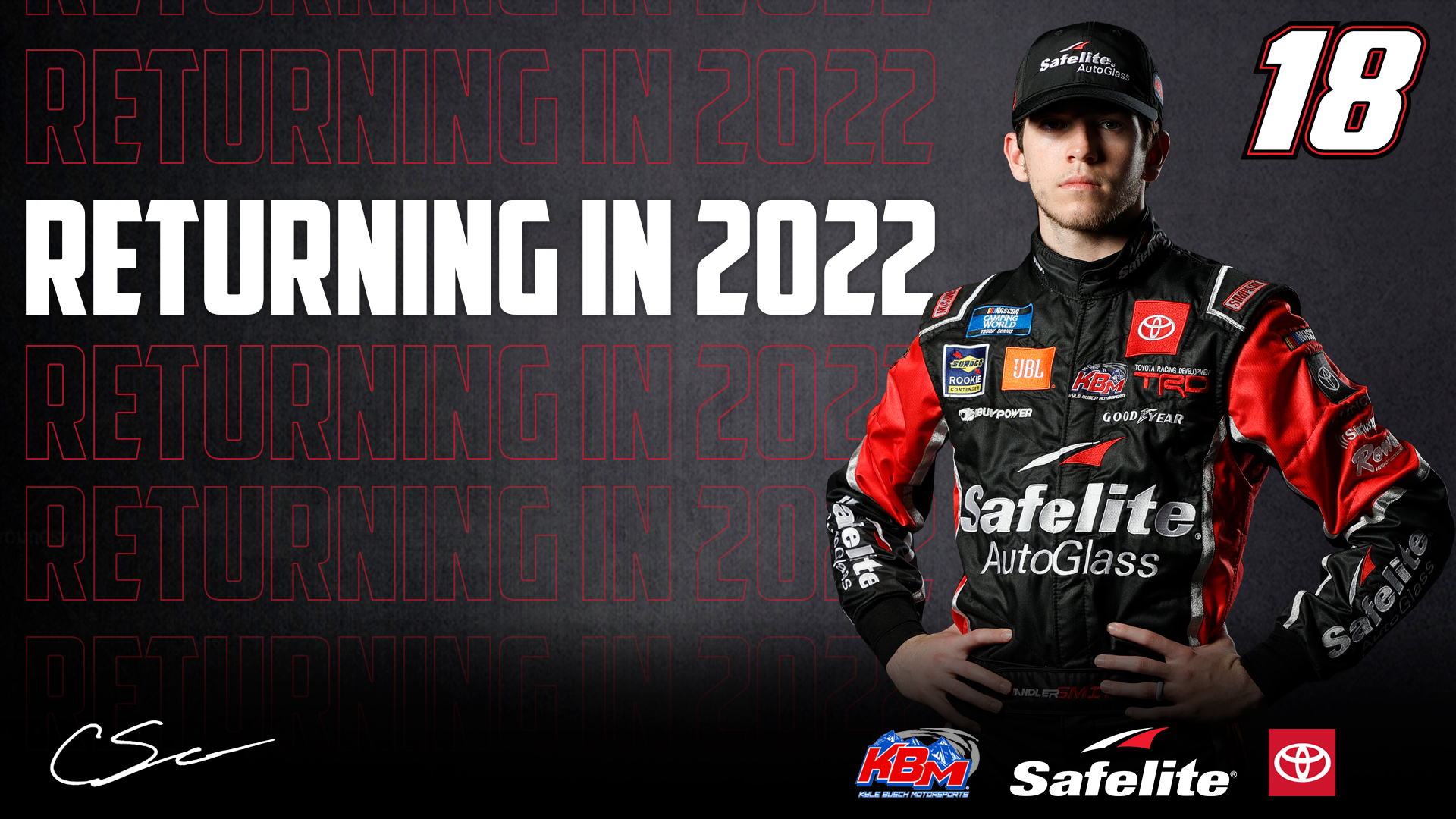 MOORESVILLE, N.C. (Nov. 30, 2021) – Kyle Busch Motorsports (KBM) announced today that Chandler Smith will return to drive the organization’s No. 18 Tundra in the NASCAR Camping World Truck Series full-time in 2022. Safelite AutoGlass, the nation’s largest provider of vehicle glass repair, replacement and recalibration services, returns to KBM for a fifth season and will be the primary sponsor on Smith’s Tundra for 15 races. Veteran crew chief Danny Stockman will once again be atop the pit box for the No. 18 team in 2022.

Smith earned NASCAR Camping World Truck Series Rookie of the Year honors in 2021 and finished eighth in the championship standings after producing two victories, one pole, 213 laps led, six top-five and nine top-10 finishes in his first full-time season. He earned his first career Truck Series victory at Bristol (Tenn.) Motor Speedway in September and in the series finale at Phoenix (Ariz.) Raceway earned his first career pole and swept all three stages en route to his second victory.

“I’m really excited to be back partnered with Safelite and KBM for a second full-time season and ready for another run at a NASCAR Camping World Truck Series championship,” Smith said. “Danny (Stockman, crew chief) and I built something over the course of the year and really hit our stride late in the season. We’re looking forward to carrying that momentum over to starting 2022 strong. I feel that having some form of practice and qualifying at all the races next season will be big for our No. 18 Safelite team.”

“Chandler finished the 2021 season strong by winning twice over the last five races and we’re confident that he and Danny (Stockman, crew chief) will be able to pick up right where they left off next year,” Busch said. “It was awesome for us to be able to get Safelite into victory lane and celebrate with them multiple times in 2021 as they really support their racing program. I know that everyone on the No. 18 Safelite team is working hard to ensure we continue winning and push to be one of the four teams competing for a championship at Phoenix.”

“Safelite is excited to have Chandler Smith back in the No. 18 Toyota Tundra for the 2022 Season,” said Safelite AutoGlass Senior Vice President Garth Beck. “We are proud of his accomplishments in 2021, with his two-win season and earning the Rookie of the Year award, and we are looking forward to 2022 and all that he will accomplish.”

Stockman’s drivers have produced six victories at KBM across his first two seasons, including two with Smith behind the wheel in 2021. The veteran crew chief captured a Truck Series championship with Austin Dillon in 2011 and also won an Xfinity Series championship with Dillon in 2013. Stockman has totaled 10 career Truck Series victories to go along with seven in the Xfinity Series.

Further sponsor announcements for the 2022 season are forthcoming.

With more than 7,900 MobileGlassShops™ and stores in all 50 states, Safelite AutoGlass® is the nation’s largest provider of vehicle glass repair, replacement and recalibration services. Last year, close to 7 million customers chose Safelite AutoGlass for its 24/7 national contact centers, advanced online scheduling, superior repair and replacement systems, and the industry’s only nationwide lifetime guarantee.

Safelite AutoGlass is a member of the Safelite® Group family of brands, which together make a difference in the lives of nearly eleven million customers annually. This leading service organization, founded in 1947, is reaching record growth thanks to its People Powered, Customer Driven strategy. The Columbus, Ohio-based company employs nearly 16,000 people across the United States.