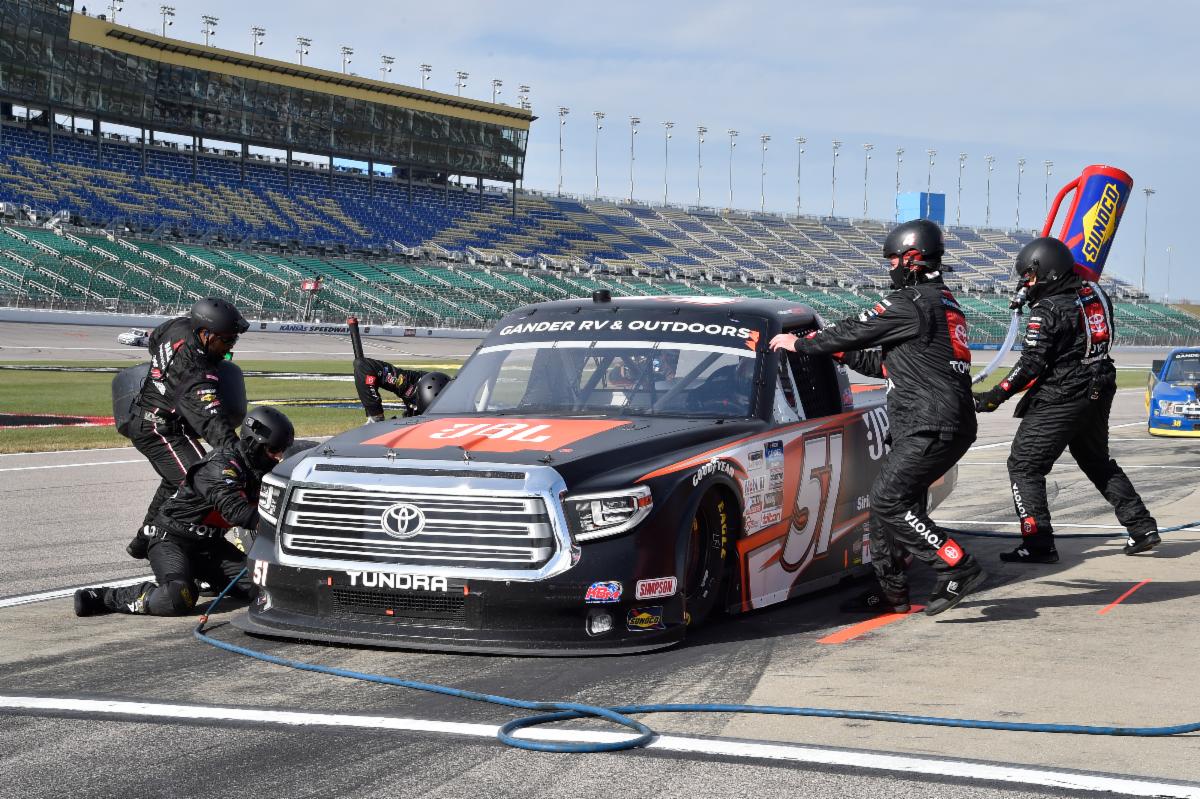 Chandler Smith rallied back to finish fifth and earn his fourth consecutive top-five finish in Saturday’s Clean Harbors 200 at Kansas Speedway. Smith started from the pole, finished Stage One in second and Stage Two third before a miscue on pit road slowed the momentum of the No. 51 JBL team.

The over-the-wall crew did not secure all the lug nuts on a four-tire stop before the Final Stage and crew chief Danny Stockman alertly called his young driver back to pit road to secure the loose lug nuts. Smith would restart the Final Stage from the inside of row nine but rallied back to the fourth position before making his final scheduled pit stop under green-flag conditions with just under 30 laps remaining.

Another slow stop left him ninth when stops cycled through with 20 laps remaining. Smith was scored in the seventh position when the top two-trucks tangled, and Zane Smith spun bringing out the final caution of the race. The JBL Tundra lined up on the bottom of the third row for NACAR overtime and after a strong restart moved up to third but battled a loose-handling Toyota in the closing laps and would cross the stripe fifth.

How did the final overtime play out for you?

“Overall, we had a really good No. 51 JBL Toyota Tundra. I got shuffled back there after we didn’t get the left-front tight enough and had to come from the rear all the way back to the front and got that caution at the very end that we needed. We ended up freeing up too much there at the very end of the race so that last restart obviously, we fired off really good, but I was too free to do anything with them, so I fell back two positions. Overall, it was a really solid day for the team and for the guys. Still making a run for the owner’s championship.”

Four straight top-five for you, Chandler. Did running the ARCA race help you today?

“Yeah, the ARCA race definitely helped, just having the feel of the surface of the track, and the grip level of it. Overall, the No. 51 JBL Toyota Tundra was really, really good today. We were the truck to beat, and I felt like everybody kind of knew that. There were just way too many hiccups on pit road. At the end, we freed it up too much. It just cooled down way, way too much and we didn’t adjust enough towards it. So, there under that last caution, I felt like if we were a little snugger, we would have at least finished second or so. The track freed up too much on us, but overall, we got a top-five. We are being consistent. Bigger picture.”

After one race in the Round of 8 in the owner’s playoffs, the No. 51 team moved up to positions to sixth. The reigning owner’s champions are 13 points behind the cutoff line for advancing to the Championship 4 with two races remaining in this round.

Smith will be back behind the wheel of the No. 51 JBL Tundra when the NASCAR Gander RV & Outdoors Truck Series resumes action on Saturday Oct. 25 at in Texas Motor Speedway in Ft Worth. Live coverage of the SpeedyCash.com 400 will be on FS1, Motor Racing Network and SiriusXM at noon ET.