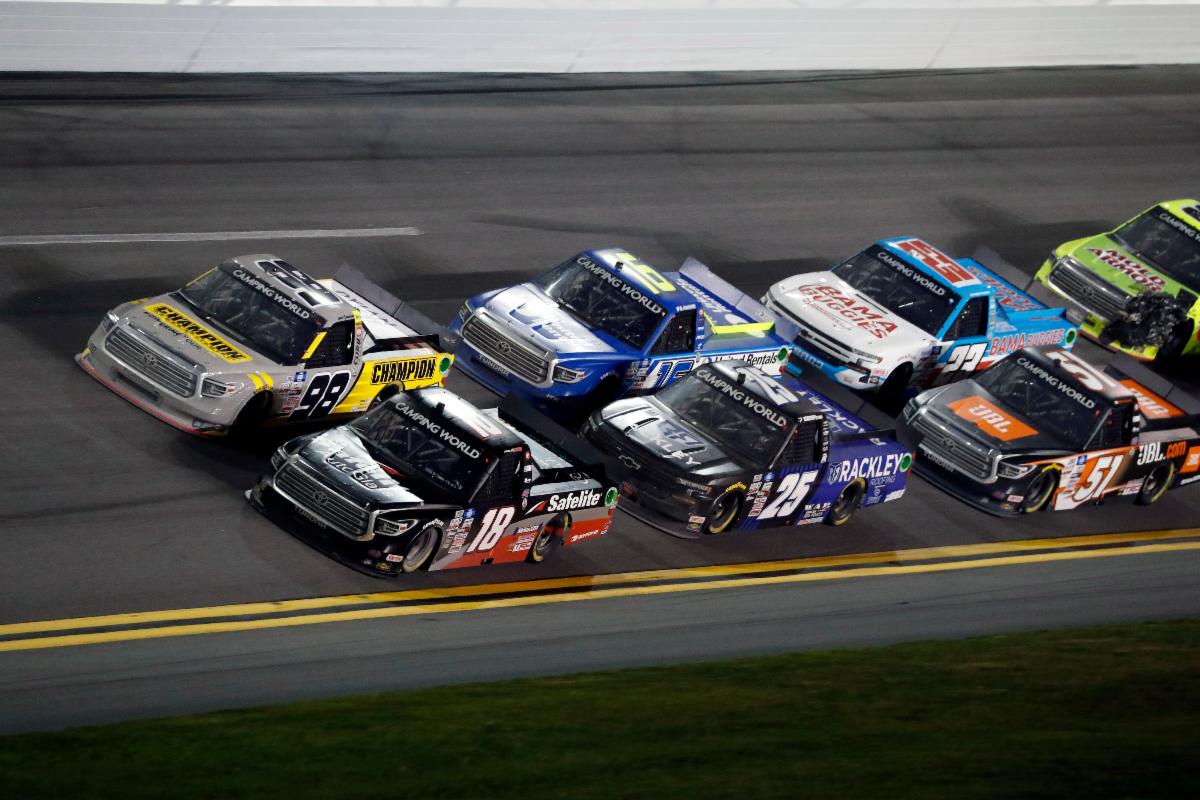 Chandler Smith had an impressive outing Friday night in his first start in any series at Daytona International Speedway as the NASCAR Camping World Truck Series kicked off the 2021 season. Smith started from the sixth position, finished inside the top 10 in all three stages and had the Safelite Tundra out front for a race-high 22 laps.

Smith was battling for the lead in the closing laps when he got loose, slid down the track and barely clipped the apron. As he corrected his path, he shot up the track and made contact with Grant Enfinger on the outside lane. The contact caused an issue with a tire and moments later the No. 18 Toyota ended up spinning out. Behind Smith, a melee ensued ending the night for several competitors and setting up an overtime finish.

After a trip down pit road to get four fresh tires and clear the fenders on his Safelite Tundra, Smith would start NASCAR overtime in the 20th position. The Georgia native was scored 19th when the field took the white flag, but as another incident occurred as the field exited Turn 4 causing several trucks to wash up the racetrack, he drove to the inside to avoid them and ended his night with a ninth-place result.

Chandler Smith, driver of the No. 18 Safelite AutoGlass Tundra for KBM

How would you rate your debut at Daytona?

“Yes and no. We came down here with a championship-caliber team, a championship-caliber truck capable of winning and we didn’t win the race and we were in position to. It was a rookie mistake by me. I should have known better with him sitting on my door like that, even on a speedway like this with how flat it gets off (turn) four, sooner or later that was what was going to happen, and it was going to lead to even worse disaster. We paid the price for it, but my Safelite Toyota guys got me back out there and we got rolling and we still salvaged a decent points day.”

Smith and the No. 18 Safelite team leave the first event of the Camping World Truck Series fourth in the championship standings, 14 points behind Rhodes.

Smith will be behind the wheel of the No. 18 JBL Tundra when the NASCAR Camping World Truck Series resumes action on Friday Feb. 19 at the Daytona International Speedway Road Course. Live coverage of the BrakeBest Brake Pads 159 At DAYTONA will be on FS1, Motor Racing Network and SiriusXM at 7:30 p.m. ET.