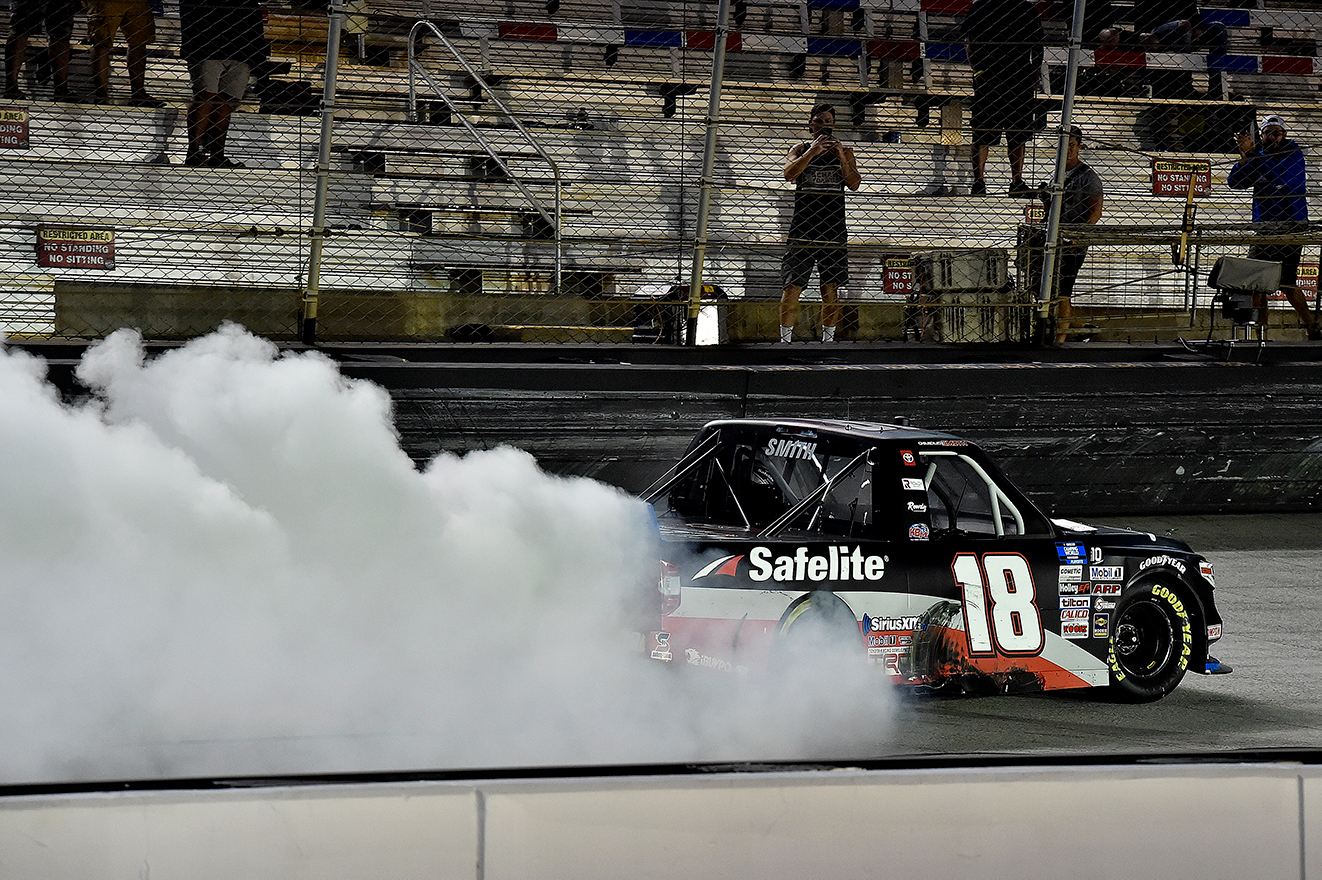 With lessons learned from a runner-up finish at Bristol in 2019 in just his third NASCAR Camping World Truck Series start, Chandler Smith muscled his way past reigning champion Shelden Creed on a restart with five laps remaining and then held off Kyle Busch Motorsports (KBM) teammate John Hunter Nemechek to collect his first career victory in his 34th career start in NASCAR’s third division. The Georgia native became the 17th different driver to collect their first Truck Series triumph for KBM.

The Safelite Tundra lined up for the restart on the inside of the front row seven points below the cutoff line for advancing to the Round of 8 of the playoffs, with the majority of his competitors inside the top 10, making it a must-win-situation. After racing side-by-side for over a lap with Creed, Creed got loose into Turn 3 opening the door for Smith. As Smith dove to the inside, both trucks washed up the track allowing Nemechek to slip past both momentarily. Of them. Nemechek got loose off Turn 4 allowing Smith to take back the lead. Nemechek tried to give Smith one more bump-and-run, but Smith was able to keep his Toyota settled and would go on to cross the stripe 0.422 seconds ahead of Grant Enfinger.

With the victory and the reset of points, Smith will enter next week’s race at Las Vegas (Nev.) Motor Speedway fifth on the playoff grid, three points behind the cutoff line for advancing to the Championship 4.

How do you feel getting your first career Truck Series victory?

“God is good, God is so damn good. I’ve really been tested here in the last year or two. Tested my faith and I’ve kept it. This is unbelievable. I can’t thank everyone behind me. Safelite, Toyota, KBM, Kyle Busch (team owner) – everybody, Jack Irving (TRD). This is incredible, I’m speechless right now.”

Were you starting to wonder if you would get a win in this series?

“I feel like truck racing is definitely the hardest out of all three series right now. In 2019, I felt like I was really, really good. Nothing’s changed about me, the competition has just gotten harder. Had to go to work and do a lot more. More studying and it finally paid off. God is just so good and I’m just so happy. This is unbelievable.”

What was going through your mind when you knew you had to win to transfer in the Playoffs?

“2019. That’s all I’ve been talking about all week is what I would do different in 2019 on that restart because of how damn hard these truck races are to win. It came down to it and I’ve been preparing myself all week for it. Just got a good launch. I can’t thank everybody enough that’s on this Safelite Toyota. This has been a heck of a journey and my faith has definitely been tested. Just keep on digging.”

How do you approach the next round of the Playoffs?

“I think everybody’s confidence is really high now for sure. I definitely think we’re going to be pretty good going into the next round.”

With the victory Smith advances to the Round of 8 of the Camping World Truck Series playoffs. With the points reset, the 19-year-old driver will enter next week’s race at Las Vegas (Nev.) Motor Speedway fifth on the playoff grid, three points behind the cutoff line for advancing to the Championship 4.

Smith will be back behind the wheel of the No. 18 Safelite AutoGlass Tundra when the NASCAR Camping World Truck Series resumes action Friday, Sept. 24 at Las Vegas (Nev.) Motor Speedway. Live coverage of the Victoria’s Voice Foundation 200 will be on FS1, Motor Racing Network and SiriusXM at 9 p.m. ET.