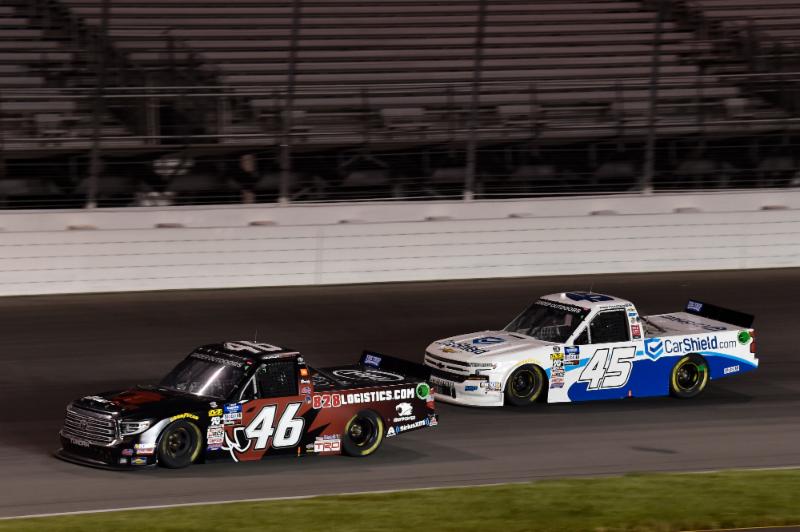 After qualifying was washed out on Saturday afternoon at World Wide Technology Raceway, Chandler Smith was left with the 25th-starting position based on the Owner’s points position of the No. 46 team, which runs a limited schedule. Smith would make his way into the top 10 for the majority of his second career NASCAR Gander Outdoors Truck Series start and finished in the fourth spot, four spots better than his debut a week ago at Iowa Speedway in Newton.

Chandler Smith, driver of the No. 46 iBUYPOWER/828 Logistics Tundra for Kyle Busch Motorsports:

“Overall a really good learning night. Hats off to the whole 46 crew. They definitely needed this performance. Got a top-five with a fourth-place finish for them, so hats off to Marcus (Richmond, crew chief) and all of the guys back at the shop. Thank you to iBUYPOWER\828 Logistics for all they’ve done for me to make this possible. It was an adventure, but it definitely paid off. I’m wore out, but it paid off and looks good on my resume. Racing last week helped a lot, driving through the field twice. That paid off a lot tonight and it obviously showed driving through the field, especially later in that run tonight.”

Smith will be back behind the wheel of the No. 51 iBUYPOWER Tundra for the NASCAR Gander Outdoors Truck Series race at Bristol (Tenn.) Motor Speedway Aug 15. Bristol will also be the No. 46 team’s next event, with Raphael Lessard behind the wheel.