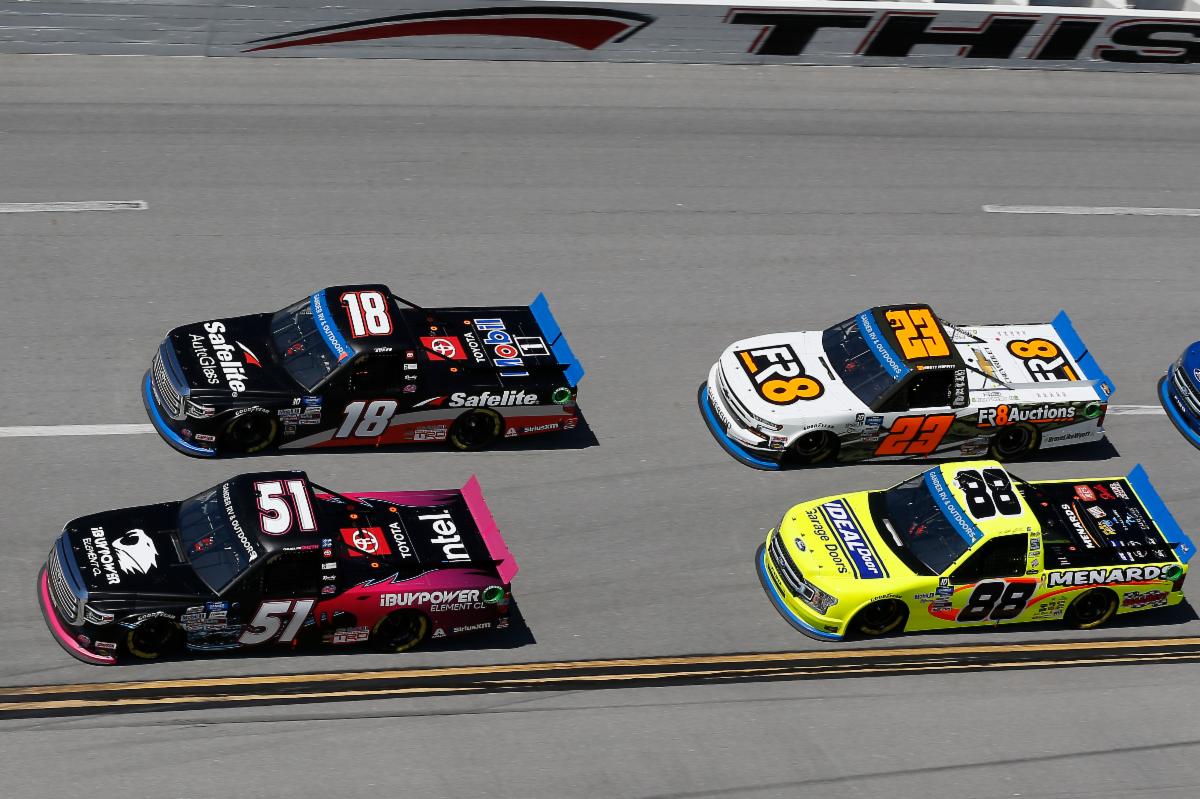 Making the first superspeedway start of his career, 18-year-old Chandler Smith brought the iBUYPOWER Tundra home in the third position at Talladega Saturday. Smith’s third consecutive top-five finish in the NASCAR Gander RV & Outdoors Truck Series catapulted the team from ninth to fourth in the owner’s point standings and earned the No. 51 team a spot in the Round of 8.

Chandler Smith, driver of the No. 51 iBUYPOWER Tundra for Kyle Busch Motorsports:

“It was a blast. This was my first ever superspeedway race or ever being on a superspeedway other than being at Michigan. I made two laps at Daytona in an ARCA car and other than that, I’ve never even done this, especially in a draft. It was a lot of fun. Hats off to all my iBuyPower Toyota guys from KBM. They gave me a heck of an iBuyPower Toyota Tundra today. Our biggest thing was that we wanted to advance into the Playoffs for the owner’s points and we did exactly that. I felt like we also had a truck to win the race there at the very end. We were really, really good. I’m happy for Raphaël (Lessard), he got his first ever win today so hats off to that whole 4 team. It was blast.”

Can you talk us through your run out there with very intense racing?

“Overall, it was a blast. This is my first superspeedway race. I’ve only been on Daytona for two laps in an ARCA car without any draft or anything. This was a lot different just jumping in, starting p5, was a lot of fun. Our biggest thing today was to get our truck out front and just get stage points for the first two stages so we could be locked in for the owner’s points, and we did just that and we got a good finish. Today was a great day. This 51 team, we haven’t been able to show it here lately, but we are really strong. We just have to put things together. Today, we put everything together pretty good, and if the caution wouldn’t have came out, I feel like we would have been in the spot to win the race. Hats off to the 4 (Raphaël Lessard) crew. They are going to be celebrating hard from that, but overall, my iBuyPower/JBL No. 51 Toyota Tundra team did very good. I’m really proud of those guys. We put everything together and we executed on pit road. That’s what we have to do every weekend.”

The No. 51 team finished the Round of 10 in the fourth position in the Gander RV & Outdoors Series playoffs and will advance to the Round of 8, which begins in two weeks at Kansas Speedway in Kansas City.

Smith will be back behind the wheel of the No. 51 JBL Tundra when the NASCAR Gander RV & Outdoors Truck Series resumes action on Saturday Oct. 17 at in Kansas Speedway. Live coverage of the Clean Harbors 200 will be on FOX, Motor Racing Network and SiriusXM at 4 p.m. ET.