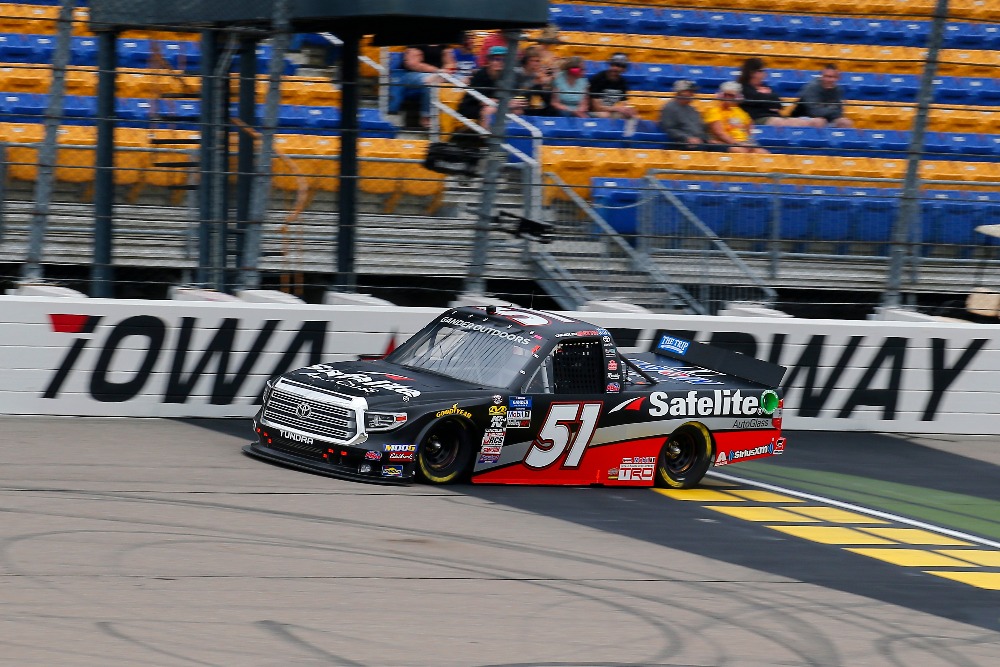 Sixteen-year-old Chandler Smith made his first NASCAR Gander Outdoors Truck Series start at Iowa Speedway, and earned a top-10 finish in the No. 51 Safelite AutoGlass Tundra. In the first practice session, Smith was the fastest, and in final practice he was 18th on the board. On Saturday afternoon, qualifying was washed out and the field was set per the rule book, giving the pole position to the No. 51. The weather did not subside, so the race was postponed to Sunday morning.

As the race began, Smith reported that he could not hear his team over the radio, and he led the first 55 laps with no communication, before pitting under caution for repairs. The long stop and a subsequent speeding penalty set the young driver back in traffic, but he was able to rebound for an eighth-place finish.

Chandler Smith, driver of the No. 51 Safelite AutoGlass Tundra for Kyle Busch Motorsports:

What happened with your radio early in the race?

“It goes from dominating stage 1 to coming down pit road and having a radio failure. We had to do some radio stuff on pit road and then we had to go from the rear back to the front. I sped down pit road and we came out second, so it was just an up and down day. Overall it was a good learning day. I think we’ll take it and go to Gateway.”

Was your Tundra good enough to win?

“We just over-adjusted the Safelite Tundra a little bit at the end. The rear end was completely swinging outwards from entry all the way to exit. I just couldn’t really maintain a good confident speed and keep the momentum up enough like I was the first segment.”

Todd Gilliland, driver of the No. 4 Toyota Tundra, finished 10th

Riley Herbst, driver of the No. 46 Toyota Tundra, finished 15th

The No. 51 team leaves the 10th race of the season ranked first in the Truck Series Owner’s Championship Standings, 18 markers ahead of second place.

Christian Eckes is scheduled to be behind the wheel of the No. 51 at World Wide Technology Raceway at Gateway, Saturday, June 22. Live coverage of the Gateway 200 begins at 10 p.m. EST on FS1.