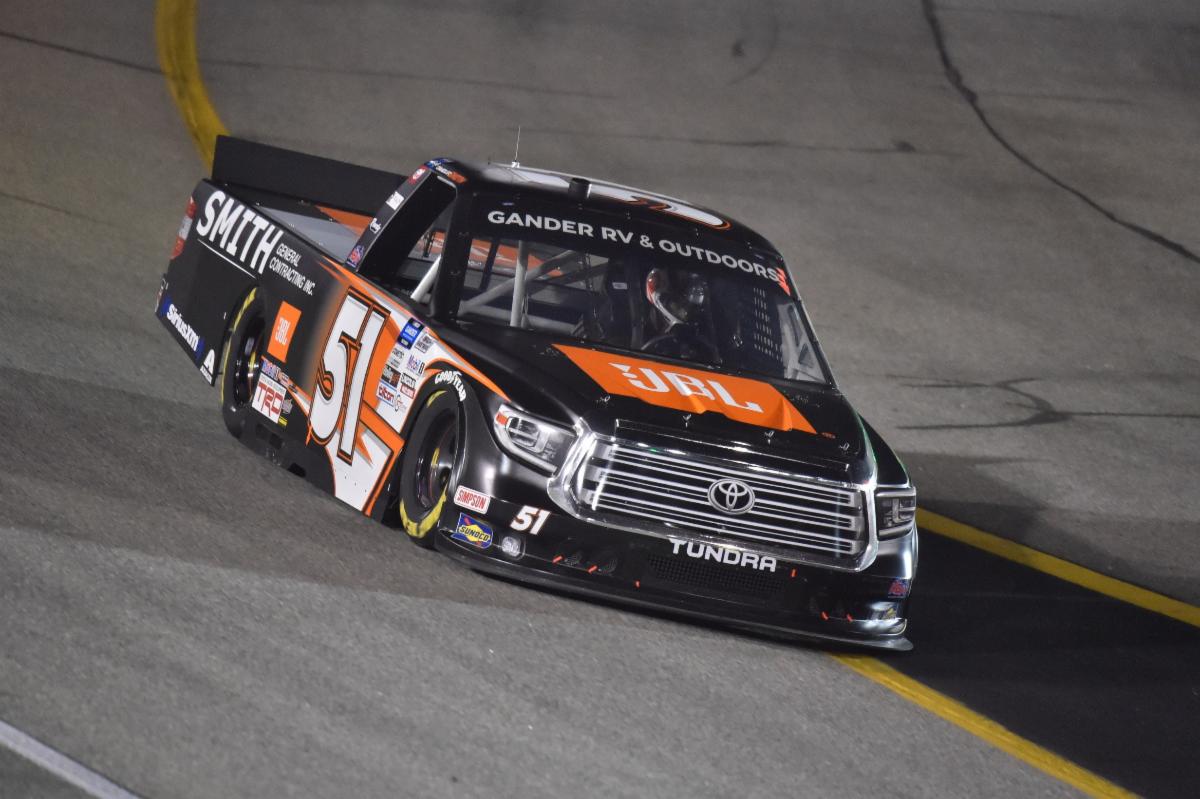 Chandler Smith secured the No. 51 team’s spot in the NASCAR Gander RV & Outdoors Truck Series owner’s playoffs with his season-best 12th-place finish at Richmond Raceway on Thursday night. After receiving a penalty for running over the choose-lane marking and having to start from the rear of the field at the start of Stage Two, Smith made his way all the way back to 11th by the end of the stage.

He remained 11th when a caution occurred on Lap 175 but moved up to eighth for the ensuing restart on Lap 181 when a handful of trucks pitted. Crew Chief Danny Stockman played the percentages that racing on a short track would lead to a caution over the final 70 laps. Unfortunately, the race went all the way to the end without incident, and the JBL/Smith General Contracting Tundra would end the day one lap down in the 12th spot.

The No. 51 team will enter the owner’s playoffs as the ninth seed, three points behind the cutoff line for advancing to the Round of 8 when the playoffs begin next Thursday at Bristol (Tenn.) Motor Speedway.

Chandler Smith, driver of the No. 51 JBL/Smith General Contracting Tundra for KBM:

“We had a good No. 51 JBL Toyota Tundra. I felt like we just needed to have another caution at the end so that we could’ve got our final set of Goodyear tires and made one last adjustment. We were already really close and just kind of over adjusted on our last pit stop and got us into a tight bind, but we were going to undo it and fine tune on it a little bit more. I felt like before that we were a top-three truck. It’s something every race – you know what I mean? It happens to the greatest out there, we just have to do the best we can with what we have. We’re going to end up having a good race where we put everything together and when we do that, we are going to be hard to beat. We’ll move on, go to Bristol and have fun there.”

The No. 51 finished the regular season in the Gander Trucks owner’s championship standings. The team enters the owner’s playoffs ninth on the playoff grid, three points behind the cutoff line for advancing to the Round of 8.

Smith will be back behind the wheel of the No. 51 JBL Tundra when the NASCAR Gander RV & Outdoors Truck Series resumes action on Thursday Sept. 17 at Bristol (Tenn.) Motor Speedway. Live coverage of the UNOH 200 will be on FS1, Motor Racing Network and SiriusXM at 7:30 p.m. ET.