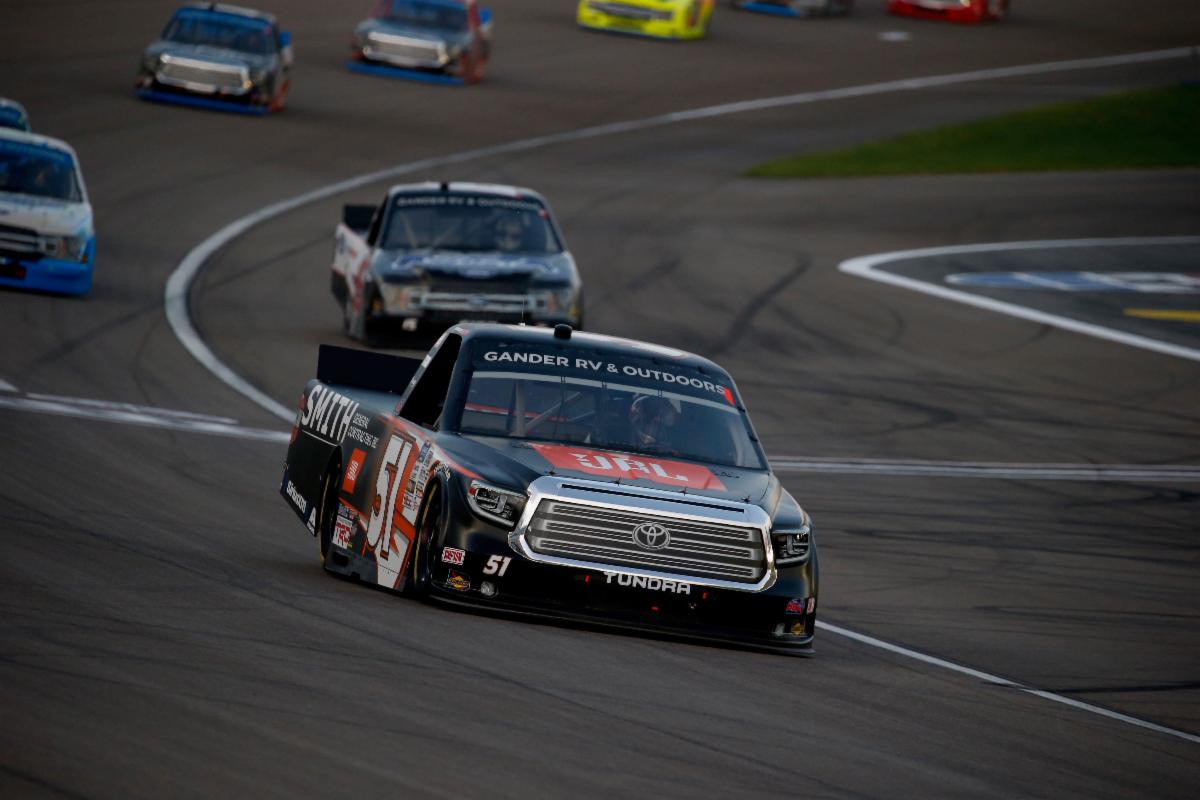 Making just his second career start on a mile-and-a-half track, Chandler Smith methodically maneuvered his way through the top 10 in the Final Stage of Friday night’s World of Westgate 200 at Las Vegas Motor Speedway to pick up his second consecutive top-five finish in Truck Series action, and the first of his career on a 1.5-mile track.

Back-to-back top-five finishes. How was your first trip to Las Vegas?

“It was my second ever mile-and-a-half, so the biggest thing for me was starting fresh with this mile-and-a-half. Kentucky, I kind of had written off in my brain, because we were just wrecking loose the whole race. I never felt like I even got to drive the truck. It was just a fresh page. I relied on Christian (Eckes) a good bit as far as how the track was going to be as far as throttle tracing, stuff of that nature. We fired off really, really free, but we were okay as far as speed goes. Deceleration, as far as getting down to the bottom, I was way too free. We started snugging it up and we kept going backwards and backwards. We got the deceleration issue fixed, and then the front tires weren’t grabbing good enough when it got to max load, so I could never really get back to the throttle good enough. Then we got that working on the last pit stop and we went to the front, where we should be. Overall, it was a good solid night for our JBL Toyota Tundra, but if we are going to race for points, we need to do a little bit better earlier on.”

Next up, your first superspeedway start. What are your thoughts heading into Talladega?

“I honestly don’t know what to tell you. I’m sketched out. I’ve never raced on a superspeedway, except for Michigan. I’ve talked to Danny (Stockman, crew chief) and he said our strategy is going to be riding in the back all day and wait for the big one and try to win the thing. I’m sure he’s probably going to think of something else. He really wants to win the owner’s points. We will see. I’m excited for it. I’m pumped. It will be my first restrictor plate race, but it’s going to be a different animal for sure.”

The No. 51 team ranks ninth in the Gander Trucks owner’s championship standings after two races of the Round of 10. The team is currently two points behind KBM’s No. 18 team for the final spot in the Round of 8. The bottom two teams will be eliminated after the next weekend’s event at Talladega (Ala.) Superspeedway.

Smith will be back behind the wheel of the No. 51 iBUYPOWER Tundra when the NASCAR Gander RV & Outdoors Truck Series resumes action on Saturday, Oct. 3 at Talladega (Ala.) Speedway. Live coverage of the Talladega 250 will be on FS1, Motor Racing Network and SiriusXM at 1 p.m. ET.