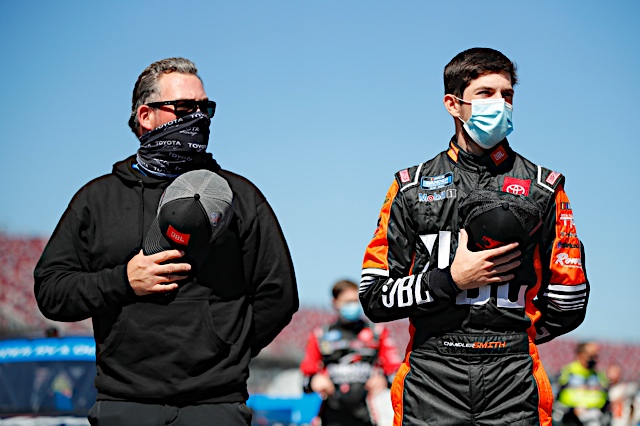 After a tough start to the season you’ve produced three consecutive top-five finishes. What has been the difference?

“The biggest thing for our No. 51 JBL team is consistency. We’ve had really strong Tundras, but we haven’t been able to put the runs together. In the last three races, we have definitely been putting the runs together, so it has been great for us.”

Do you feel like racing the ARCA race on Friday night will be beneficial?

Your teammates both raced the doubleheader weekend at Kansas earlier this year. Will you pick their brains before Saturday?

“I’m sure I’ll talk to Christian before the race. In the second Kansas race, he did really well. He was right up there with Matt (Crafton) at the very end. I will probably pick his brain a little bit to see if he has anything up his sleeve that he can let me know about.”

KBM-67: The No. 51 JBL team will race KBM-67 for Saturday’s race at Kansas. Kyle Busch led 72 laps en route to victory with the Tundra in July at Texas Motor Speedway in Fort Worth in its maiden voyage. Smith led four laps with KBM-67 in its most recent outing at Michigan International Speedway in Brooklyn in August but was relegated to a 38th-place finish after getting involved in an accident.