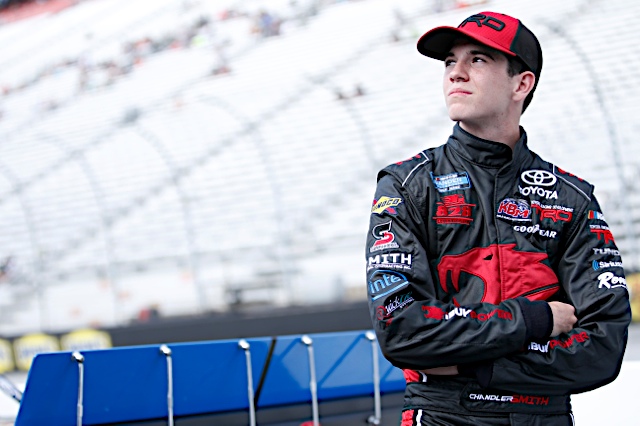 How has your transition been to racing in one of NASCAR’s top three divisions?

“It’s been great — the transition of getting into NASCAR and how the day goes. It’s completely different than short-track racing, Super Late Models, ARCA or anything like that. It’s totally different, the atmosphere is amazing and I definitely feel at home at KBM. Looking forward to Phoenix — we had a really good sim test when I went over and tested a little bit on the simulator last week. I think we’re going to be really strong right out of the box.”

How do you prepare for racing at a track that you’ve never raced at before?

“You start by going back and looking at some race film. Simulator time is really good — just knowing your off throttle and braking points and all that good stuff. I think we are going to have a really good iBUYPOWER/828 Logistics Toyota Tundra there.”

KBM-59: The No. 46 iBUYPOWER/828 Logistics team will unload KBM-59 for Friday night’s Lucas Oil 150 at ISM Raceway. Harrison Burton and the No. 18 team earned two top-five and three top-10 finishes in four starts with this Tundra earlier this year, with a best result of fourth coming at Chicagoland Speedway in Joliet, Ill.