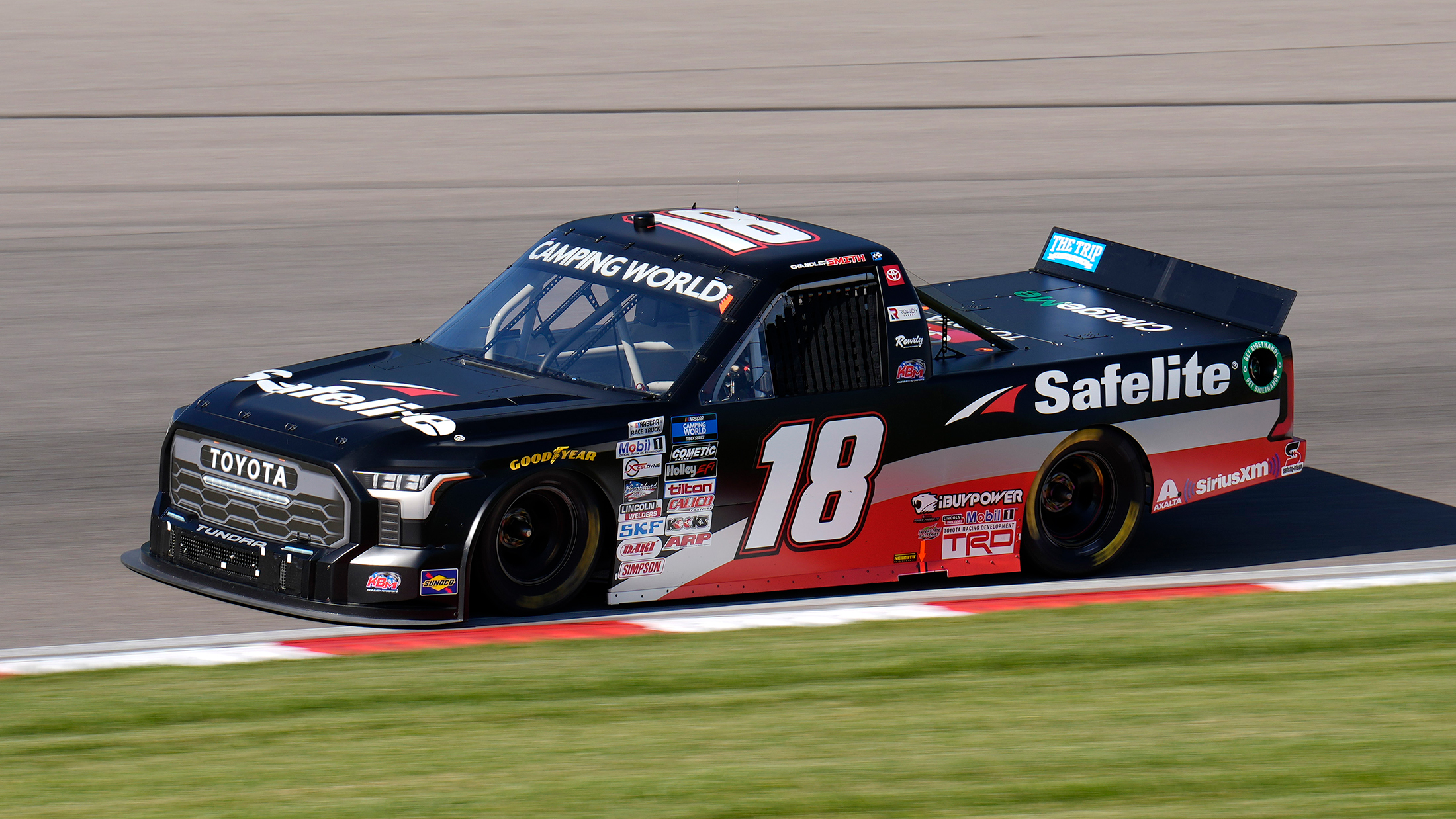 Chandler Smith snagged the lead from his KBM teammate Corey Heim 18 laps into Saturday’s Toyota 200 at World Wide Technology Raceway and set cruise to win Stage One. He regained the lead early in Stage Two and was battling side-by-side Grant Enfinger to keep the lead when Enfinger got loose underneath him and washed up the track.

The contact sent Smith sliding but he was able to correct the path of the Safelite Tundra TRD Pro before making contact with the wall with the rear of his truck. The contact from Enfinger did however cause significant damage to the right rear quarter panel, bedtop and spoiler of the No. 18 Toyota.

Smith maintained his position on the lead lap but had to come to pit road where the over-the-wall crew made repairs to his Safelite Tundra TRD Pro, put on four fresh tires and sent him back on track to finish out Stage Two.

Despite the damage, Smith remained one of the fastest trucks in the field and battled his way back up the scoring pylon. He was running fourth with two laps remaining when a one-truck accident set up NASCAR overtime. The Safelite Tundra lined up on the inside of row two, behind Heim and the two KBM trucks worked together to push out in front of the top lane.

After pushing Heim forward, Smith made a move to the inside of his teammate attempting to pass him as the went down the frontstretch, but Heim turned left to block his momentum, nearly sending the Safelite Tundra into the inside wall. Having lost ground to Heim avoiding the wall, Smith tried to make it up into Turn 1, but ended up falling in line in the third position. A four-truck accident occurred just after the field took the white flag, ending the race per NASCAR overtime rules.

Smith’s third-place finish was his fourth consecutive top 10 and helped move him up two positions to second in the regular season standings. With five races remaining before the start of the playoffs, the Georgia driver finds himself 17 tallies behind reigning series champion Ben Rhodes.

How did you make it through the field?

“To be honest with you if the 23 (Grant Enfinger) didn’t run out of talent in stage two, we would have probably lapped half the field easy. Our truck was stupid, stupid fast. Hats off to Danny (Stockman), everybody at KBM (Kyle Busch Motorsports). They gave me a really fast Safelite/ChargeMe Toyota Tundra. It sucks really bad, because even there at the end our tires are beat, probably four times everybody else in the field and we still ended up third. Honestly, probably should have won the race, but got drove all the way to the fence once again. It is what it is, but glad to get a top-three out of it.”

Smith will be behind the wheel of the No. 18 Safelite Tundra TRD Pro when the NASCAR Camping World Truck Series resumes action Saturday, June 11th at Sonoma (Calif.) Raceway. Live coverage of the DoorDash 250 will be on FS1, Motor Racing Network and SiriusXM at 7:30 p.m. ET.