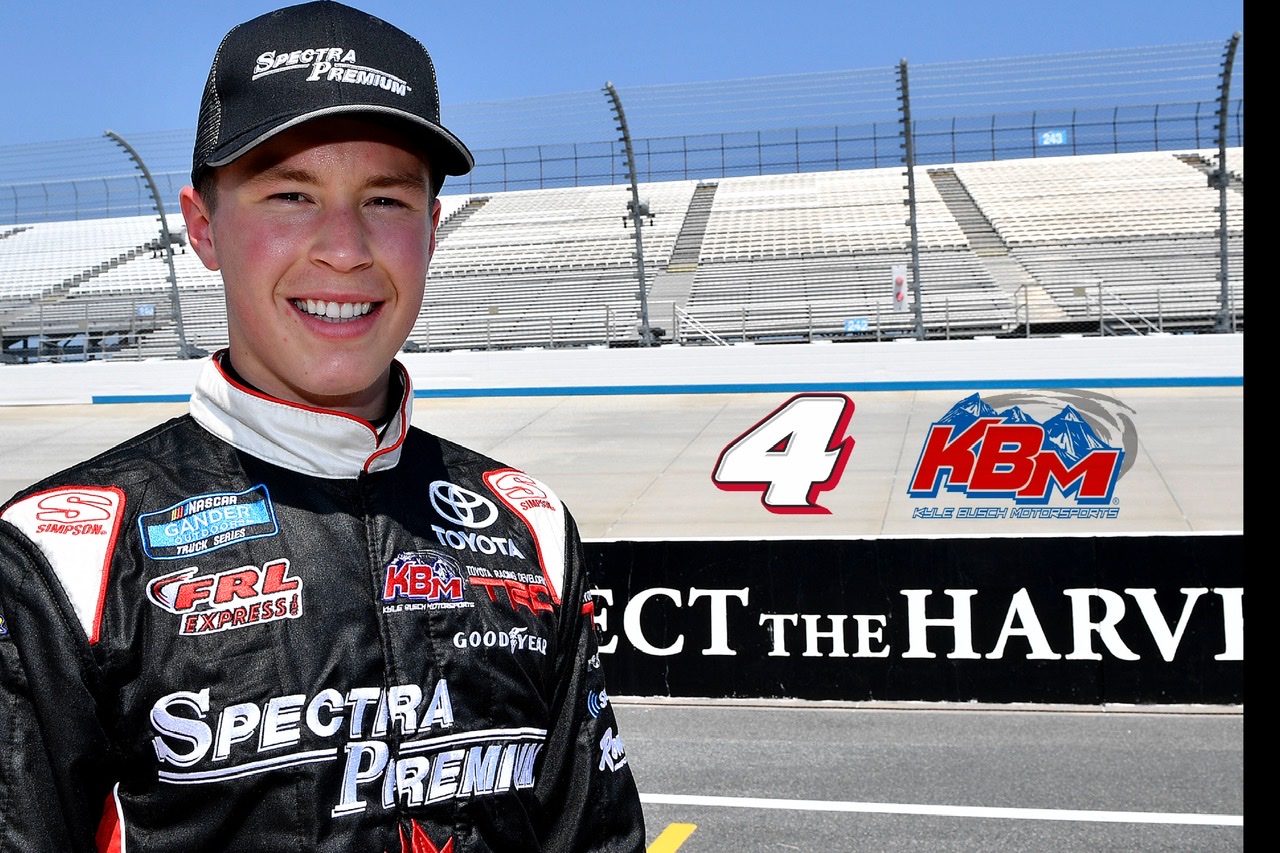 Kyle Busch Motorsports (KBM) is pleased to announce that 18-year-old Canadian driver Raphael Lessard will compete full-time in the NASCAR Gander Outdoors Truck Series in 2020. Lessard will pilot the No. 4 Tundra and compete for Rookie of the Year honors.

The talented teenager made five NASCAR Gander Outdoors Truck Series starts in 2019, three of those coming with KBM. Across his five starts he posted two top-10 finishes while recording an average starting position of 10.4 and average finish of 11.1. Lessard’s strongest run came in his final start of the season when he was running inside the top five with under 30 laps remaining before getting spun and relegated to a 12th-place finish.

In addition to a limited schedule in the Gander Outdoors Truck Series this season, Lessard posted 83 laps led, two top-five and three top-10 finishes across three ARCA Menards Series starts and one win, one top-five and two top-10 finishes in the NASCAR Pinty’s Series. His Pinty’s Series victory came at his hometown track, Autodrome Chaudiere in Vallee-Jonction, Quebec, on June 29 when he led a race-high 153 laps en route to the sentimental win.

“I’ve been working really hard the last few years to put myself in position to drive full-time for Kyle Busch Motorsports in the NASCAR Gander Outdoors Truck Series — so this opportunity is a dream come true,” Lessard said. “I can’t thank Kyle and everyone at KBM, Toyota and TRD enough for having the confidence to put me in their truck and it wouldn’t be possible without the support of my parents and everyone that has invested in getting me to this point. Being able to drive for such a great organization in one of NASCAR’s top three series is going to be awesome and I’m going to work hard on and off the race track to learn as much as I can to get better every race.”

“We’ve watched Raphael grow as both a driver and a person since joining our Super Late Model program in 2018 and we’re looking forward to being a part of his continued progression as he graduates to a full-time role in the Gander Outdoors Truck Series next year,” owner Kyle Busch said. “Similar to Erik Jones and Christopher Bell before him, Raphael joined our Super Late Model program and immediately won some big races. Then, when given a part-time Truck Series schedule, they all proved capable of running up front and earned the right to compete full time. Erik and Christopher went on to win races and a championship in trucks, now Raphael has the opportunity to continue to follow their blueprint.”

“Raphael has continued to prove himself as an outstanding race car driver,” said Jack Irving, Senior Manager, Commercial Director, Toyota Racing Development. “He has shown poise behind the wheel and has achieved solid results in the opportunities he’s been presented with thus far. We look forward to watching him grow and achieve even more with this full-time opportunity in 2020 behind the wheel of a Kyle Busch Motorsports Tundra.”

Lessard won two marquee events driving KBM’s famed No. 51 Super Late Model in 2018; the Short Track U.S. Nationals at Bristol (Tenn.) Motor Speedway and the Red Bud 400 ARCA/CRA Super Series race at Anderson (Ind.) Speedway. Overall in 16 starts for KBM split across the CARS Super Late Model Tour, the Southern Super Series and the ARCA/CRA Super Series, the talented teenager posted two wins, three poles, seven top-five and 10 top-10 finishes last season. He also competed in the prestigious Snowball Derby at 5 Flags Speedway in Pensacola, Fla. where he started seventh, led 68 laps and was in a position to contend for the win before a fluid leak ended his day with nine laps remaining.

Sponsor and crew chief announcements for Lessard are forthcoming as well as announcements on the rest of the KBM driver lineup for 2020.

Since debuting in 2010, Kyle Busch Motorsports (KBM) has quickly established itself as one of the most successful teams in all of NASCAR. Owned by 2015 Cup Series champion Kyle Busch and fueled by his passion for winning, the organization holds the Gander Outdoors Truck Series records for most career wins (75) and most wins in a single season (14 in 2014). In addition to collecting a series-record six Owner’s Championships, the organization has produced two championship-winning drivers; Erik Jones (2015) and Christopher Bell (2017).