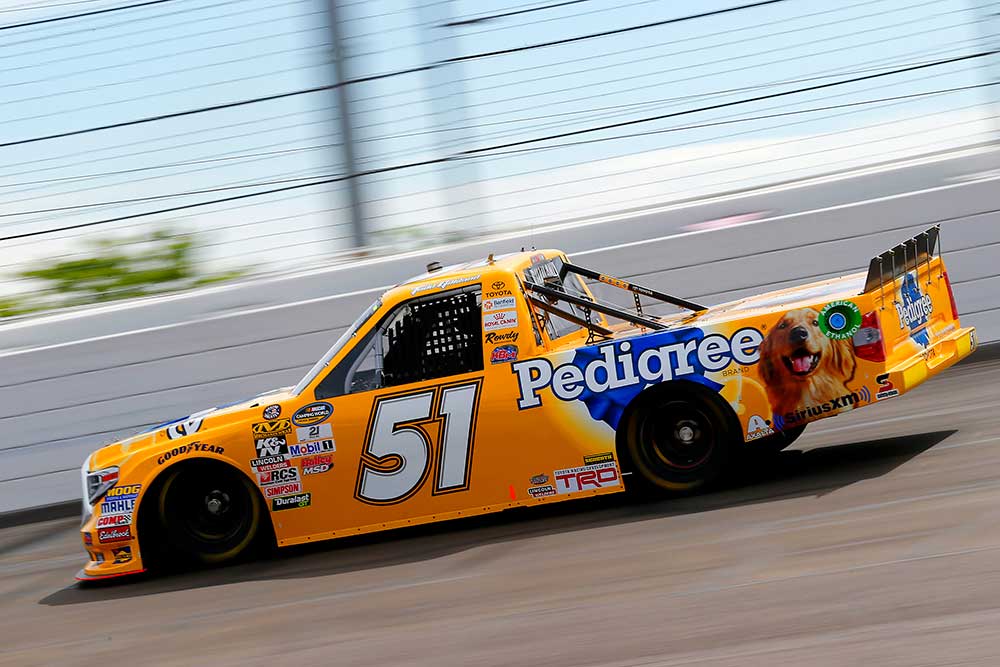 ● Todd Gilliland, driver of the No. 51 PEDIGREE® Toyota Tundra for Kyle Busch Motorsports (KBM), will make his third career start in NASCAR Camping World Truck Series competition Sunday in the Canada 250 at Canadian Tire Motorsport Park in Bowmanville, Ontario. At 17 years of age, Gilliland is a third-generation driver and is the reigning NASCAR K&N Pro Series West champion.

● Driving the No. 51 PEDIGREE® Toyota Tundra for KBM, Gilliland made his Truck Series debut earlier this season at Dover (Del.) International Speedway, where he was scored a 20th-place finish after the right-front wheel broke on his Tundra 116 laps into the 200-lap event. Prior to the incident, Gilliland competed among the top-10 and raced as high as second place. A similar situation unfolded for the teen’s second start just weeks later at Gateway Motorsports Park in Madison, Illinois, where he raced in the top-five throughout the event but had his race cut short due to an issue with the transmission. Unable to finish the race, he was scored with a 21st-place result.

● Sunday’s Truck Series race is the third of six in which Gilliland will compete in 2017 for KBM. In addition to the races at Dover, Gateway and Bowmanville, Gilliland is scheduled to race the No. 51 PEDIGREE® Tundra in events Sept. 23 at New Hampshire Motor Speedway in Loudon and Nov. 10 at Phoenix International Raceway. PEDIGREE® will also sponsor Gilliland’s race in the No. 46 Tundra Oct. 28 at Martinsville (Va.) Speedway.

It’s been a little while since your last race in the Truck Series. What are your thoughts as you get ready to compete in the series again?
“I’m really excited to be back in the No. 51 PEDIGREE® Toyota Tundra for Canada. It feels like it’s been a long time since my last race at Gateway and I’m anxious to get back behind the wheel. It’s going to be a really busy weekend for me, practicing Saturday in Canada and then flying to race at Langley Speedway that night for the K&N Pro Series East race, and then flying back to Canada to race in the Camping World Truck Series on Sunday.”

Speaking of the K&N Pro Series, you have been pretty busy racking up wins. What has it been like continuing the success from last season?
“The K&N Pro Series is going great so far. I just won my last race last weekend at Douglas County in the Pro Series West. It has been a great year for us. All together, we have nine wins now and I’m looking forward to hopefully clinching the East and West championships by the end of the season.”

How excited are you to get back on a road course?
“Road-course racing is a lot of fun. It can be demanding for the driver, but I feel like that’s a good thing. It keeps you on your toes. I enjoy it, turning left and right, sliding around, jumping curbs – those are all things us NASCAR drivers aren’t really used to. I’m ready to get out there, learn from my teammates and do the best I can.”

The Manion Report:
Kevin “Bono” Manion guided KBM’s No. 51 team to one win, one pole, four top-five and seven-top 10 finishes with four different drivers behind the wheel last year in his first season as a Truck Series crew chief. Prior to joining KBM, the Massachusetts native collected five victories in 10 seasons atop the pit box in NASCAR’s premier series, including two marquee wins with Jamie McMurray in 2010; the Daytona 500 and the Brickyard 400. Before graduating into NASCAR’s top division, he guided Martin Truex Jr., to back-to-back NASCAR XFINITY Series titles in 2004 and 2005. In addition to his five Monster Energy Cup Series victories, Manion boasts 15 XFINITY Series wins; 13 with Truex Jr., and two with Dale Earnhardt Jr.
In Manion’s lone Truck Series race at CTMP, Canadian racer Gary Klutt qualified 15th and finished 11th in last year’s event.
Share this post
Share on FacebookShare on Facebook TweetShare on Twitter