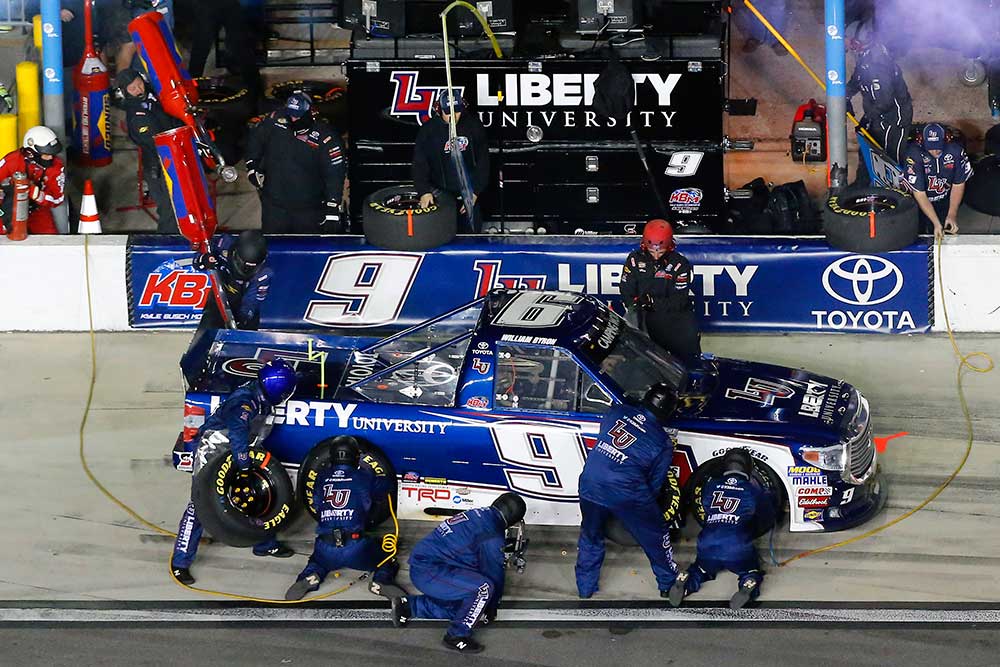 The 2016 NASCAR Camping World Truck Series (NCWTS) kicked off Friday night under the lights at Daytona International Speedway and as usual it was an exciting 100 laps of racing. William Byron made his second-career start in the truck series, and his first truck start at Daytona for Kyle Busch Motorsports (KBM). Despite being a rookie, Byron made some veteran moves to avoid several multi-truck accidents and brought home his No. 9 Liberty University Tundra in 13th place.

Byron started 13th and with the help of his spotter was able to maintain the bottom lane, which seemed to be the fastest throughout much of the race. He fell back in the field after making several pit stops during a caution on lap 43. While coming to the pits under green, several trucks wrecked behind Byron. He locked up his tires which blew the left-front tire causing some damage to the fender. The KBM team fixed it as best they could, but he still had a bit of a vibration from the broken splitter. 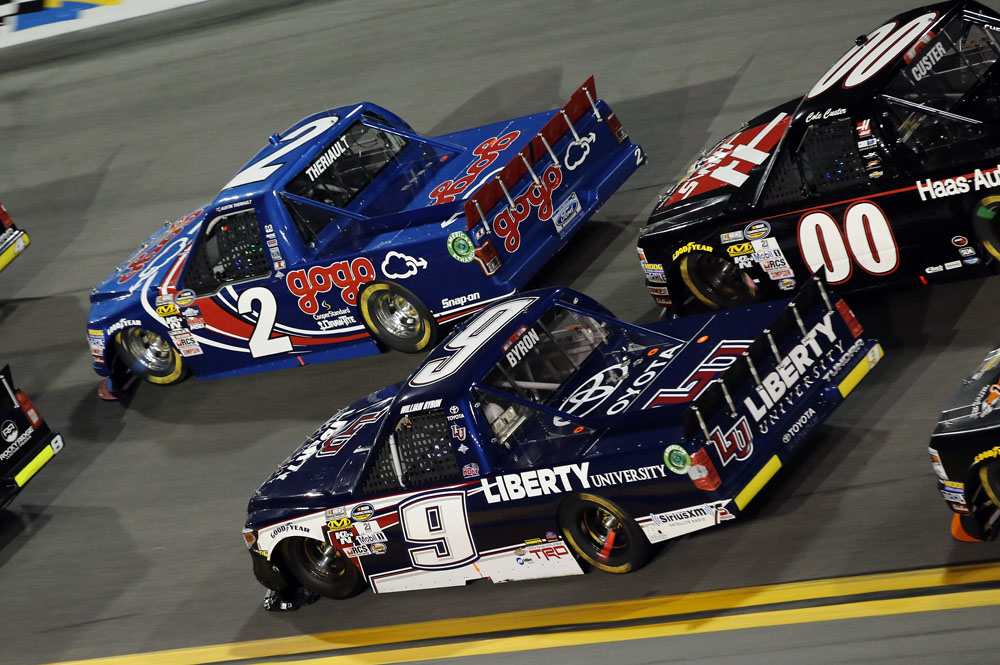 He drafted his way back up to 14th place with 18 laps to go. He was just far enough back to be able to avoid an 18-truck accident right in front of him with eight laps remaining the race. Listening to his spotter, he got down on the apron of the track and slowed down as much as he could to avoid the spinning trucks and debris.

After a nearly 30-minute red flag to clean up the track, Byron pitted for four tires to finish the race. He restarted eighth with two laps to go, but another big wreck happened all around him. His KBM teammate, Christopher Bell’s Tundra flipped wildly down the track and several other trucks spun out of control. Byron’s Tundra sustained damage, but he was able to make it back around to cross the finish line in 13th place.

“My first race at Daytona was interesting,” Byron said. “The pack racing was intense all the way throughout the race and we never really got a chance to relax, so that was fun and also at the same time just kind of causes those big wrecks at the end, but we had a really good Toyota Tundra. I’m just proud to give Liberty University a good finish and we’ll move on to Atlanta where we can race and I feel like we’ll have a good truck there.”

The Truck Series returns to action next Saturday at Atlanta (Ga.) Motor Speedway on Feb. 27. Live coverage of the Truck Series race will air on Fox Sports 1 at 4:30p.m. ET.