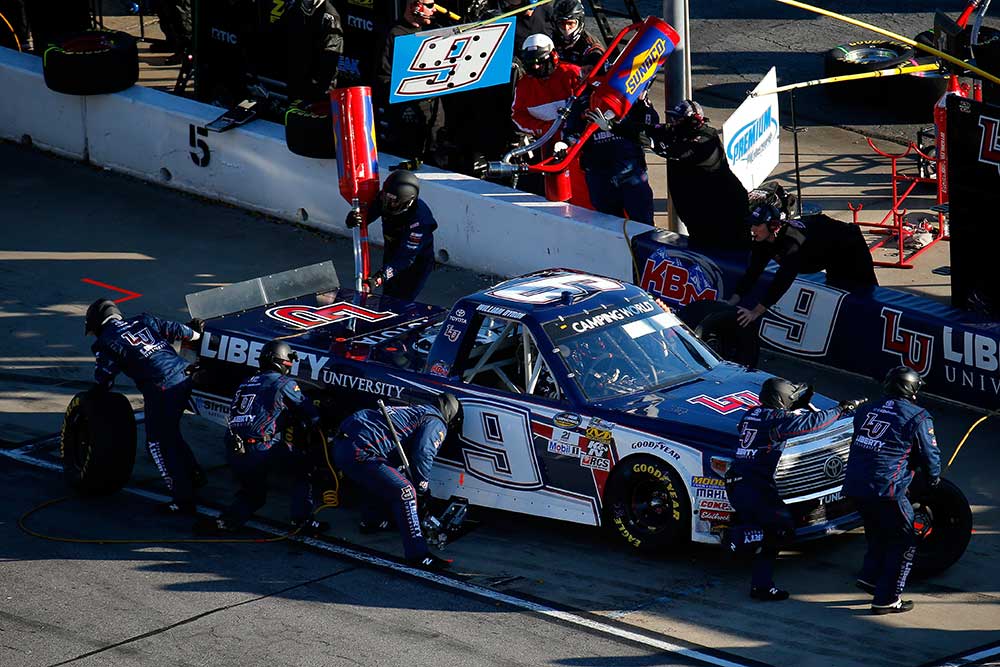 William Byron came to Atlanta Motor Speedway ready to put the pack-racing of Daytona behind him and put to use what he learned at his rookie test at the 1.54-mile track earlier this month. It was clear Byron learned quite a bit as he drove his No. 9 Liberty University Tundra from 15th place up to second within the first 54 laps of the race. Unfortunately, he was not able to compete for the win as a mechanical failure took him out of the race on lap 59.

Byron started 15th and wasted no time moving up through the field. He gained eight positions in the first 11 laps of the race. As competitors began to pit before the 20-minute caution clock expired, Byron moved up to third. With a solid pit stop for four tires and fuel under caution on lap 39, he was able to maintain third place.

By lap 52 he passed Spencer Gallagher for second, and had his sights set on race leader Matt Crafton. While driving into turns one and two, Byron saw his oil pressure gauge drop and before he could radio the team, smoke poured from the rear end of the truck indicating a blown engine. Unable to finish the race, Byron was scored last in 32nd place.

“It’s just unfortunate,” Byron said. “We blew a motor so there was nothing we could really do. I’m thankful for all my KBM (Kyle Busch Motorsports) guys. We had a really fast Toyota Tundra. We came from 15th and got to second there and just needed a few adjustments, but we were going to be there. I just can’t thank Liberty University enough for being on board and we’ll get them at Martinsville.”

The Truck Series takes a few weeks off and will return to action on Saturday, April 2 at Martinsville (Va.) Speedway. Live coverage of the Truck Series race will air on Fox Sports 1 at 2:30p.m. ET.