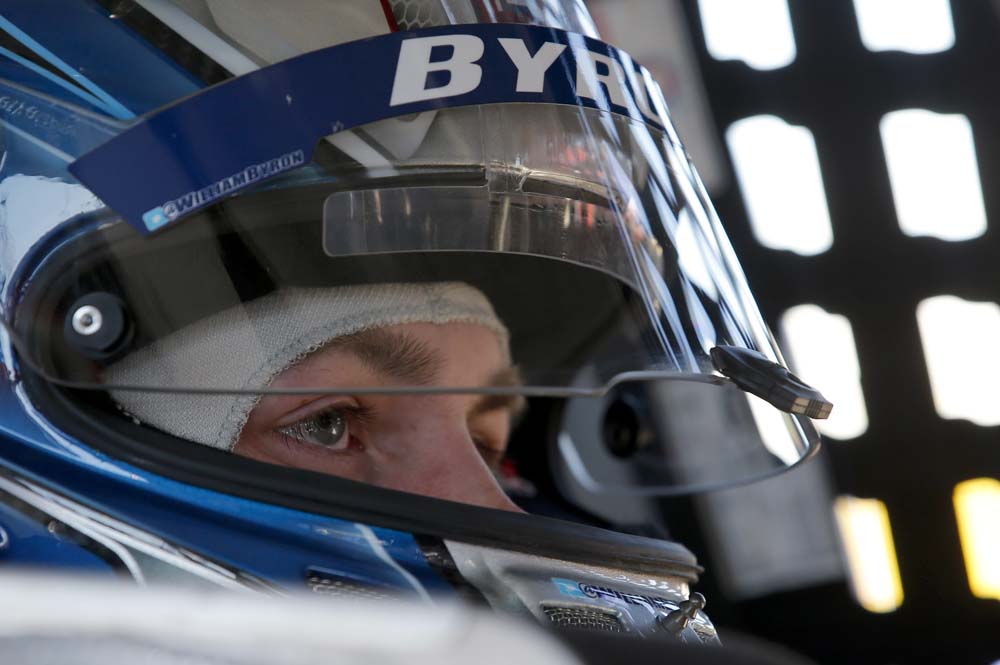 MOORESVILLE, N.C. (Nov. 15, 2016) – Despite no longer being eligible to win the 2016 NASCAR Camping World Truck Series (NCWTS) Driver’s championship, William Byron has still set some pretty high goals for the final race of the season at Homestead-Miami (Fla.) Speedway. He is still determined to make one more trip to Victory Lane this season to earn the seventh win of his rookie season. The No. 9 Kyle Busch Motorsports (KBM) team is also competing for the 2016 NCWTS Owner’s championship, which would be the fifth for KBM.

After a heartbreaking elimination from The Chase last weekend at Phoenix (Ariz.) International Raceway, Byron was quick to replace the disappointment with anticipation for the next race. He is determined to finish his record-breaking rookie season with one more win to add to his collection of 2016 trophies. After claiming six victories this year, he is already the winningest rookie in NCWTS history. One more would just be icing on the cake.

Byron and his team are also still eligible for the 2016 NCWTS Owner’s championship, battling his KBM teammate Christopher Bell, fellow Toyota driver Matt Crafton and Johnny Sauter. The driver who finishes highest among those four will take home the owner’s trophy, which would be the fifth for KBM in only seven seasons of competition. In fact, KBM has a chance at three different winners in one race Friday night. Depending on how the race plays out, Daniel Suarez could win the race, Christopher Bell could win the Driver’s championship and William Byron could win the Owner’s championship all in one night.

Byron used one of his rookie tests at Homestead in August and hopes the experience he gained will benefit him Friday night. This will be his last start in a KBM Tundra before moving on next year, and he desperately wants one more opportunity to celebrate with his team and prove that being eliminated from the Chase did not eliminate their competitiveness and desire to win.

Does knowing you are not in the Championship 4 change your mindset going into the final race?
“I think a little bit knowing we have the pressure lifted off our shoulders. We can just go out there and race, but we still have a lot on the line as far as how my team wants to finish out the year and we can still win the Owner’s championship. We’ve had an awesome year, so it would be really cool to go out with a win. Hopefully we can do that.”

How much would it mean to you to get a seventh win before the season ends?
“We tried to get one last week, but to get a seventh win would really cap this year off. A win at Homestead would also give our team the Owner’s championship for KBM. Since we were eliminated from the Driver’s championship last week, it would mean a lot to my team to be able to give Kyle and Samantha (Busch) their fifth owner’s title. We’ve got an amazing team and Rudy (Fugle, crew chief) has done a fantastic job this year helping me grow as a race car driver.”

What did you learn from your test at Homestead a few months ago?
“It was really hot and muggy, so I learned a little bit about the race track and a lot about what it’s like to be in Miami in August. It’s great experience just to have a feel of the race track and a visual before you go there. Hopefully that will help us unload close to what we need to be fast.”

Talk about the final race of the season with William at Homestead:
“We were lucky enough with William being a rookie that we were able to test at Homestead in August. Homestead is a rhythm race track, kind of like Martinsville, but at a mile-and-a-half track. Having him learn the rhythm there, how the tires get worn out and all that stuff was great. We’re just going to go down there and put the best truck on the race track we can and we’ll give it everything we’ve got and fight all night long for that Owner’s championship and hopefully our seventh win of the season.”

Fugle has one win (Busch – 2013), two top-10 finishes and his Tundras have led 62 laps in two starts as a crew chief at Homestead.