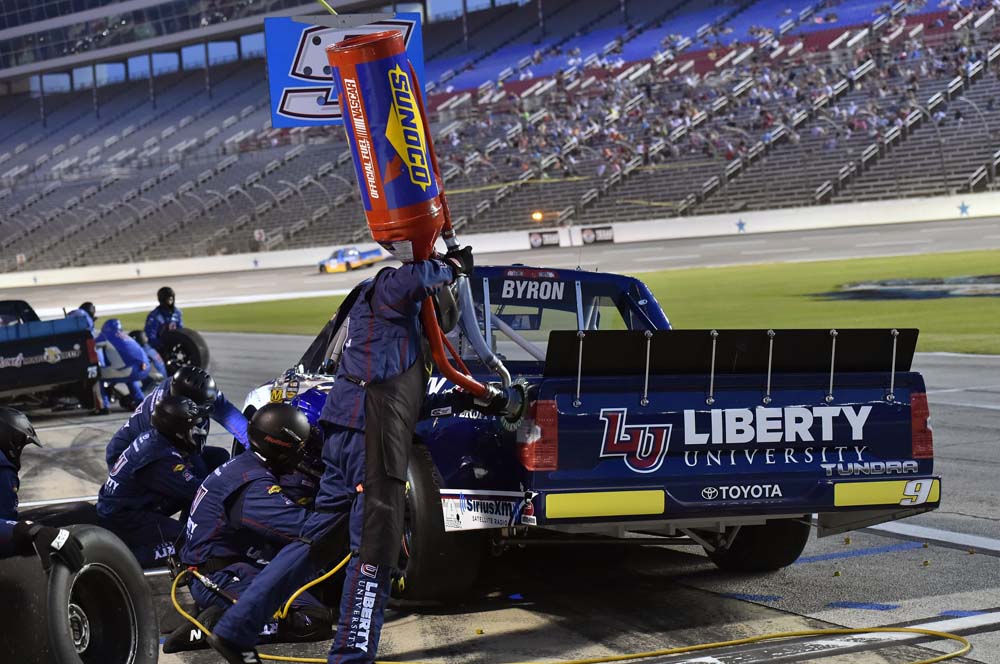 MOORESVILLE, N.C. (Nov. 1, 2016) – There are only two tracks on the NASCAR Camping World Truck Series (NCWTS) schedule which have two races each season, Martinsville (Va.) Speedway and Texas Motor Speedway in Ft. Worth. The teams tackled the short track of Martinsville last weekend, and this week face the challenge of returning to the high banks of Texas. William Byron has been looking forward to going back to Texas after taking the win there in June in his first start at the 1.5-mile track. He hopes to repeat that performance Friday to advance to the Championship 4 in Miami-Homestead (Fla.) Speedway.

The 18-year-old rookie did not dominate the first Texas race in June, but drove like a veteran in the closing laps to take the checkered flag. Matt Crafton had led 133 of 167 laps and looked like he would easily get the win. Byron lined up alongside Crafton for the final restart of the race. The two battled for the lead for several laps before Byron fell back in line in third place, but he was not about to settle for that position. With 10 laps to go he passed Johnny Sauter for second place and had his sights set on Crafton. Byron slowly reeled him in with every passing lap and with five to go was able to get by him for the lead. Once he was out front, Byron drove away from the field in his Liberty University Tundra to win the race.

Kyle Busch Motorsports goes for three consecutive wins at Texas this weekend after claiming the last two NCWTS events at the 1.5-mile track. Byron won in June and Erik Jones claimed the victory last November after leading 117 laps in the same Tundra Byron will race Friday night. Owner-driver Kyle Busch also won with this truck at Texas in the fall race in 2014.

With only two races remaining in the Round of 6, and one slot already filled by last weekend’s winner Johnny Sauter, the competition will be fierce at Texas trying to lock in one of the three remaining spots. If Byron can sweep this year’s Texas races, he’ll be on his way to the championship round, and perhaps another NASCAR series championship to go with last year’s K&N Pro Series East title.

Having won at Texas in June, do you feel like this is your best shot at winning in this round of the Chase?

“I think so. I have the track time and the experience of knowing what it takes to win there. The only difference will be the track conditions since it was much hotter when we raced there in June. It was really hard to judge what the truck would be like when the lights came on and everything cooled off. It will be interesting to go back there this weekend and see what the track is like. I think we’re going to have a lot of speed and hopefully get that ticket to the next round of the Chase.”

This is the first time you haven’t led the point standings since mid-June. Is that a concern with this Chase format?

“I think it’s different, but last weekend we had a lot of adversity in practice, in qualifying we had oil on the track before we went out and in the race we had a couple mistakes. It’s good we were able to rebound from that and be ahead of the cutoff line for the final round. We also know we can’t lean on that gap, so we have to try to get a win like we have all year. I know we can turn the adversity into a positive and hopefully move on to the final round.”

How does Texas compare to the other intermediate tracks on the NCWTS schedule?

“I think the track is a little bit more worn out and a little bit flatter than Atlanta. It’s a slight similarity to Atlanta but that track is much colder since we race there in February. It’s very different from Charlotte, Chicago, Kansas and Vegas. Hopefully we can lean on the things we’ve done well with at other intermediate tracks and get a win.

Do you think Texas is the team’s best shot at winning a race in this Round of 6?

“I feel like both Texas and Phoenix are good tracks for us coming up in this round. Phoenix has been predominately KBM’s best track. As a group, we probably should have won every single time we’ve raced there. We’re really good at Texas too, so we want to get a good, solid finish and if we’re in a good spot there at the end, we’ll fight for a win.”

KBM-021: The No. 9 Liberty University team will race KBM-021 for Friday’s Striping Technology 350. Byron won with this Tundra at Kentucky in July. Erik Jones also won with it at Texas last November. With nine wins, it is the winningest Tundra in the KBM fleet.