Byron Ready to Tackle the Tricky Triangle of Pocono 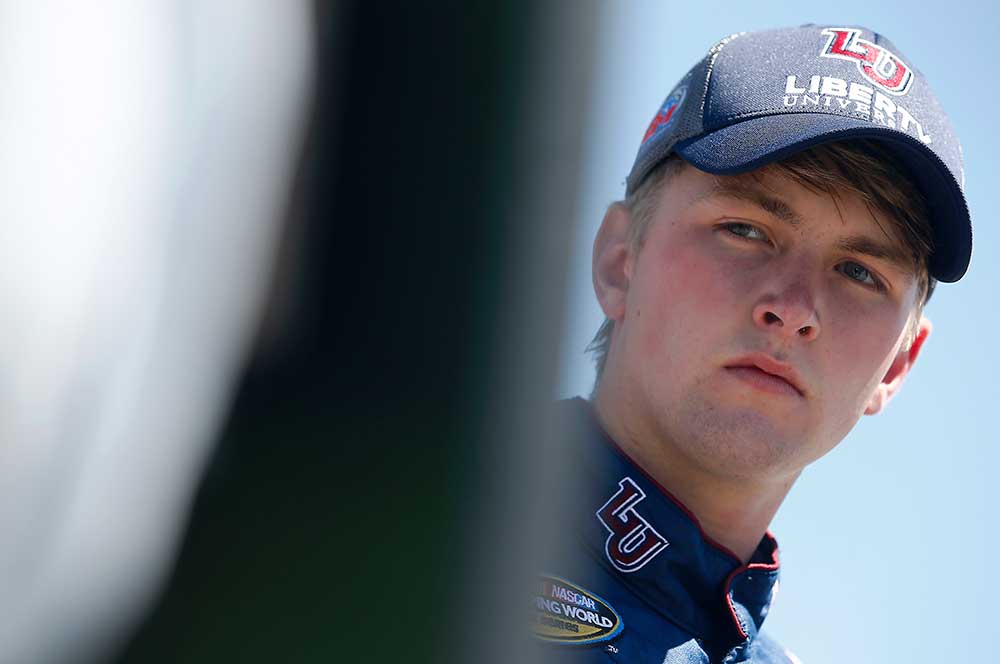 MOORESVILLE, N.C. (July 26, 2016) – After surviving his very first race on dirt last week, William Byron is ready to return to pavement racing. The 18-year-old rookie will now face a new challenge – a track without a fourth turn. Pocono Raceway, known as the “Tricky Triangle” due to its three distinct turns, can be a difficult track for even the seasoned veterans to maneuver. Byron is up for the challenge and is hoping to capture a record-breaking fifth win in his rookie season in the NASCAR Camping World Truck Series (NCWTS).

To help prepare for the Pocono Mountains 150, Byron competed in the ARCA Racing Series event last month at Pocono. He started third, led three laps and finished eighth for Venturini Motorsports, but gained valuable experience in the process. The extra track time will help him get up to speed faster when he climbs in his No. 9 Liberty University Tundra Friday afternoon for practice.

Byron will also have a pretty stout Kyle Busch Motorsports (KBM) Tundra for Saturday’s race. He raced this Tundra twice this year, and ended up in Victory Lane both times. This is the same truck which won at Kansas Speedway for Byron’s first NCWTS win in May, and again at Texas Motor Speedway in June for his second win of the season. He hopes to keep the winning streak alive with win number five at Pocono.

Of course Byron is not the only one who hopes to win at Pocono. Four members of his KBM team hail from the state of Pennsylvania and consider Pocono their home track. Truck chief Cody Glick (Smethport), tire specialist Tyler Keiper (Pocono Summit), engine tuner Brian Fisher (Chambersburg) and spotter Tony Hirschman (Northampton) are all hoping to get a win in front of their friends and families Saturday. Based on the team’s performance so far this season, it is a good bet they end the race with a celebration in Victory Lane.

Are you glad to be racing on pavement again this weekend?

“Being back on pavement is a good thing for me. It’s more in my comfort zone, so I’m excited to get back on the track at a place where I raced an ARCA car last month, so I have some knowledge of it.”

What did you learn about Pocono from running the ARCA race last month?

“I learned how different it is from anything I had done and I got a feel for how flat it is compared to most places where we race. It has long straightaways and tight corners, so it’s good to get those marks down and get a rhythm of the track before I get in the truck this weekend.”

What is the trickiest part of the “Tricky Triangle”?

“I’d say the tunnel turn is the hardest because if you miss it by a couple feet it’s a difficult corner to make. It’s a corner where you can make up a lot of time, but if you don’t hit it right you lose a lot of time. It’s important to get through there and get your truck handling the way you want it to so you can make time on the two straightaways.”

What is the trickiest part about the Tricky Triangle?

“The hardest part about Pocono is usually strategy. It’s a short race so you only have to pit once, but you usually end up pitting twice and somebody ends up running up front because of something weird happening on the race track, so strategy is the hardest part. Having a fast truck there is really important too. All the turns are a little bit different. Turn one is high load like a mile-and-a-half and turn three is really flat like Gateway, so putting all three corners together will be important.”

KBM-023: The No. 9 Liberty University team will race KBM-023, for Saturday’s Pocono Mountains 150. This is the same truck Byron has won twice with this season at Kansas and Texas.

Fugle has one top-10 finish and one pole as a crew chief in two starts at Pocono in the Truck Series. Erik Jones won the pole and was 10th last year after leading nine laps.