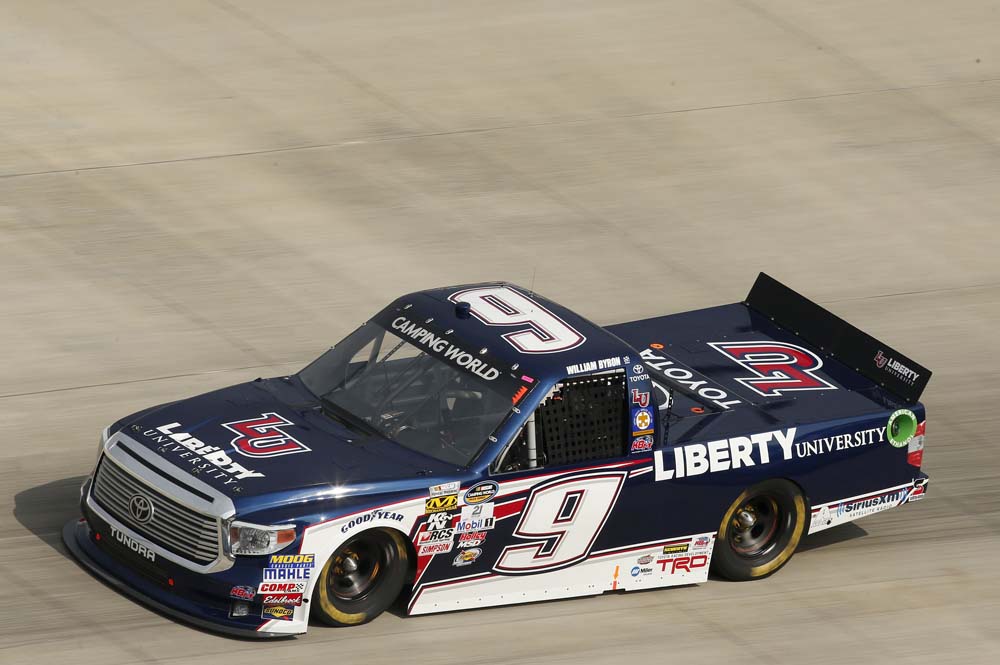 William Byron has fond memories of Dover International Speedway after winning the NASCAR K&N Pro Series East championship there last year. He hoped to add another fond memory this weekend by winning his second NASCAR Camping World Truck Series race in-a-row. It looked as though that might happen in the first half of the race when he led 80 laps, but circumstances changed in the second half leaving him with an 11th -place finish.

Byron started on the pole thanks to a fast practice speed and Mother Nature washing out qualifying. Luckily the skies cleared in time for the race and when the green flag dropped, Byron pulled away from the field. He led the first 80 laps of the race until a pit stop under caution put him fifth on the restart behind drivers who either stayed out, or only took two tires.

His Liberty University Tundra was loose throughout the race, but he was able to maintain sixth place. He pitted for the final time under caution on lap 170 for four tires and one more adjustment. Unfortunately, the team received a penalty for going over the wall too soon, which sent Byron to the tail of the lead-lap trucks in 17th place.

With 26 laps remaining in the race, he was determined to make up as many positions as possible before the race ended. In those final laps Byron was able to gain six spots to finish the race in 11th place.

“We led there and then we got shuffled back on a couple restarts,” Byron said. “We were probably a fifth or sixth-place truck until about 50 to go, when we decided to pit and try something different. We got an over-the-wall penalty, but it’s all good. We needed to try something different to try to get a win and it’s all part of learning. It was a tough day out there, but at least we could salvage an 11th-place finish.”

The Truck Series continues next Friday, May 20 at Charlotte Motor Speedway. Live coverage of the Truck Series race will air on Fox Sports 1 at 8:30p.m. ET.