Byron is Eager for His First Dirt Race at Eldora 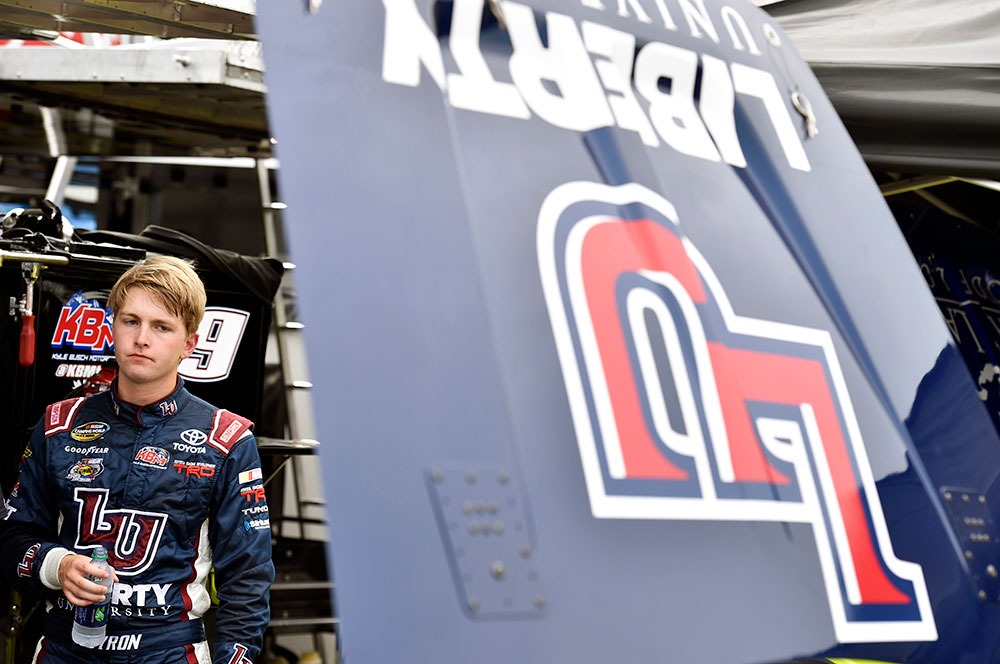 MOORESVILLE, N.C. (July 18, 2016) – William Byron has raced at many new tracks this year during his rookie season in the NASCAR Camping World Truck Series (NCWTS), but this Wednesday’s race may be his biggest challenge yet. He has quickly adapted to racing on bigger tracks, as three of his four wins this season have come on mile-and-a-half tracks, but adapting to dirt is a whole different story. Wednesday night will be Byron’s first start on a dirt track and he’ll be doing it at one of the most legendary dirt tracks in the country, Eldora Speedway in Rossburg, Ohio.

Until a few weeks ago, Byron had never even driven on dirt. He spent a day practicing in a dirt late model at Boyd’s Speedway in Ringgold, Ga., on his way home after winning at Kentucky Speedway. After a few laps he was hooked and is looking forward to racing his No. 9 Liberty University Tundra at Eldora. He also has a Kyle Busch Motorsports (KBM) teammate with quite a bit of dirt experience to call on for advice. Christopher Bell spent his entire racing career driving open-wheel cars on dirt tracks around the country until joining KBM and making the move to paved tracks. Bell won the NCWTS race at Eldora last year and the half-mile dirt oval ranks among his favorite tracks.

KBM teams have won twice at the half-mile clay oval across eight starts. In addition to Bell’s win last year, Darrell Wallace Jr., claimed the Golden Shovel in 2014. KBM Tundras have paced the field for 227 laps and have four top-five finishes. For the Aspen Dental Eldora Dirt Derby, Byron will be racing the same Tundra which Erik Jones drove to a fourth-place finish last year after starting 19th.

Although the 18-year-old rookie has never raced on dirt before, it would be a mistake to count him out of competing for the win Wednesday night. Byron has shown a knack for picking up on new tracks pretty quickly, and with the help of his crew and teammates, he may be able to make the dirt fly on his way to Victory Lane.

Have you asked your KBM teammate Christopher Bell for advice since he’s got so much experience on dirt?
“I’ve been able to get a lot of advice from Christopher lately. He’s been so helpful and I got the chance to go to Eldora and watch him Friday in the sprint car. Since I was racing the KBM late model in Anderson, Ind., we decided to drive over and check it out. It was really cool to watch him in a sprint car.”

What is your goal for the Eldora race since it’s your first dirt race?
“Honestly, our goal every time we go to the race track is to win, so Eldora will be no different. I won’t put the pressure on myself like I do at our other tracks, but I still would love to get the Golden Shovel.”

What is your strategy for Eldora since it will be William’s first race on dirt?
“Eldora is more like a low-grip asphalt race than a dirt race with the way the trucks drive and the tires are, so I; think William will do fine. We’ll just go slow and steady in practice, kind of like we’ve been doing at these new tracks, and by the time we get to the middle of the race he knows what he’s doing. Hopefully the same thing will work out. Either way we’re just going to go have some fun and be competitive.”

KBM-X134: The No. 9 Liberty University team will race KBM-X134, for Wednesday’s Dirt Derby at Eldora. This is the same Tundra Erik Jones drove to a fourth-place finish at Eldora last year.

Fugle has one top-five finish as a crew chief in two starts at Eldora in the Truck Series. Erik Jones finished fourth last year after starting back in 19th place.