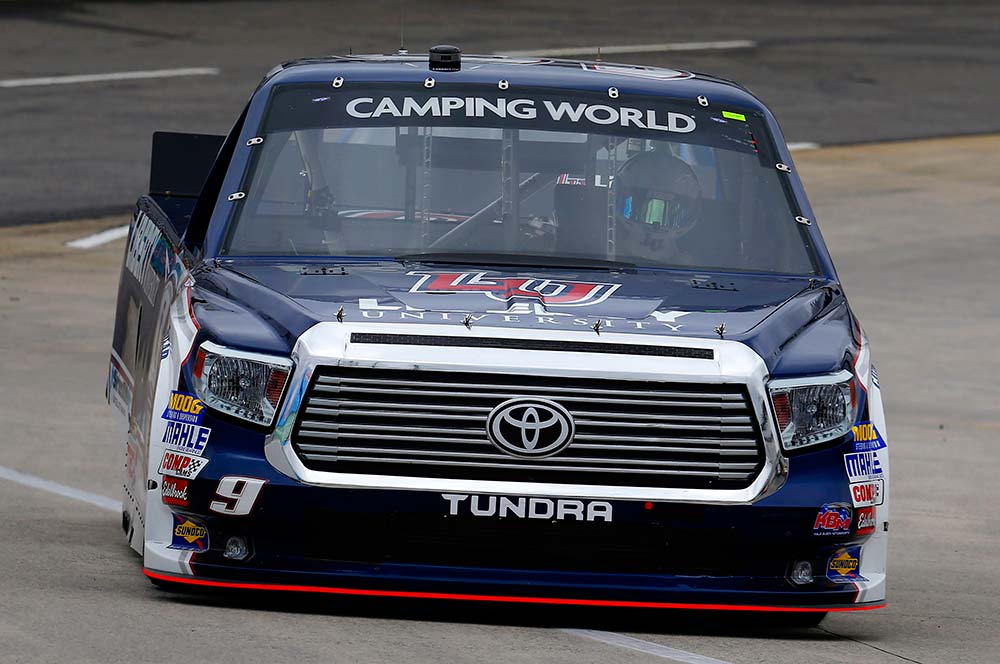 MOORESVILLE, N.C. (May 3, 2016) – Just over one month ago, William Byron earned his best NASCAR Camping World Truck Series finish at Martinsville (Va.) Speedway when he placed third at the “paperclip.” The 18-year-old rookie contender has had to wait a month to climb back into his No. 9 Liberty University Tundra to race again, but Byron has stayed busy with school and other forms of racing to keep his momentum going into Friday night’s race at Kansas Speedway.

The weekend after Martinsville, Byron was off to Fairgrounds Speedway in Nashville, Tenn., to race for Kyle Busch Motorsports (KBM) in the ARCA CRA Super Series event where he started 16th and finished fifth. His fellow classmates at Charlotte Country Day School actually saw him at school for a full week following Nashville, before he was off to test his Tundra at Bristol (Tenn.) Motor Speedway on April 18-19 as one of his rookie tests. Byron was so pleased with his test results at Bristol that he was ready to take on the half-mile bullring immediately, but is forced to wait until August for the NASCAR Camping World Truck Series race.

Next on the busy teen’s schedule was another KBM Super Late Model race at 5 Flags Speedway in Pensacola, Fla., last weekend. There he started third and finished seventh. Then there was more testing, but this time at school as Byron prepares for his final month of high school and graduation day on May 27.

This weekend Byron will finally be able to get behind the wheel again to hopefully continue the momentum he started a month ago at Martinsville. In his only other mile-and-a-half track start this season at Atlanta, he appeared to be a contender. Byron started 15th, but with a fast Tundra worked his way up to second place. He was running second on lap 59 when suddenly his oil pressure dropped and an engine issue relegated him to a last-place finish. Despite what the end result was on paper that day, Byron and the KBM team know they had a strong Liberty University Tundra and are looking forward to a much better result this weekend at Kansas.

Has the third-place finish at Martinsville given you more confidence heading into Kansas?

“The finish definitely has given me more confidence. I feel like we finally got a solid race under our belt and we can build from that to get good runs going in May at Kansas, Dover and Charlotte.”

How tough has it been to have so much time between your first top-five truck finish and the next race?

“It’s tough just because all of the truck races are so much fun and a challenge for me, given that this is my first year, that I want to race the very next weekend every time I get out of the truck. With that said, we’ve kept our momentum up by continuing to run Super Late Models with KBM at Nashville and Pensacola in April, and testing the Tundra at Bristol a few weeks ago.”

You have a new Liberty University television commercial debuting on FS1 during the race Friday. What will your friends at school think of that?

“I think my friends will really like that. I know I had fun filming the segment and from what I’ve seen it turned out nicely. It’ll be cool watching the race back and seeing the commercial.”

Last year this race was decided by fuel mileage. Will the caution clock prevent that from happening this weekend?

“I think the caution clock might cause the race to be broken up differently, but by the end of the race with the caution clock not in play the last 20 laps still means you could have to pit there at the end. That means some people saving fuel could definitely pay off, but it seems like the fuel mileage has gotten tightened up a little bit where everybody is sort of in the same boat, so I wouldn’t expect that. It should be more about the fastest truck and who can hold it wide open the longest.”

KBM-023: The No. 9 Liberty University team will race KBM-023, for Friday’s Toyota Tundra 250 at Kansas Speedway. This Tundra won the pole and led 151 laps at Kansas last year. With an 11-second lead, Erik Jones ran out of fuel with seven laps to go to finish 11th.