Byron Hopes to Blow Away the Competition in the Windy City 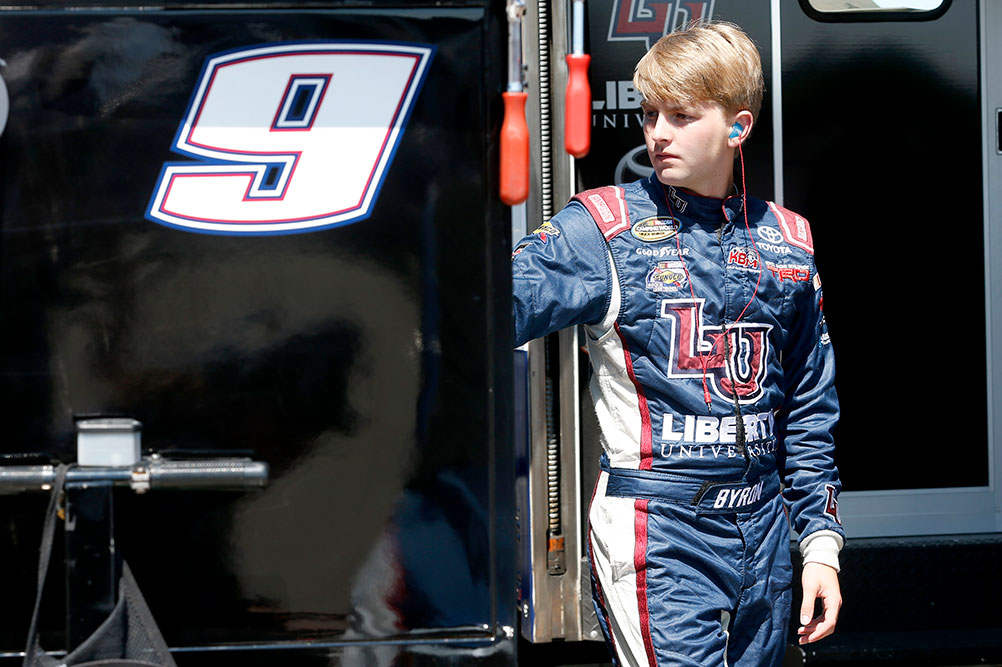 MOORESVILLE, N.C. (Sept. 13, 2016) – Friday’s race at Chicagoland Speedway in Jolliet, Ill., marks the end of the regular season for the NASCAR Camping World Truck Series (NCWTS) before starting the seven-race Chase next week. Although William Byron has never raced at Chicagoland before, he is hoping to get his sixth win of the season in the American Ethanol E15 225, and he has good reason to believe it will happen.

Two of Byron’s five wins in 2016 have come on mile-and-a-half tracks where he has never raced before. His very first win came in May at Kansas Speedway in Kansas City, a track where he had never driven a lap until the first practice the day before the race. He led 34 laps en route to his first victory in the NCWTS. He earned his second win at Texas Motor Speedway in Ft. Worth, another 1.5-mile oval, in his first appearance there. He only led six laps in that race, but one of the them was the final lap, the only one that counts.

Byron will also be driving the same Liberty University Tundra which has taken him to Victory Lane three times already this year. Chassis KBM-023 was the Tundra the Kyle Busch Motorsports team brought to both Kansas and Texas, and most recently the site of his fifth win at Pocono (Pa.) Raceway in August.

Many things are working in Bryon’s favor this weekend to blow away the competition in the Windy City. The 18-year-old rookie would like to get one more win under his firesuit belt before heading into the Chase next weekend to build momentum before going into the most important seven races of his young racing career.

Based on your past success this season, are you excited to get back to a 1.5-mile track again?
“Based on our success on the intermediate race tracks, I feel really confident that we can have a good run this weekend. I’m just really happy to get back to some normality in the schedule when it comes to the race tracks being more like the ones in the Chase. I think this will be a really important tune up for places like Las Vegas and Texas in a few weeks. There is just something about these type of race tracks that works with Rudy and my driving style, so we are both eager to unload at Chicago.”

Will you race any differently next weekend when the Chase begins than you will at Chicago?
“I don’t think I will race any differently in the Chase, because if I did I might take unnecessary risks that will hurt my chances. Luckily we’ve had a good amount of success this year and I know that if I look back at those races and how we operated, that attitude will be the best way to approach the Chase races. If we do have an off day, solid finishes will be very important, and that’s what we have been trying to put together the last few weeks.”

How have your first two weeks of college been?
“My first couple weeks of college have been exciting and also a bit stressful and new at the same time. Fortunately, I’ve had a little bit more time than normal to get settled in and accustomed to everything before the racing schedule picks back up again this weekend. I was able to go to my first Liberty football game and really see what campus life is like from a hands-on perspective.”

Is this race business as usual, or a last chance to experiment before the Chase begins?
“In my opinion, this is like a prep race for the Chase. We will approach it like it’s a Chase race, but it’s one final throwaway if we need it. Everybody is prepared mentally as if this is a Chase race. We’re going for a win, to get maximum points and maximize the best finish we can every weekend. It should be a fun race. Chicago races well, there is a lot of drafting and you have to make your truck drive well, so it should be a good race for us.”

Fugle has one win and two top-10 finishes as a crew chief in two starts at Chicagoland in the Truck Series. He won with owner-driver Kyle Busch in 2013 and finished sixth with Erik Jones in 2015.