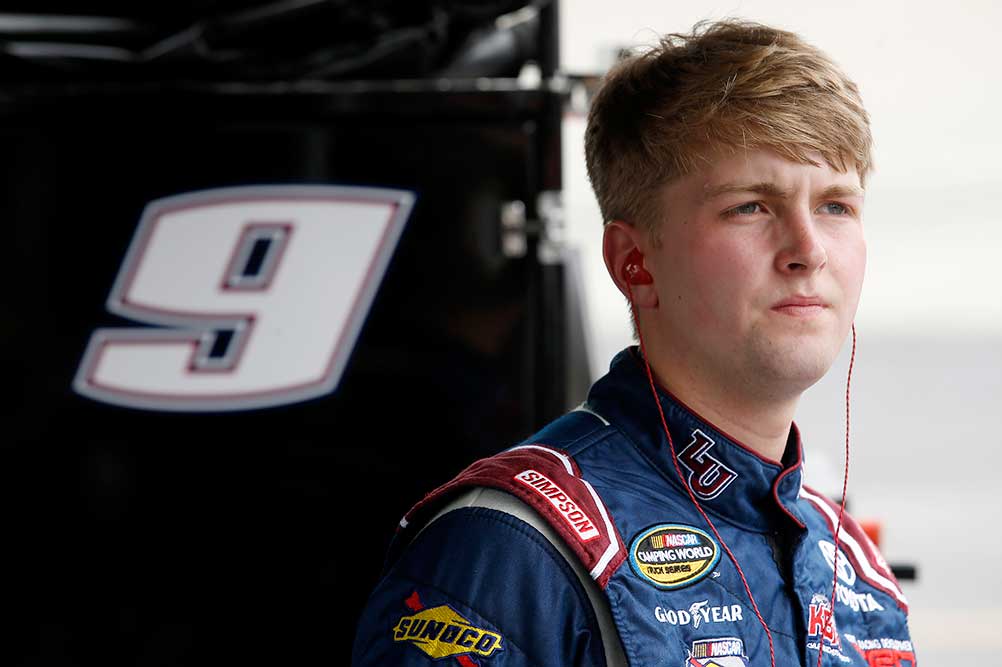 MOORESVILLE, N.C. (May 17, 2016) – Most athletes prefer playing at home and usually have an advantage when they do play a home game. William Byron is hoping that advantage translates to racing as well. Although the Charlotte, N.C., native and senior at Charlotte Country Day School will be making his first start on the 1.5-mile oval of Charlotte Motor Speedway (CMS), he’s been to victory lane there before.

Byron will also have the support of many of his classmates in the grandstands during Friday’s NASCAR Camping World Truck Series event. With high school graduation on May 27, many of his fellow seniors are attending the race to support their friend before they all head off on separate paths to college, or careers. Byron will do both in the fall, as he continues to race full time for Kyle Busch Motorsports and he will live on campus attending classes at Liberty University in Lynchburg, Va.

With one win under his belt already this season at Kansas Motor Speedway, a win at CMS would not only secure his position in the inaugural Chase, but be a memory his family, friends and classmates in attendance won’t soon forget. Although there are no goal posts to tear down in celebration like after a home football game, if Byron wins at Charlotte his post-race burnout will be a great substitute.

Being a Charlotte native, talk about racing at your home track this weekend?

“I’m really excited to race at Charlotte. I raced there on the quarter-mile track and now I finally get the shot to race on the big track. To experience that is going to be really cool. I think we have a good shot at hopefully getting another win based on how the last mile-and-a-half went and hopefully that leads to more success.”

What do you think are the similarities between Kansas and Charlotte?

“I think just the aero will be similar, but the tracks are different. I’ll know better once I’m able to get out and run some laps at Charlotte, but I think the biggest thing will be the aero and the importance of track position. It’s a lot easier to stay up front than it is to have to work your way up there.”

How big of a cheering section will you have in the grandstand Friday night?

“It’s going to be big. Most of the senior class is coming from my high school (Charlotte Country Day School). I think they will really enjoy it and are in for a treat to see what it’s like at a race since many of them have never been. My parents also have some friends coming, so we should have a pretty good cheering section in the stands.”

What are your expectations for William at Charlotte?

“There will be high expectations for William this weekend, especially being Charlotte with a lot of family and friends attending the race. We also have the extra motivation to beat the boss (Kyle Busch). We expect to run well. We’re going to try out some new stuff and keep trying to lead laps. Despite them both being 1.5-mile tracks, Charlotte is not very similar to Kansas, it doesn’t overlay at all. What will help is his experience with the aero on a 1.5-mile track.”

KBM-021: The No. 9 Liberty University team will race KBM-021, for Friday’s N.C. Education Lottery 200 at Charlotte. This truck has eight wins since 2013 and was most recently raced by Byron at Atlanta Motor Speedway in February.