Byron Goes for Three in a Row at Gateway 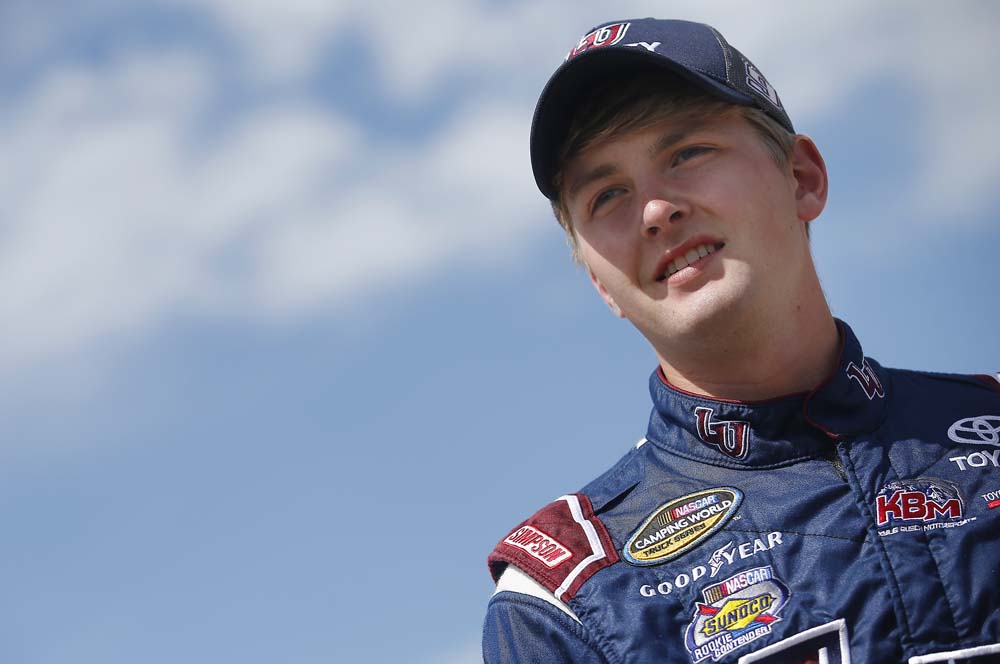 MOORESVILLE, N.C. (June 21, 2016) – The Gateway Arch in St. Louis was built as a monument to the westward expansion of the United States. The arch is visible from Gateway Motorsport Park in Madison, Ill., where rookie driver William Byron looks to expand his current winning streak in the NASCAR Camping World Truck Series (NCWTS). Byron, who graduated from high school less than a month ago, has won three of the last five races and the last two consecutive races at Texas Motor Speedway and Iowa Speedway. This weekend Byron goes for three.

The 18-year-old has impressed and surprised many people by finding success so quickly, not just in the NCWTS, but in nearly every division in which he’s raced. In his first season in the NASCAR K&N Pro Series East in 2015, he won Rookie of the Year and more importantly the series’ championship. With three wins in the first eight races and a sizeable lead in the Sunoco Rookie of the Year standings, Byron may be on track to accomplish that feat again.

Byron has no experience at Gateway, but that does not seem to make a difference. He had never raced at Kansas Speedway, where he claimed his first win this season, or Texas where he roped his second win. He seems to have no trouble adapting to new tracks, thanks in part to his crew chief, Rudy Fugle, who led Erik Jones to the driver’s championship last year. Fugle has a knack for working with young rookies and helping them realize their full potential in the Truck Series.

This weekend Byron and Fugle both have their sights set on the trophy at Gateway. Byron wants his third-consecutive win and Fugle wants to make up for a few wins that got away from Kyle Busch Motorsports (KBM) in previous years. Last year Jones won the pole and led 84 laps in the same Tundra the team has prepared for this weekend, but was taken out of contention late in the race. A similar incident occurred in 2014 making Fugle and the KBM team even more hungry for a win at Gateway.

Based on their momentum and perseverance, the No. 9 Liberty University Tundra may very well end up in Victory Lane Saturday night at Gateway, expanding Byron’s rookie lead and his experience leading up to the inaugural Chase races later this season.

Do you believe in momentum after winning three of the last five races?
“I’ve always believed in that just from watching races on television and seeing how drivers take that focus to the next weekend, but I think it’s really a confidence thing. It’s knowing that you can do it, and knowing when it comes down to a final restart you’ve got it under control. Last weekend when the caution came out with eight laps to go, I had to be ready for the final restart. Back at Kansas I wouldn’t have had that confidence in myself that I could get a good restart and hold on for the win, but now I do. I’ve learned a lot, but it’s also a mental thing and how you approach it.”

How have your goals changed since winning three races so early in the season?
“We have exceeded what we thought we’d do, but I don’t think we set a goal for a certain number of wins. Based on the last couple of years I didn’t know how long it would take to get that first win. I thought maybe it would take 10-15 races, or more just based on how long it’s taken other guys. I only had that one race at Phoenix to base it off of and that didn’t go great, so I was in a vulnerable position. I just wanted to finish races at first, so to now have the wins allows us to focus on more opportunities and goals and get ready for the Chase which will be so intense.”

Talk about the Toyota Tundra you are bringing to Gateway this weekend:
“Since our win in Iowa, every Tundra in our fleet has won a race at some point over the years. The truck we are taking to Gateway is what I think is our best short-track truck. Gateway has eluded us the last two years. We’ve had the best truck with Erik (Jones) but something has happened the last couple laps the last two years and we’ve lost it. It’s a pretty big deal for us to go try to win this one.

KBM-024: The No. 9 Liberty University team will race KBM-024, for Saturday’s Drivin’ for Linemen 200 at Gateway. Erik Jones drove this Tundra to victory lane at Phoenix in 2014. Byron has not raced this truck yet in 2016.

Fugle has one pole (Erik Jones, 2015) as a crew chief in only one start at Gateway in the Truck Series. Fugle’s team led 84 laps in last year’s race before being forced out of competition early with electrical issues.