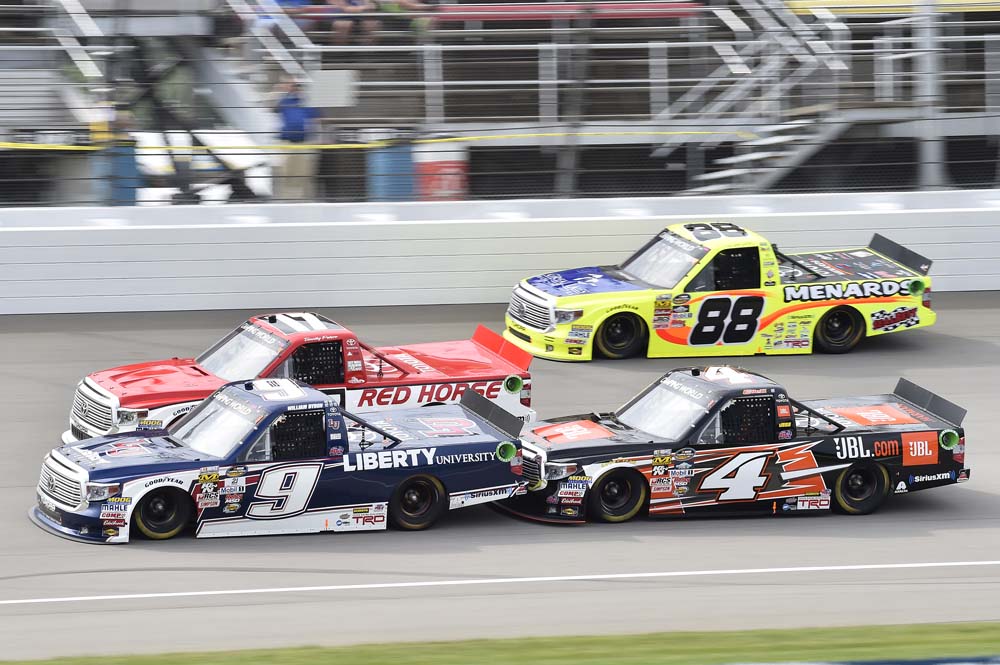 Saturday’s NASCAR Camping World Truck Series race at Michigan International Speedway in Brooklyn looked more like a race at Daytona. With drafting playing a big role and side-by-side racing all day, the drivers put on quite a show for the fans. William Byron had a shot at winning his sixth race of the season, but was shuffled back to fourth on the final lap of the race.

After over a two-hour delay due to rain just before the race, the 100-lap event finally went green with Byron starting his Liberty University Tundra in third place. He and fellow Toyota driver Timothy Peters battled for the lead early, until a series of cautions put the teams on different pit strategies. 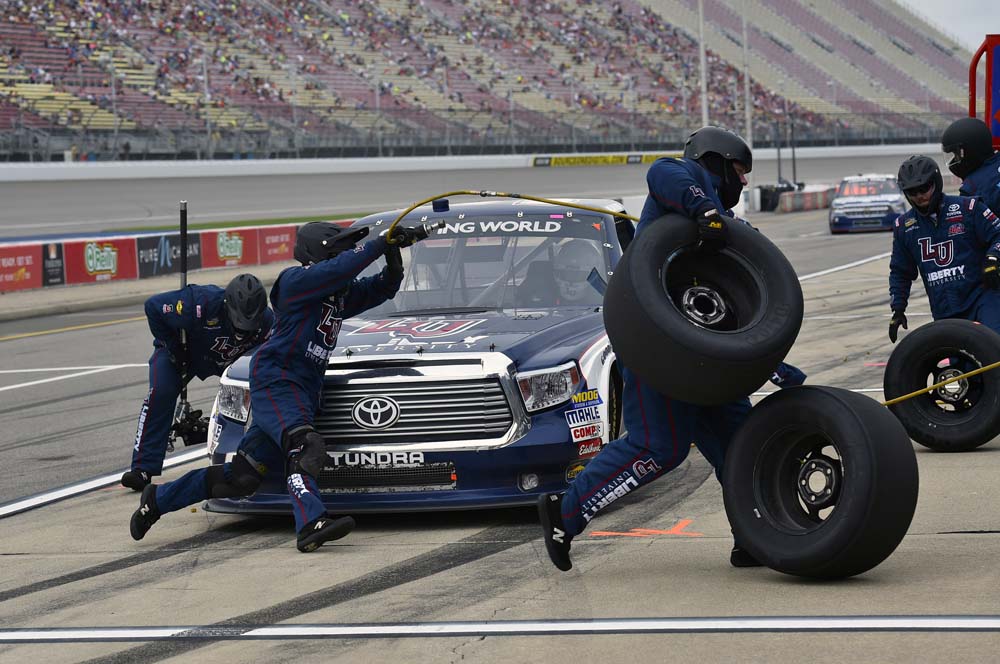 Crew chief Rudy Fugle gambled on pit strategy at the halfway point of the race. While under caution he called Byron to pit road for four tires and fuel just before the race resumed, which dropped him back to 25th for the restart on lap 56. With a fast Tundra, Byron did not stay back there for long. In less than 10 laps he was back in the top 10, and another caution on lap 64 played right into the team’s strategy. While many of the leaders had to pit for tires, Byron was able to stop for fuel only which put him back onto the track in fourth place.

Things got wild in the final 30 laps of the race as several trucks wrecked in different incidents while running up front. The final restart came with eight laps to go and once again Byron battled Peters for the lead. Byron had the lead on the final lap as he and Peters raced side-by-side for the win. Suddenly Peters’ teammate Brett Moffitt got a run and passed both of them. Byron crossed the finish line in fourth place.

“It was pretty good, I think we just had to go there when we got side-by-side with the 17 (Timothy Peters), so I had to try to make that work and we were side drafting really hard,” Byron said. “Fourth is good and I’m happy for Brett (Moffitt), that was a great win. With the drafting out there, it’s pretty crazy. I had a fast Liberty University Tundra and hopefully we can get a win at Mosport next weekend.”

Moffitt won his first Truck Series race, followed by Peters, Daniel Hemric, Byron and Cameron Hayley rounded out the top five. KBM’s Christopher Bell was 24th after a late-race accident going for the lead and Cody Coughlin was 20th. Byron continues to lead the rookie standings, as well as the driver point standings.

The Truck Series goes international next Sunday, September 4 at the road course of Canadian Tire Motorsport Park. Live coverage of the Truck Series race will air on Fox Sports 1 at 2:30 p.m. ET.