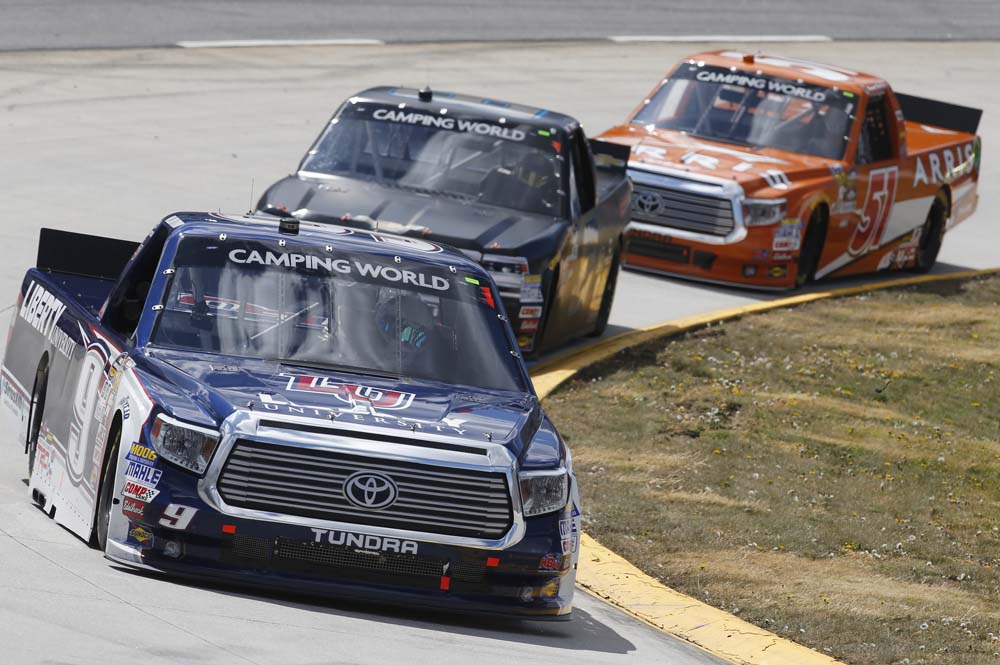 William Byron had only raced at Martinsville Speedway once before, in a Late Model in 2014. His lack of experience there certainly did not show Saturday as he battled with several veterans to cross the finish line in third place for his best NASCAR Camping World Truck Series (NCWTS) finish in only four starts.

Byron started his No. 9 Liberty University Tundra seventh and moved up as high as fourth despite fighting a loose condition. The crew made adjustments throughout the race to help him, but by halfway he had fallen back to 12th place.

With patience and perseverance, Byron worked his way back up to fifth place by lap 200. His Tundra was improving and he told the team “it was a little tight, but the best it had been all day.” With 25 laps to go he was in fourth place and was able to survive three cautions in the final 20 laps, two of which brought out the red flag to clean debris off the track.

The final caution came on lap 246, sending the race into overtime. Byron restarted third behind his owner and teammate Kyle Busch and John Hunter Nemecheck for the green-white-checker finish. When the green flag flew Byron tried to stay tucked behind Busch on the restart, but Nemecheck was able to fall in line between them, leaving Byron in third place when the race ended.

“It was a long race,” Byron said. “We started out really loose and then we made a few adjustments and kind of fell back to 11th or 12th. Our biggest struggling point was like midway through the race and then we started to really come on strong the last 80-90 laps, and really got good to where we could drive up to the front. I wish we could have done something on the last couple of restarts, but we were just a little too tight.

“It was a great race for our team. I have to thank everyone at Kyle Busch Motorsports (KBM), Liberty University and Toyota for their continued support. I’m pumped for Kansas next month.”

Busch won the race, his first in any NASCAR series at Martinsville. He was followed by Nemechek, Byron, Sprint Cup regular Kyle Larson and NCWTS veteran Timothy Peters. Byron’s other KBM teammates Daniel Suarez finished 18th and Christopher Bell 19th.  Byron moved up 14 positions in the driver point standings and is now back up to 12th.

The Truck Series takes a few weeks off again and will return to action on Friday, May 6 at Kansas Speedway. Live coverage of the Truck Series race will air on Fox Sports 1 at 8:30p.m. ET.