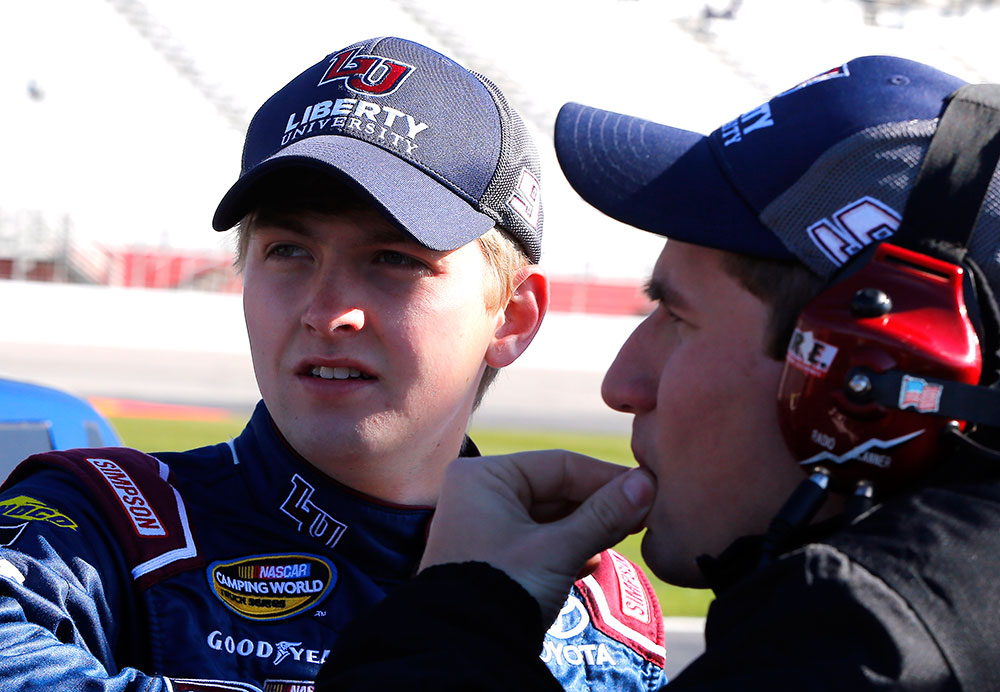 MOORESVILLE, N.C. (March 29, 2016) – Obviously William Byron wants to run well everywhere he races, but a strong showing at Martinsville (Va.) Speedway would mean a lot to the 18-year-old rookie. After having a month to think about falling out of the Atlanta race early due to engine trouble while running in second place, Byron looks to put that behind him and focus on running up front and finishing there this weekend.

Byron has one prior start at the half-mile track in a Late Model race in 2014. In only his second year of racing, he qualified 11th out of 80 entries, but finished 18th after getting caught in a wreck during the race. For this trip to Martinsville he won’t have to worry about competing against 80 other drivers, but for the first time he will be competing against his owner and teammate, Kyle Busch. Byron is looking forward to racing with and against Busch this weekend. He plans to learn everything he can from Busch’s knowledge and experience at the “Paperclip.”

Byron has another reason to finish up front on Saturday. His primary sponsor, Liberty University, is located just 80 miles northeast of Martinsville in Lynchburg, Va. He spoke at the Liberty University Convocation with over 13,000 students in attendance and thousands more watching online and on television, it is North America’s largest weekly gathering of Christian students. He talked about how he started racing and encouraged them to attend the Camping World Truck Series race on Saturday. He hopes to have a large cheering section of students in the grandstands, who will also be his peers in the fall when he plans to live on campus as a freshman.

While he may have been a bit nervous speaking in front of such a large group of people last week, he’s not worried about nerves this weekend. Byron is ready to be back in the driver’s seat of his No. 9 Tundra to get the solid finish which has eluded him so far this season.

What did you think will be the most challenging thing about the track?

“I remember how easy it was to overdrive the race car at Martinsville. It is a very technical track and I enjoyed racing there in the Late Model. The most challenging thing about the track will be managing the tires throughout a run, but still going hard enough to make up ground and keep track position early in the runs. I can’t wait for the race so that we can build on what we have worked on since the last time out.”

Are you looking forward to racing against your owner, Kyle Busch this weekend?

“Racing against Kyle Busch this weekend is a great opportunity to learn from him. Any opportunity I get to run against a Sprint Cup Champion is a good chance to see where I stack up and what I need to work on.”

What have you been doing the past month since the Atlanta race?

“Besides going to school, I raced a KBM late model in Alabama two weeks ago. We were able to get a solid run under our belt with a top five. Other than that I spoke at the Liberty University Convocation and spent time up there filming a few neat commercials last week.”

What will you focus on during practice Friday to prepare William for 250 laps at Martinsville?

“The extra practice session and extra set of tires will be good for William to get used to radial tires at a short track. He’s got a ton of short-track experience and he’s really good at them, so I think we have a really good chance of excelling. In the first practice he needs to get used to how a truck handles around Martinsville, and then we’ll probably try a couple of things we normally wouldn’t have time to try. Then we’ll get it dialed in so he knows what it feels like on new tires and old tires to be able to handle the long race.”

KBM-031: The No. 9 Liberty University team will race KBM-031, for Saturday’s Alpha Energy Solutions 250 at Martinsville Speedway. This Tundra was built in 2015 and raced three times. Its best finish was sixth with Erik Jones at the wheel at Chicagoland.