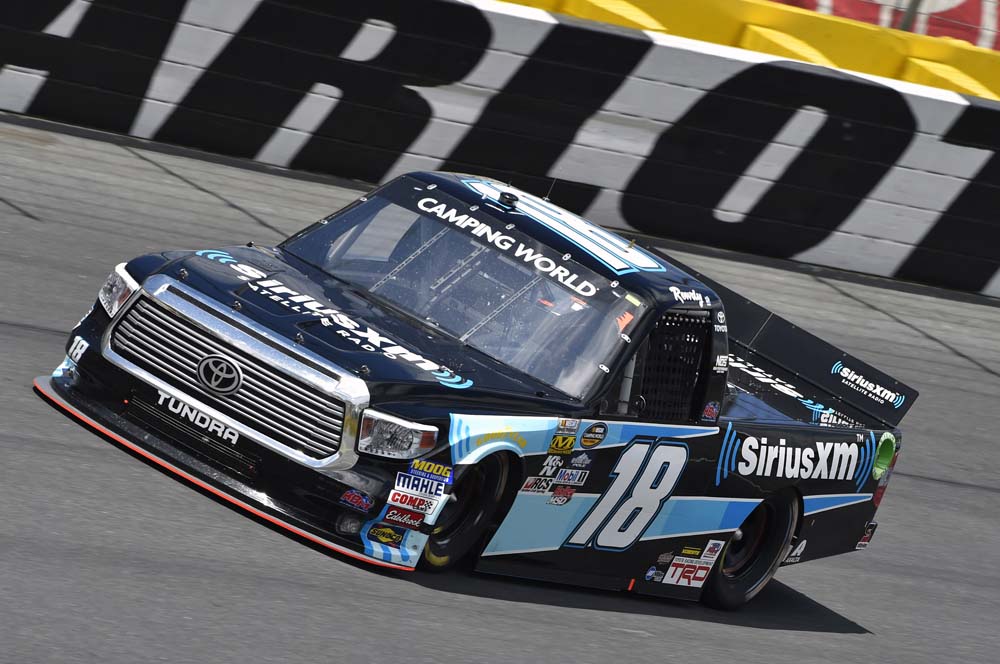 Kyle Busch led four times for 27 laps Saturday in the N.C. Education Lottery 200 NASCAR Camping World Truck Series race at Charlotte (N.C.) Motor Speedway and made a valiant comeback from a pit- road penalty just past the halfway mark of the 134-lap event, but had to settle for a runner-up finish after a late-race stop for a splash of fuel.

After being penalized for an uncontrolled tire during a pit stop, Busch restarted from the 23rd position on lap 71. He was able to maneuver the No. 18 SiriusXM Tundra back to the front of the field with nine laps remaining, but was forced to visit pit road with eight laps remaining for a splash-and-go stop a lap later. He was scored in the seventh spot when he returned to the track and was able to gain five spots over the final five laps of the race, but finished 5.748 seconds behind race winner Matt Crafton.

“Thanks to SiriusXM Satellite Radio, Toyota and all the guys at KBM (Kyle Busch Motorsports) that built this thing,” said Busch, who recorded his eighth top-two finish across 10 Truck Series starts at CMS. “It’s one of our newer Tundras. It was okay, but once I think we had a part failure it wasn’t very good at all, so we have to go back and do our homework. I don’t know if something came out of place on the frontend or what.”

Busch started the race from the fifth position after qualifying was washed out Friday and the starting grid was set by speeds in Thursday night’s practice session per the NASCAR rule book. When Spencer Gallagher spun his tires on the inside of row one coming to the green flag, the inside lane got held up and the No. 18 SiriusXM Tundra fell back to the 11th position after the field completed lap 1. ‘Rowdy’ began his march forward from there, advancing all the way to the second position by the time the first caution of the race slowed the field on lap 22. 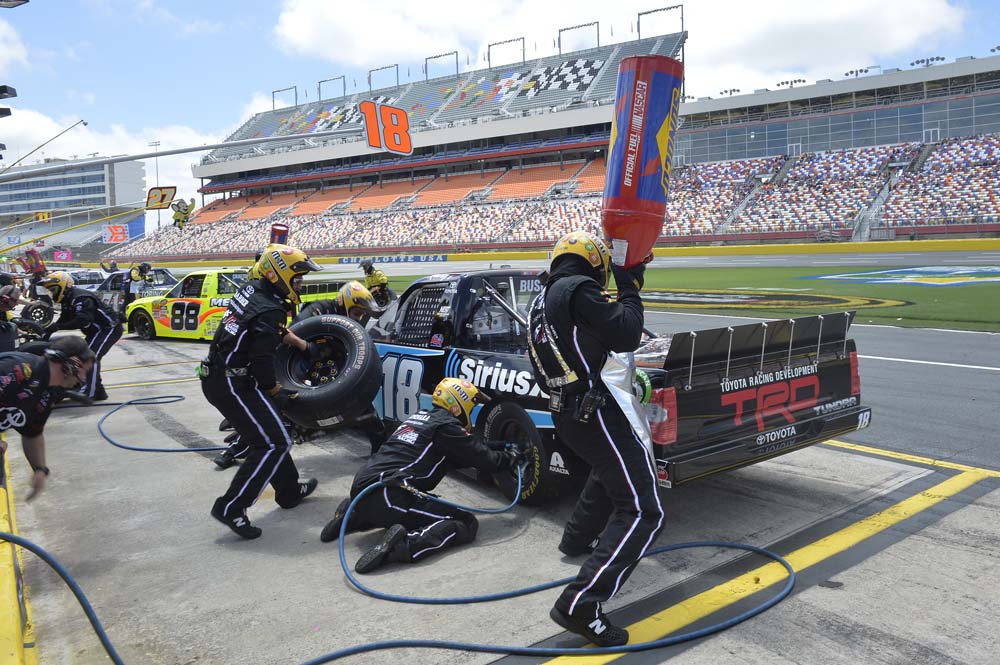 After visiting pit road for four fresh tires, a full tank of fuel and a trackbar adjustment, Busch returned to the track scored in the second position for the lap-28 restart. One lap later he led for the first time and he remained out front until lap 40 when Daniel Hemric worked his way to the front of the field. Busch communicated that his SiriusXM Tundra was getting “looser as we go,” but was able to reel Hemric back in on lap 57 and led until the field was slowed for the second time on lap 67.

Crew chief Wes Ward ordered up a four-tire and fuel stop with air pressure adjustments to improve the handling of his Tundra. Shortly after Busch returned to the track at the completion of the pit stop, NASCAR informed the No. 18 team that they would be sent to the tail end of the field due to an uncontrolled tire.

The Las Vegas native restarted from the 23rd position on lap 71. Ten laps later he had advanced 10 spots, but alerted the team that his Toyota was “horrible tight” and believed that they might have had a parts failure in the front of the truck. Busch was running just outside the top five with 25 laps remaining as the team prepared for a final adjustment, but the race reached 20 laps remaining just before the caution clock was set to expire and per NASCAR rules the race continued under green-flag conditions.

Ward alerted Busch that they were about seven laps short on fuel. As teams began to pit for the final time, Busch moved into the top three and inherited the lead on lap 125. He was forced to pit himself one lap later for a splash of fuel and. The race remained caution free until the end and Busch saw his four-race Truck Series winning streak snapped at Charlotte.

Matt Crafton picked up his second consecutive win in 2016 and the 13th of his Truck Series career. Busch finished 5.748 seconds behind Crafton in the runner-up spot. Johnny Sauter, Tyler Reddick and Matt Tifft rounded out the top-five finishers.

Christopher Bell overcame a mid-race spin to finish eighth in his No. 4 Toyota Tundra. William Byron led the first 15 laps of the race in the No. 9 Liberty University Tundra and came home 10th. Daniel Suarez and his No. 51 ARRIS Tundra team rolled the dice on fuel mileage late in the event, but had to surrender the lead with three laps remaining when he ran out of gas and ended up finishing 23rd.

The sixth race of the 2016 season featured three cautions for a total of 14 laps. There were 14 lead changes among nine drivers, including Busch who led four times for 27 laps.

The next scheduled event for the No. 18 team’s part-time effort is July 7 at Kentucky Speedway in Sparta.