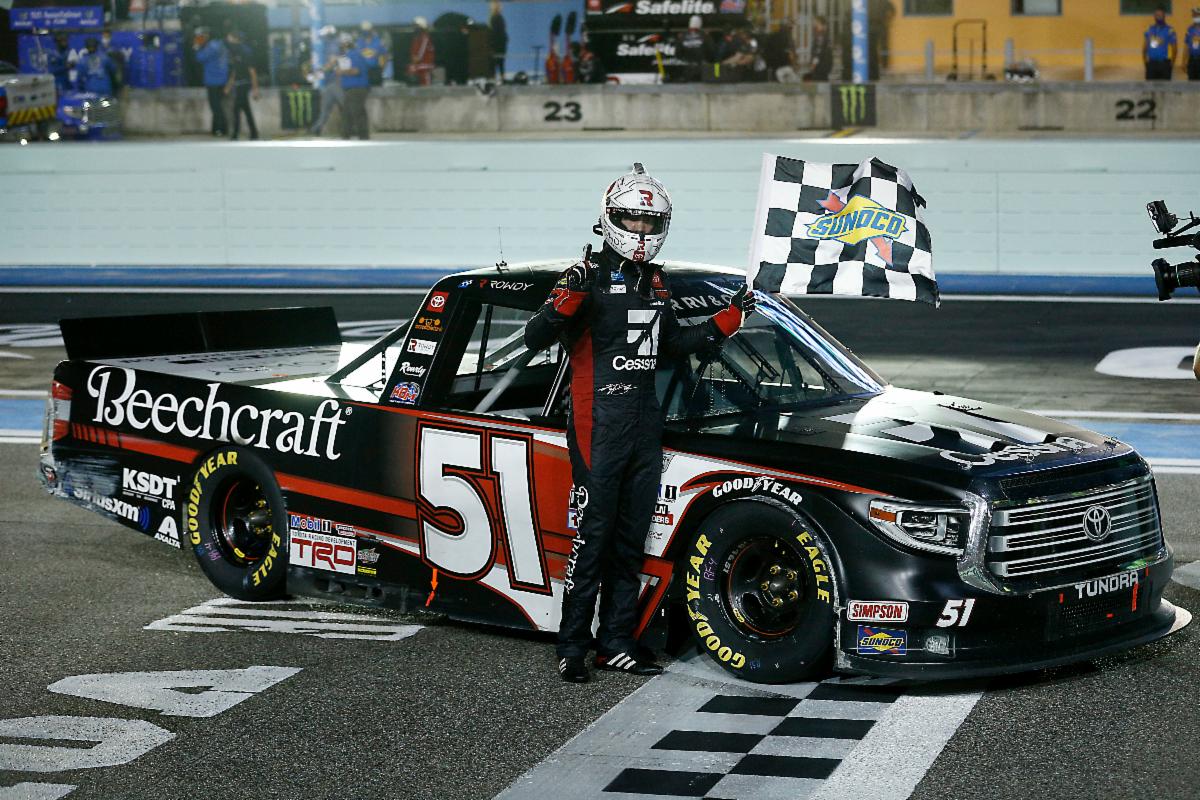 Kyle Busch overcame serving a pass-through penalty at the start of Saturday night’s Baptist Health 200 to pick up his record-extending 58th win in the NASCAR Gander RV & Outdoors Truck Series. Despite serving the penalty on lap one and then brushing the wall while trying to remain on the lead lap in the early stages of the event, he was able to put the Cessna Tundra out front for a race-high 82 laps en route to his second Gander Trucks victory this season and his 211th win across NASCAR’s top three divisions.

How concerned were you with other trucks restarting behind you with fresher tires?

“You’re always concerned about tires being better and having the opportunity to out-show you. Felt like six laps was just the right amount and any more than that, it probably would have been a different outcome. Can’t say enough about this Cessna Beechcraft Toyota Tundra, it was awesome tonight. It’s been awesome all year, we’ve just had some fluke things that have kind of taken us out of the running. The last restart there with Ross (Chastain) behind me, he got a good launch and I got a good shove from him down the frontstretch and then there was room there in the middle for him. Obviously, here we go. Had to give him room and we just tried to race it out on the outside and see what happens off of turn two. Just able to get that momentum off the outside. I didn’t lift much through the corner and just got that run and then those guys got side-by-side and that let me get away. Really good race for us and proud of everybody at KBM, proud of the effort. I know we’ve got issues and we’ll continue to work on that and get better.”

Was this good medicine for the last couple races after being able to make it back from the penalties to start the race?

“Yes and no. We’ve thrown away the last two races. This is how we’re supposed to perform and run and look. The deal with the infraction was a fluke deal, that’s how these trucks were allowed to run last time we were down here in Homestead. This thing has just been sitting on the side waiting for me to get behind the wheel of it and it didn’t go to the fab shop so it didn’t get a bar cut out that was legal here last year and not legal here this year. Not sure there was a performance advantage to it, just something we’ve been running and not allowed to do it anymore.”

What was your mindset going into the race knowing you had to start at the back of the field?

“Nothing we were going to do about it so we just had to work on what we had thrown at us and what we were going to have to overcome. I knew the Cessna Beechcraft Toyota Tundra here was going to be awesome. Thanks to TRD and Rowdy Energy, everybody that helps us here and makes us so fast and want to say thanks to Big Machine Hand Sanitizer as well, they were on the quarter panel the last two weeks and we didn’t win and now they’re not here and we won. I think there’s something to that and I am a bit superstitous. Just trying to remain calm and knowing that we had a fast piece. We actually thought and we timed it out, that I was going to be a lap down. When it all shook out to where I wasn’t a lap down, we were like, ‘Okay, let’s just roll here, we’re going to be fine and that changes the complexion entirely of what we thought we were going to have to do.”

Gander Trucks Championship Standings:  The No. 51 team remains atop the NASCAR Gander RV & Outdoors Series standings. After five races, including two wins, the No. 51 team leads the No. 16 team by nine tallies.

Next Race:  Brandon Jones will be behind the wheel of the No. 51 DuPont Air Filtration Tundra when the NASCAR Gander RV & Outdoors Truck Series resumes action June 27 at Pocono (Pa.) Raceway. Live coverage of the race begins Saturday at 12:30 p.m. ET on FS1.