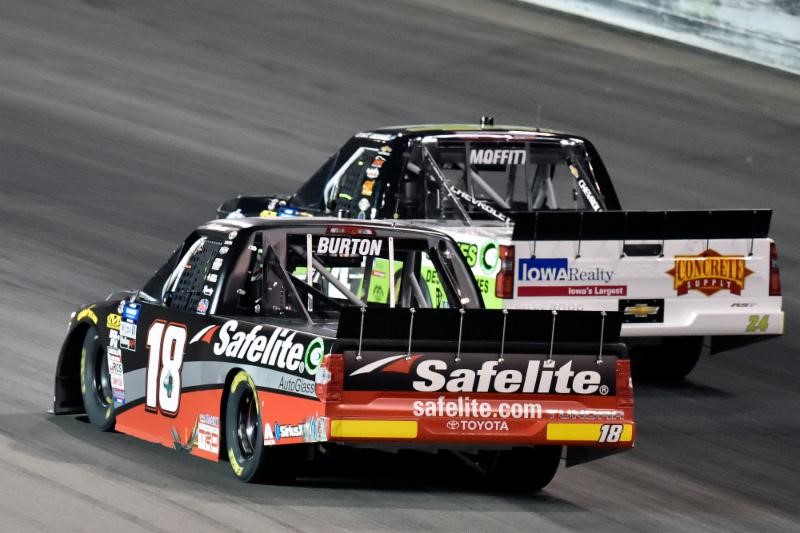 Harrison Burton was running third when the final round of pit stops took place in Saturday night’s CarShield 200 NASCAR Gander Outdoors Truck Series event at World Wide Technology Raceway. After the top two trucks pitted, Burton assumed the lead for two laps before being summoned to pit road for a left-side tire and fuel stop with 25 laps remaining.

After stops cycled through Burton was running in the fifth position and as he raced side-by-side with Sheldon Creed, got the air taken off his truck and snapped loose. As Burton corrected his path and appeared to make a great save, he got clipped in the right rear and the No. 18 Safelite AutoGlass Tundra went sliding up into the outside wall. After coming to pit road for repairs and four fresh tires, the 18-year-old driver was forced to limp home to a 16th-place finish.

Burton remained sixth in the Gander Trucks championship standings. After 11 races he finds himself 116 tallies behind points leader Grant Enfinger. He currently sits in the eighth and final spot on the playoff grid

Burton will be back behind the wheel of the No. 18 Safelite AutoGlass Tundra when the NASCAR Gander Outdoors Truck Series resumes action June 28 at Chicagoland Speedway in Joliet, Ill. Live coverage of the Camping World 225 begins Friday at 9 p.m. ET on FS1.