Burton Reaches Another Milestone with First Truck Start at Martinsville 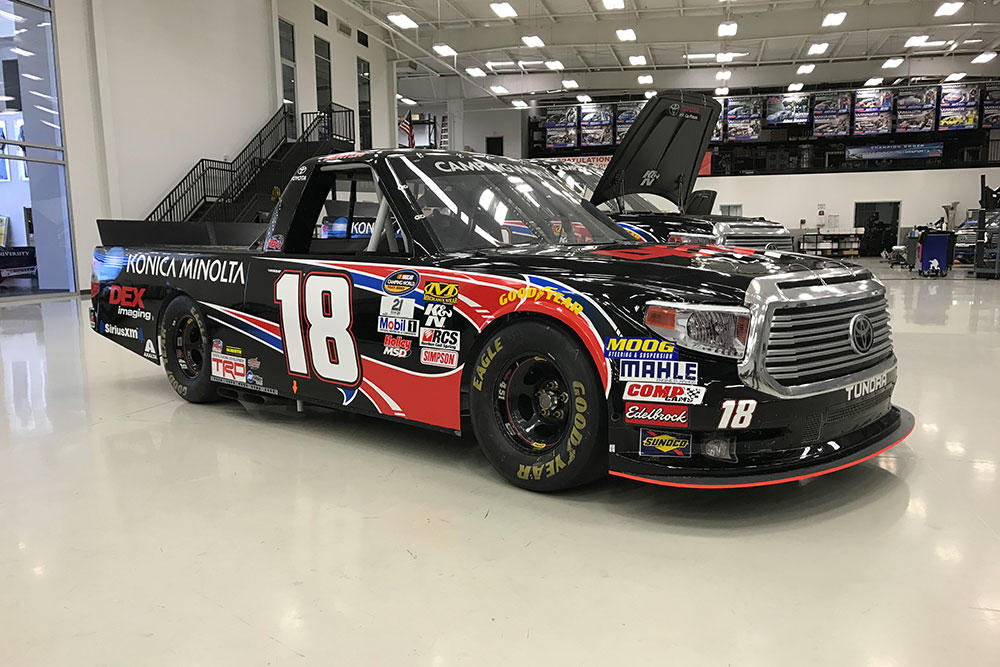 MOORESVILLE, N.C. (Oct. 25, 2016) – Harrison Burton is set to make his NASCAR Camping World Truck Series debut this Saturday at Martinsville (Va.) Speedway in the Texas Roadhouse 200. The second-generation racer has found success in many different series at the young age of 16, and now makes his move up to the Truck Series with Kyle Busch Motorsports (KBM). Burton will drive the No. 18 DEX Imaging Tundra led by racing veteran Wes Ward as crew chief.

Burton, the son of 21-time NASCAR Sprint Cup Series winner and current NBC Sports broadcaster Jeff Burton, competed full time in the NASCAR K&N Pro Series East in 2016 where he earned one top-five, five top-10 finishes and one pole in 14 starts in his rookie season. In addition to his full-time schedule in the K&N Pro Series East this season, Burton won three Super Late Model events, including a Southern Super Series Blizzard Series race at Five Flags Speedway in Pensacola, Fla. He also posted a runner-up finish in January at 2016 SpeedFest at Crisp Motorsports Park in Cordele, Ga., against a field that included KBM owner-driver Kyle Busch and KBM Truck Series driver William Byron. This summer Burton finished third in his first ARCA Racing Series start at Iowa Speedway in Newton in July.

The racing prodigy was a three-time USAC Quarter Midget national champion before moving into Late Models, where at the age of 11 he captured his first pole in the Limited Late Model division at Ace Speedway in Elon, N.C. At the age of 12, he graduated to Pro-Late Models and won two races at Dillon (S.C.) Motor Speedway.

At the age of 14, the talented teenager became the youngest driver to win a NASCAR Whelen Super Late Model event when he visited victory lane twice during the World Series of Asphalt Stock Car Racing at New Smyrna (Fla.) Speedway last February and in May he picked up his first Southern Super Series win at Mobile (Ala.) International Speedway. Last October, at the age of 15 years and eight days, Burton became the youngest driver to compete in the NASCAR K&N Pro Series West when he raced in the series stop at All American Speedway in Roseville, Calif.

Now Burton looks to find success and add his name to the record books in the NASCAR Camping World Truck Series.

Harrison Burton, Driver of the No. 18 NCWTS DEX Imaging Tundra:

Talk about making your first NCWTS start this weekend at Martinsville?
“I’m really excited about making my first Truck Series start at Martinsville. This is a huge opportunity with a great team like Kyle Busch Motorsports. I’ve raced in a lot of big races during my young career and I will look to that experience to help me make this transition.”

What advice has your dad, Jeff Burton, given you about racing at Martinsville?
“My Dad said that protecting the bottom is huge at Martinsville. We watched tape and it gets crazy there. So, he says you have to be cautious, but very assertive while protecting the bottom. He also told me that since this is my very first truck race and I am 16, I need to soak in this opportunity to learn and gain experience and the respect of the other drivers.”

What will you consider a success for your first truck race?
“Obviously, everyone wants to go out and win, but I think if I can have a good qualifying result, have good restarts and keep the fenders on my DEX Imaging Tundra through the whole race, I can be in good position with 20 to go and then anything can happen. My focus is learning the truck, the track and the guys I am racing with and then applying that as the race comes to the finish.”

What is your strategy for Harrison this weekend since it’s his first NCWTS race?
“I want to see Harrison run every lap, try to keep his nose clean and learn. Starting your first Truck Series race at Martinsville is pretty tough for anybody, but I think he’s talented enough to get through it and we’re excited about racing with him this weekend.”

KBM-036: The No. 18 DEX Imaging team will race KBM-036 for Saturday’s Texas Roadhouse 200. This is the same Tundra Kyle Busch finished second with at Charlotte (N.C.) Motor Speedway in May.

The ‘Ward’en:
Veteran crew chief Wes Ward is currently in his second season at Kyle Busch Motorsports, where in addition to overseeing the efforts of the No. 18 team’s part-time schedule this season, he serves as the shop foreman. Ward picked up his first career Truck Series victory with Kyle Busch behind the wheel at Martinsville (Va.) Speedway earlier this season, and his second with Busch at Chicagoland Speedway in Joliet, Ill., in September. The North Carolina native became a fixture in the NASCAR XFINITY Series garage beginning in the late 1990’s and over the course of 16 years called the shots for over 300 races working with notable drivers such as Dale Jarrett, Kasey Kahne, Kenny Wallace, Jason Keller and Brad Keselowski. Ward’s lone XFINITY Series win came with Kahne in the 2003 series finale at Homestead-Miami (Fla.) Speedway.

Ward claimed his first victory at Martinsville with Kyle Busch in April when Busch led 123 of 255 laps.